After NAHB’s optimism rebounded sharply earlier this week, all eyes are on this morning’s existing home sales data for any signs of optimism. Alas, with consensus expecting a tiny rebounding in January following December’s sharp drop, the deterioration in the US home market continued continued, and January existing home unexpectedly dropped 1.2% (exp. +0.2%), to 4.94 million, missing expectations of a rebound to 5.00 million. 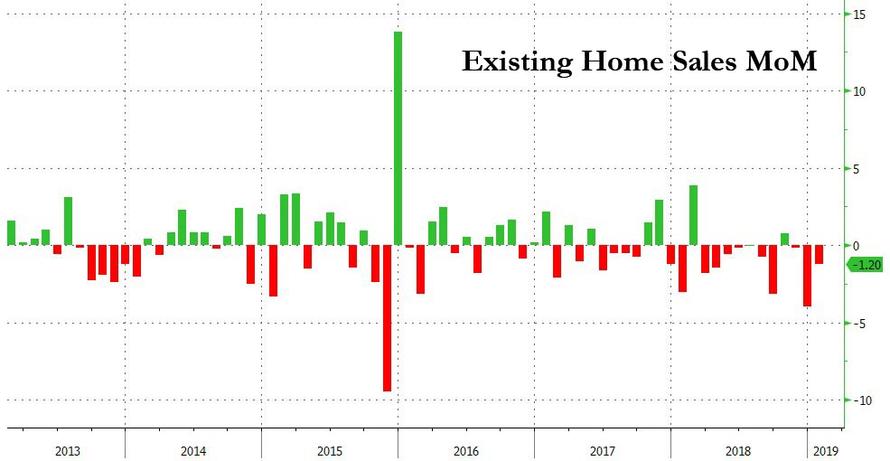 After December’s revision higher to 5.00 million, the January SAAR of 4.94 million was the first sub-5MM print since 2015, while the parallel pending home sales series confirms even more weakness is in store. 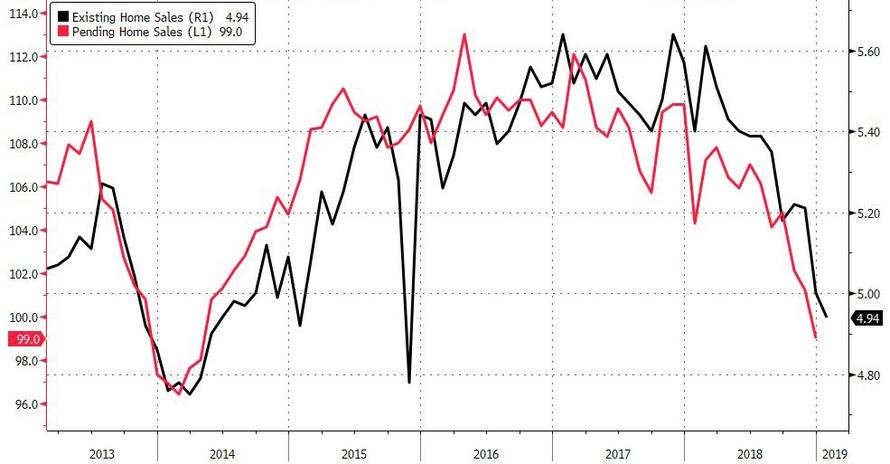 Needless to say, it is very troubling that Americans are unable to afford home purchases with the 30% mortgage at just 4.5%, and suggests that even if inflation picks up, the Fed may have no choice but to keep rates flat to avoid a housing market crash.

As usual, NAR chief economist Larry Yun was optimistic, saying that he does not expect the numbers to decline further going forward. “Existing home sales in January were weak compared to historical norms; however, they are likely to have reached a cyclical low. Moderating home prices combined with gains in household income will boost housing affordability, bringing more buyers to the market in the coming months.”

One wonders what “gains in household income” he is talking about.

Meanwhile, properties are failing to sell as the slowdown spreads: Properties remained on the market for an average of 49 days in January, up from 46 days in December and 42 days a year ago. Thirty-eight percent of homes sold in January were on the market for less than a month. 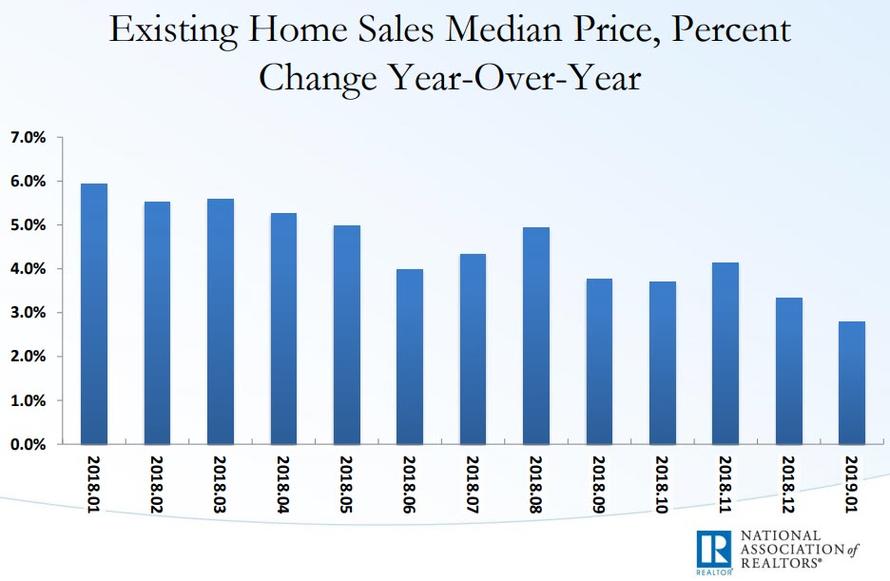 Even so, Yun noted that this median home price growth was the slowest since February 2012, and is cautions that the figures do not yet tell the full story for the month of January. “Lower mortgage rates from December 2018 had little impact on January sales, however, the lower rates will inevitably lead to more home sales.”

While total inventory grew for the sixth straight month, Yun says the market is still suffering from an inventory shortage. “In particular, the lower end of the market is experiencing a greater shortage, and more home construction is needed,” says Yun.

“Taking steps to lower construction costs would be a tremendous help. Local zoning ordinances should also be reformed, while the housing permitting process must be expedited; these simple acts would immediately increase homeownership opportunities and boost local economies.”

With existing-home sales accounting for about 90% of U.S. housing, it would seem Jay Powell’s dovish tilt just got more support, but at what point does bad news flip to being ‘bad news’ as growth hopes get hammered.