U.S. oil production fell in July, another worrying sign for the shale industry.

The latest EIA data shows that oil output fell sharply in July, dipping by 276,000 barrels per day. The decrease can be chalked up to outages related to a hurricane that forced oil companies to temporarily idle operations in the Gulf of Mexico. Offshore Gulf of Mexico production plunged by 332,000 bpd in July.

As a result, the dip in output might easily be dismissed as a one-off aberration. However, U.S. output has stagnated in 2019, ending several years of explosive shale growth. Compared to December 2018, total U.S. production was only up 44,000 in June 2019, which essentially means that despite heady forecasts and lots of hype, U.S. shale has plateaued this year. 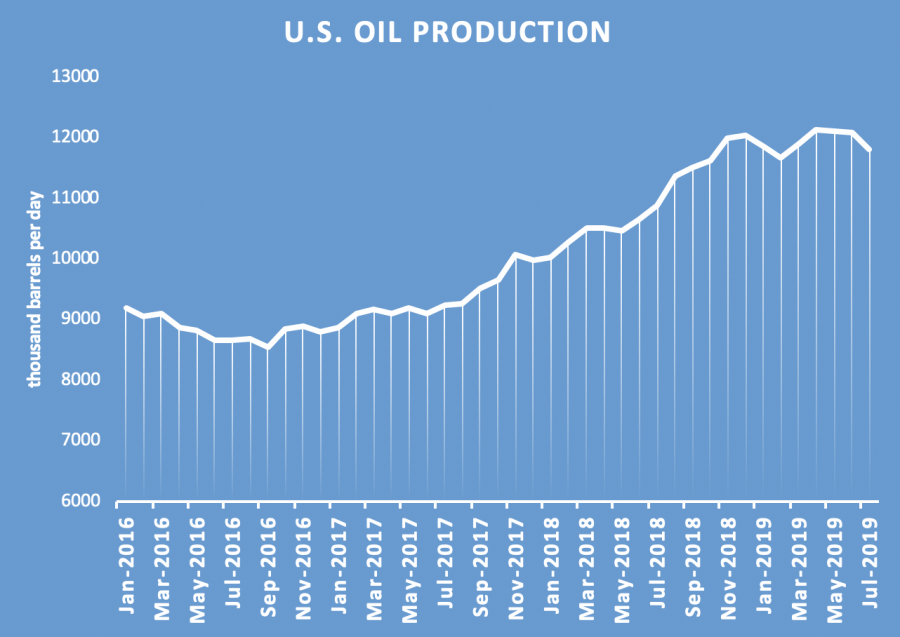 Because the Permian drives much of the growth and commands most of the attention, it is instructive to look at Texas. The latest EIA data shows that Texas boosted production by 40,000 bpd in July from a month earlier, which is not trivial, but down sharply from the triple-digit monthly gains routinely posted throughout much of 2017 and 2018. Year-to-date, Texas has only added 125,000 bpd, a rather modest figure. The state added 474,000 bpd in the first seven months of 2018 by comparison.

On a year-on-year basis, the figures look a little more impressive, but those too have slowed down. In July, U.S. production was up 915,000 bpd from a year earlier. But again, because that covered a month of hurricane outages, it might be useful to rewind to June. In that month, U.S. oil production stood at 12.082 mb/d, up 1.433 mb/d from a year earlier.

That’s impressive, but notably smaller than the 2.1 mb/d year-on-year increase seen between August 2017 and August 2018, the peak of year-on-year gains.

Moreover, those year-on-year figures are going to fall sharply going forward, as they will increasingly encompass a period of time in which production leveled off.

What are we to make of all of this? Over at Reuters, analyst John Kemp said that it now appears that the shale boom has come to an end. “The second U.S. shale oil boom (2017-2018) is ending for much the same reasons as the first (2012-2014): high prices encouraged over-production and global oil consumption growth cooled,” Kemp wrote.

He added that even the modest gains this year are a reflection of the period of higher prices seen late last year, due to the lag between price movements and actual production data. In other words, the slump in prices this year has yet to be fully felt.Related: China’s Renewable Boom Hits The Wall

For shale drillers, the problem is made worse by the fact that they are facing financial stressand the prospect of persistently low prices. The rig count has fallen sharply, down roughly 20 percent since last November. Drillers are cutting back, hoping to improve their cash flow position amid investor scrutiny.

But oil prices are not cooperating as the global economy continues to decelerate. “Front-month Brent averaged a seven-quarter low of USD 62.03/bbl in Q3, with a q/q fall of USD 6.44/bbl and a y/y fall of USD 13.81/bbl,” Standard Chartered wrote in a note. Low oil prices has created “a highly pessimistic mood within the US oil and gas industry,” the bank said.

The outlook for oil prices over the next few quarters is not exactly encouraging if you are in the oil business. A Wall Street Journal survey of 13 major investment banks estimates Brent crude will average $58.24 per barrel in the fourth quarter, almost unchanged from last month’s survey despite the September 14 Abqaiq attack.