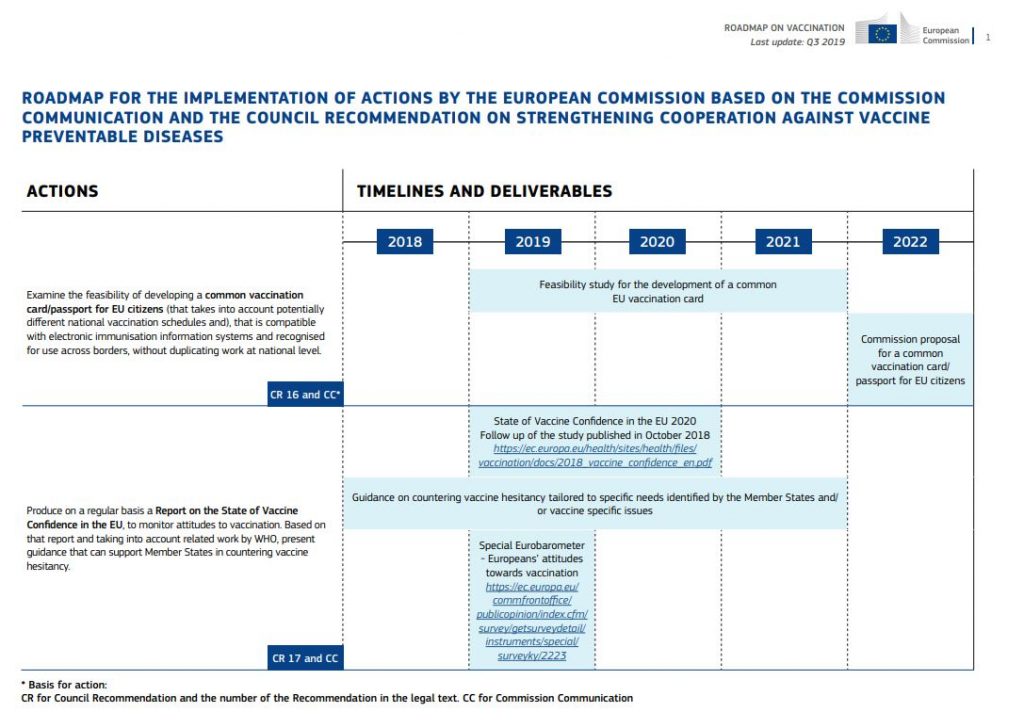 Europe was already planning for a Vaccine ID Passport from the 3rd quarter of 2019. The real question is what is a vaccine. Gates has been funding a vaccine that is totally different. Instead of introducing a sample of a disease, he has been funding a vaccine that is in part nanobots that target to change and alter your DNA to prevent disease. This is already being met with approval and is highly questionable as to what are the long-term effects of changing someone’s DNA.

Gates has been behind the movement in the EU to compel Europeans to be vaccinated. There was even a September 12, 2019, global vaccination summit that was jointly sponsored bt the EC and Gates who controlled the World Health Organization (WHO). Roberto Burioni, a virologist at Vita-Salute San Raffaele University in Milan, Italy, became a celebrity battling against vaccine skeptics by simply stating: “The Earth is round, gasoline is flammable, and vaccines are safe and effective,” he said. “All the rest are dangerous lies.”

One of the reasons some believe that the death rate in Italy from COVID-19 was higher than most other countries was because they were the target for a Gates’ vaccine project sponsored by the WHO. The 2016 Lifetime Immunization Schedule was approved by the Italian scientific societies claiming it was a new paradigm to promote vaccination at all ages. There was a partnership of four national Medical Scientific Societies active in Italy in producing scientific advice on vaccines and vaccination influenced by Gates. These were:

The “Lifetime Immunization Schedule” was introduced for the first time in Italy which allowed its people to be experiments for Gates and the WHO. The Italian National Prevention Plan was approved by the Italian Ministry of Health in February 2017. The serious question that has not been answered is what has been the connection between the excessive death rate in Italy in relation to this vaccination for “all ages,” which took place as an experiment supported by the WHO and Bill Gates.

There are serious questions about our politicians. Are they being paid-off to allow Gates to experiment on the world population? The correlation between Italy and the only country to allow a Gates experimentation needs to be addressed. The problem we really have is no politicians will allow an investigation that exposes their own corruption or bad decisions.