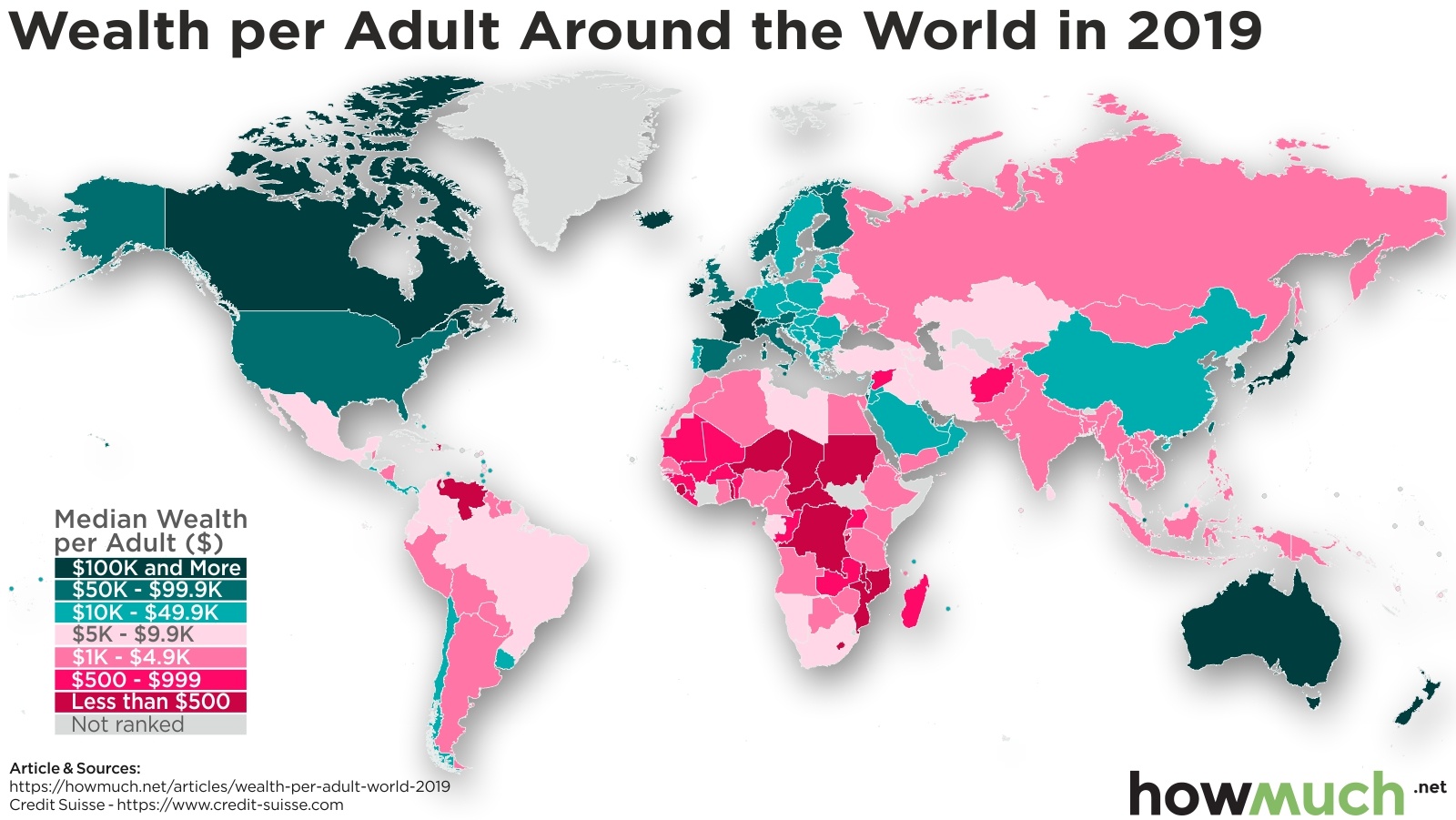 The best way to compare levels of wealth around the world is by looking at median figures. A median number simply indicates that 50% of all people have more than that much money, and 50% have less. Our map visualizes the median total net worth per adult living in each country according to a new report from Credit Suisse. You can read the details of Credit Suisse’s methodology for yourself, including how the authors estimated the value of nonfinancial wealth. The result is a fascinating and nuanced portrait of global and regional wealth inequality. 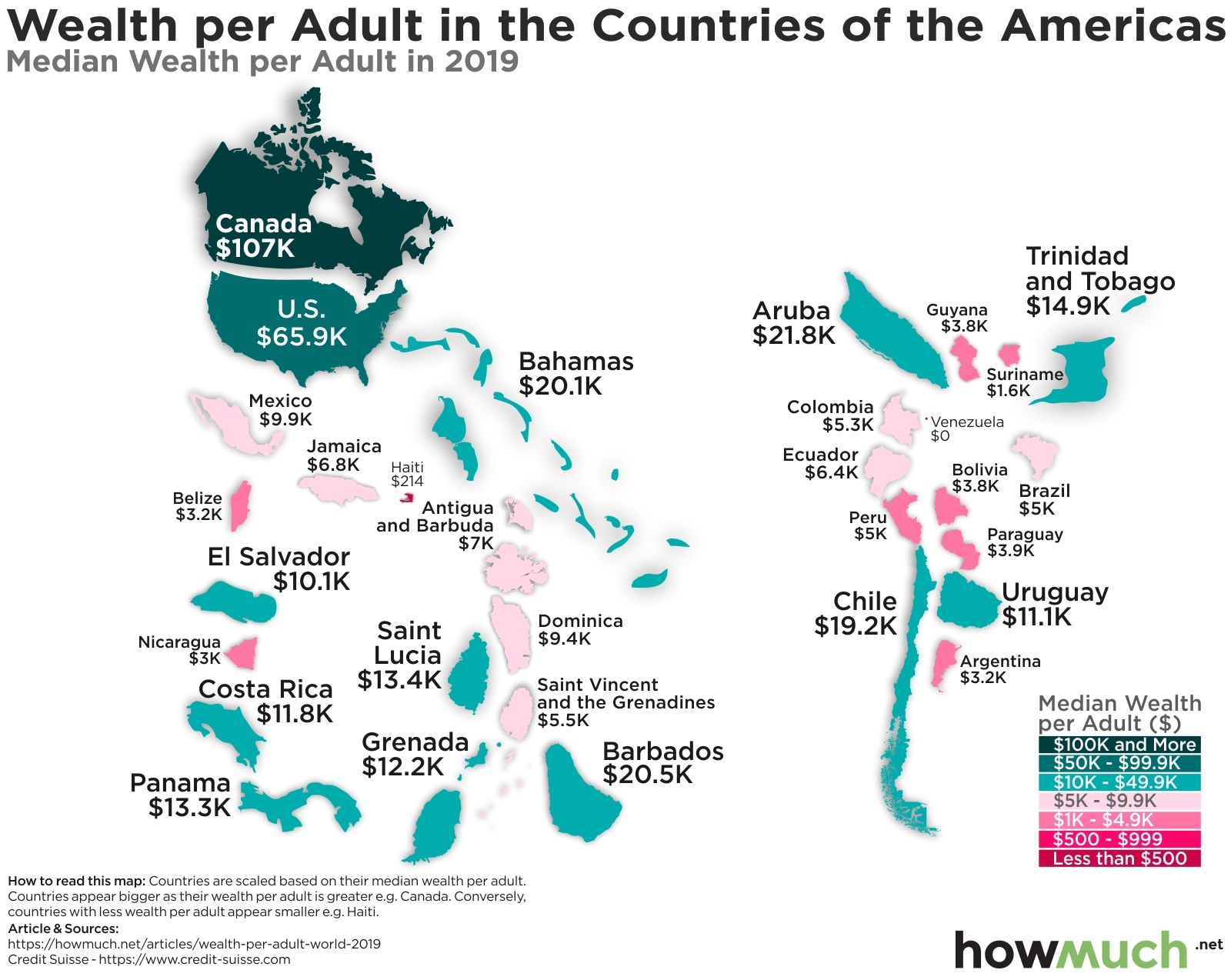 Top 3 Countries in the Americas by Median Wealth per Adult

It’s no surprise that Canada ($107K) and the U.S. ($65.9K) are by far the wealthiest in the Western Hemisphere. One place that’s become measurably worse over the last year is Venezuela. The Venezuelan economy has almost entirely collapsed, destroying an untold amount of wealth. The country essentially has a worthless currency, and half of all the country’s transactions now take place in American dollars. People are now buying gasoline with cigarettes. It’s hard to see how things could get much worse. 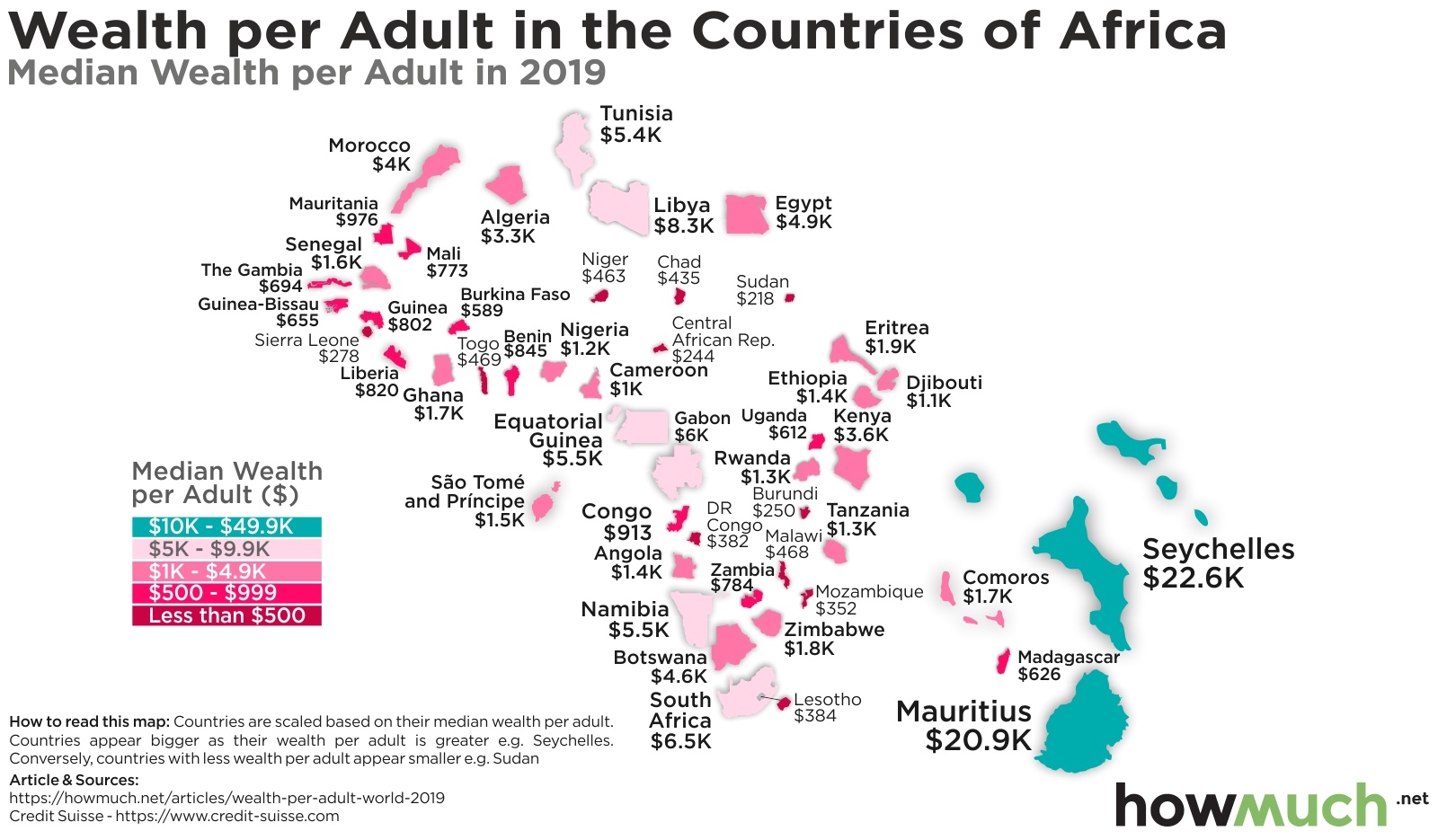 Top 3 Countries in Africa by Median Wealth per Adult

Our map demonstrates how poor Africa is. There isn’t a single country on the continent where median wealth exceeds $10K. The only standout countries are island nations in the middle of Indian Ocean, where rich tourists and celebrities vacation. 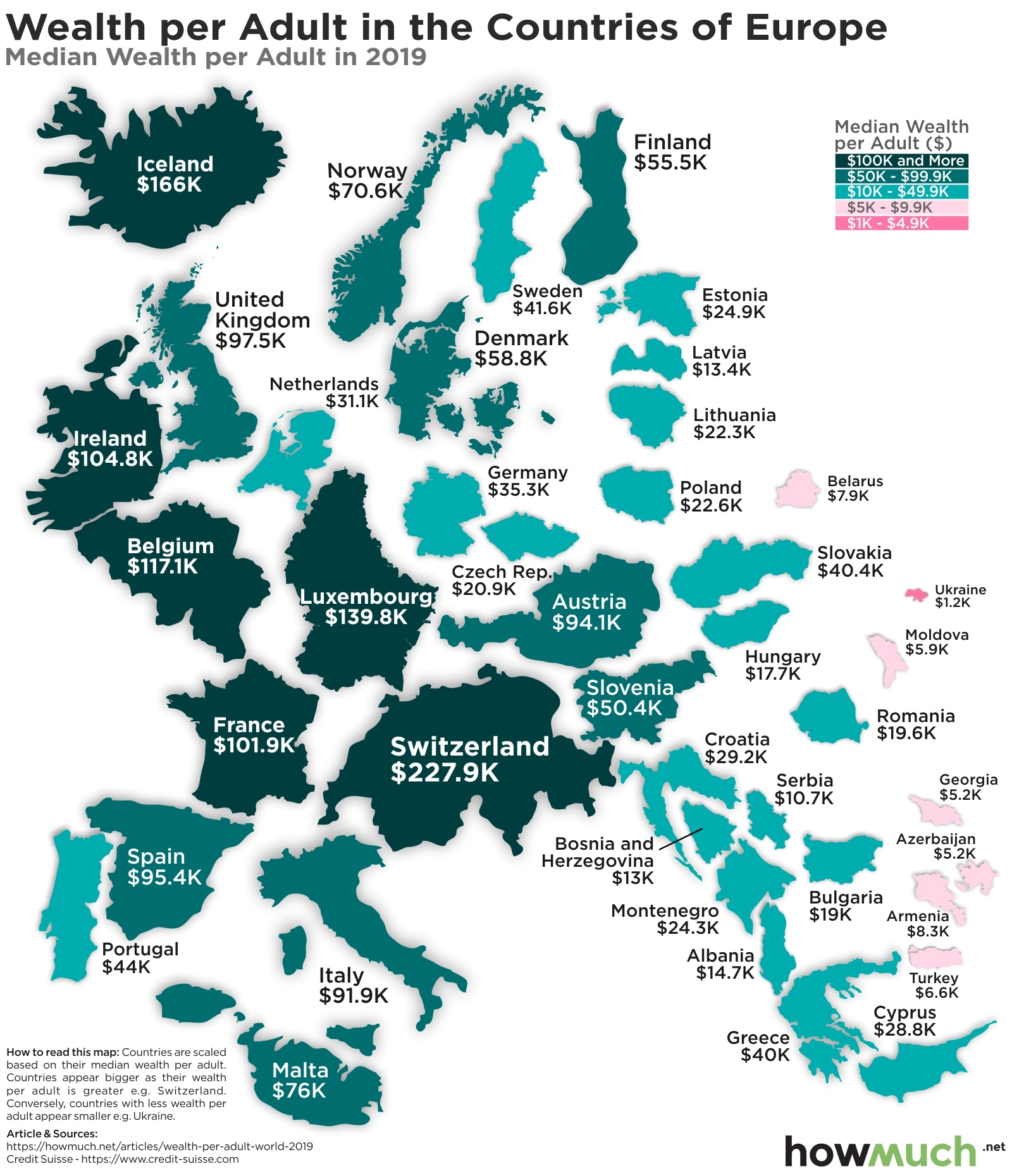 Top 3 Countries in Europe by Median Wealth per Adult

Western European countries are clearly very wealthy, led by the Swiss. It’s an open question to what extent Swiss banking is responsible for increasing that country’s overall median wealth figures. Nevertheless, the contrast between West and East is stark. Ukraine, for example, only has $1.2K per adult, on par with many countries in Africa. 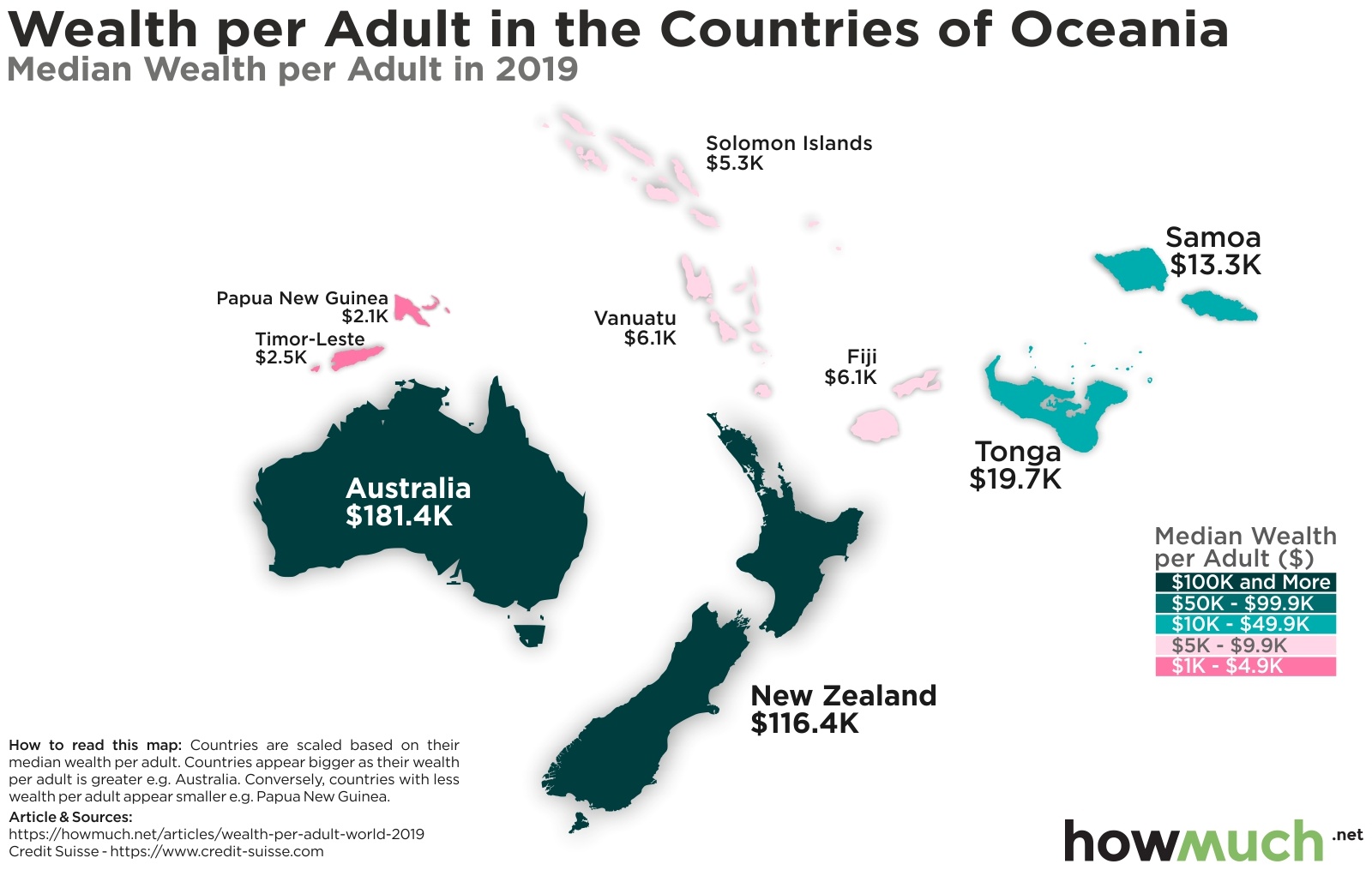 Top 3 Countries in Oceania by Median Wealth per Adult

Australia and New Zealand are by far the wealthiest countries in Oceania. They are surrounded by islands with comparatively little wealth, like Fiji ($6.1K) and Vanuatu ($6.1K).

Top 3 Countries in Oceania by Median Wealth per Adult

Some countries in the Middle East are relatively wealthy given their abundance of oil, like Kuwait ($46.2K). Places connected to the global economy are the clear standouts in Asia, such as Hong Kong, Japan and Singapore. It will be very interesting to see where Hong Kong is on global wealth rankings next year. The recent protests have plunged the city into a recession.

It’s always helpful to balance these types of maps with a couple different ways of breaking down the cost of living. For example, how much does a pint of beer cost around the world? After all, it’s one thing to be wealthy on paper, but quite another to afford the types of things that make up a good life.

Given all this, where do you think the best place to live in the world is? Let us know in the comments.