There’s a lot of power in being first. And when it comes to Initial Public Offerings, or IPOs, it pays to be among one of the earliest investors.

But we wanted to understand how much it would pay, so we ran an experiment. Imagine you could go back in time and invest $100 into a handful of great companies when they initially went public. Imagine you could do the same for bitcoin. What would your investments be worth today? 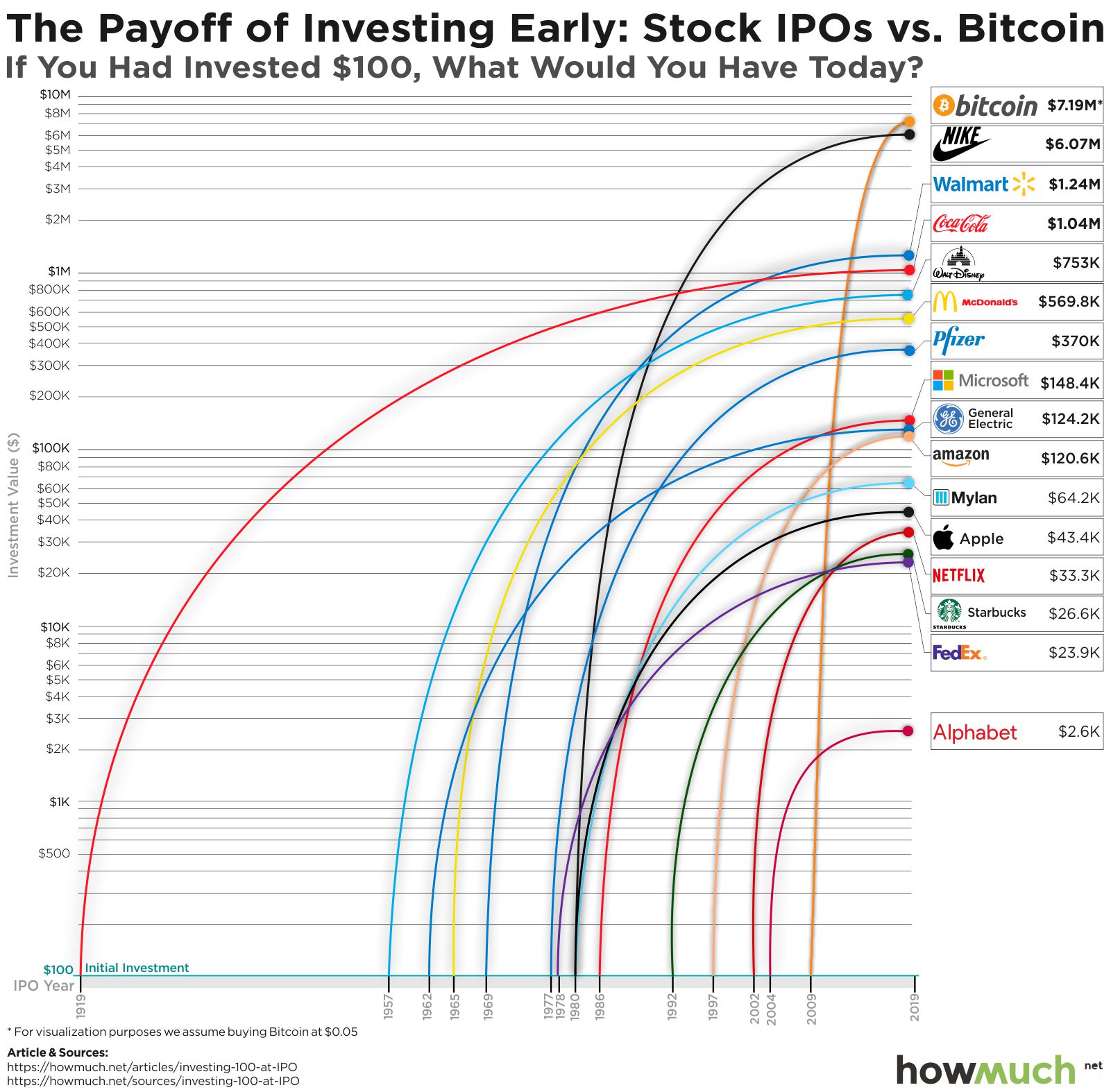 Let’s start with how we crunched the numbers. We wanted to compare apples to apples, so we made a couple key assumptions. First, we assumed our hypothetical investment of $100 at each IPO would stay with the underlying asset for the long term, but any dividends would be taken out as cash and not reinvested. This evens the playing field between stocks and bitcoin. Then, we determined the present-day value of the investment through the ups and downs of stock splits, mergers and acquisitions. You can read more about our sources and methodology here. In short, you put $100 in at the IPO, and let it ride.

The clear winner is bitcoin. If you had put a crisp Benjamin into bitcoin at its initial price of $0.05 on January 3, 2009, you would’ve gotten 2,000 bitcoins, or an astonishing $7,186,980 as of February 15, 2019. And here’s the thing. That’s after the great crypto “crash” of 2018. Just imagine how different this visual would be had we created it 12 or 14 months ago. Bitcoin is still in first place today, but the value was in another stratosphere only a short while ago.

There’s another story hiding underneath bitcoin’s impressive return, and that’s the enduring value of companies like Coca Cola, Walt Disney and McDonalds. Even GE, a company that’s suffered its share of setbacks in the last several months, still looks like a great IPO pick after all these years. And for all the hype surround tech stocks, $100 invested into Google (Alphabet) would be worth $2,632 today. That’s a great return even if it looks small compared to bitcoin.

So it pays to be among the earliest investors, but how do you know what to invest in? All these companies initially started as one among many competitors, and bitcoin is now only one among several different cryptocurrencies. Some IPOs skyrocket in value only to plummet in the following years. Other IPOs take a long time to get off the ground. We don’t know how to pick the winners, but we’re confident if you bought bitcoin early on, you’re still happy with your return today.