COVID-19 continues to inflict massive damage on the global economy, but how are some of the most recognizable companies doing? We crunched the numbers for a handful of well known corporations from around the world to visualize just how bad the carnage has been in some corners of the corporate world for the first half of 2020. 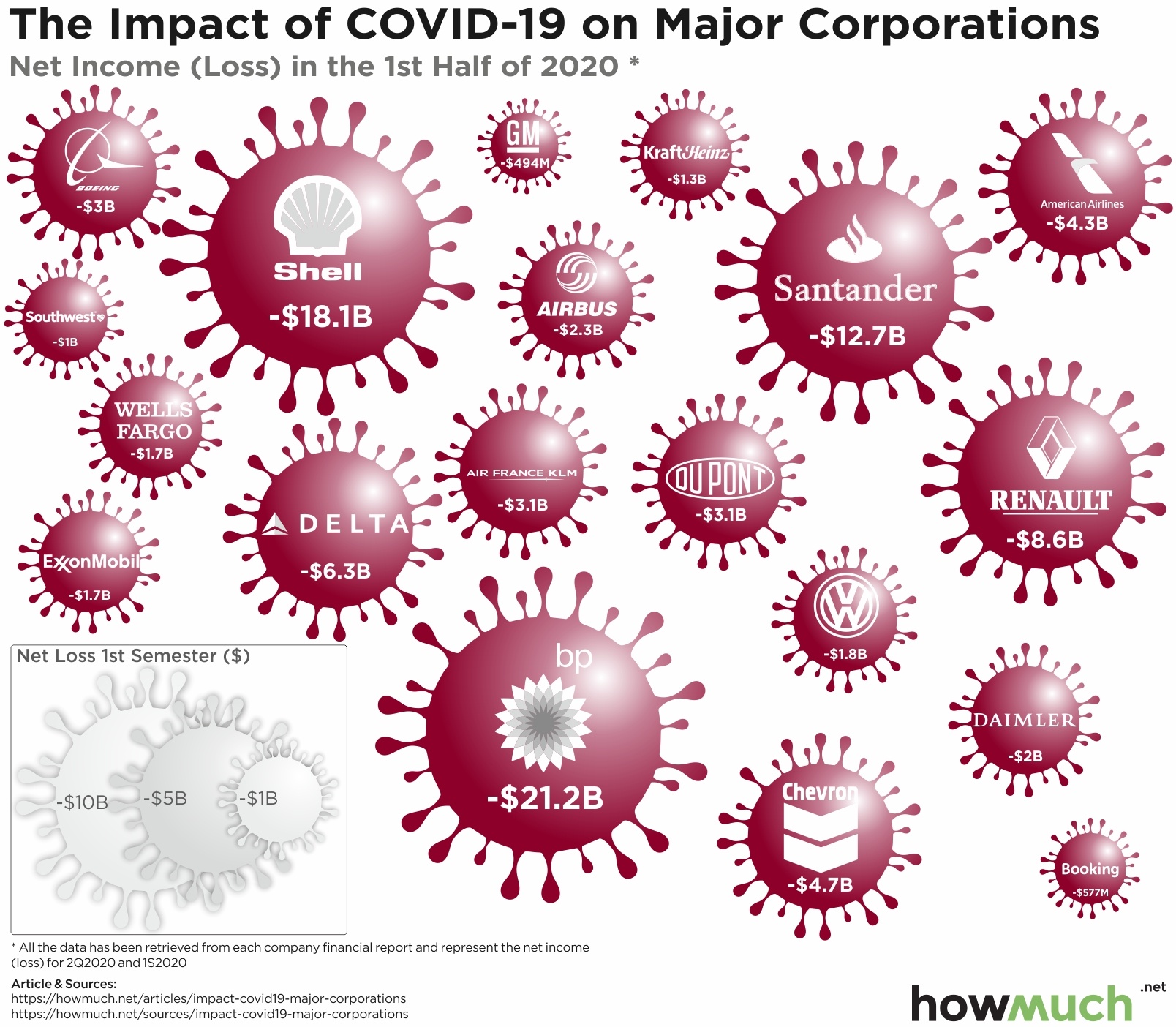 We sourced the data for our visualization directly from each company’s separate quarterly earnings report for 2Q2020. We plotted the total net income lost in the first half of the year together with each company’s logo and a correspondingly sized representation of the coronavirus. The carnage to corporate balance sheets is enormous.

Top 10 Companies With the Worst Losses in Our Visual

Our visualization illustrates in stark detail how the coronavirus pandemic is inflicting significant damage on the travel industry. First and foremost, oil companies saw a total collapse in oil demand. Back in April 2020, there was so much excess oil on the market and not enough demand that prices actually turned negative. That means there was so much oil, and nowhere near enough people to buy it, that producers would literally pay anyone to take it off their hands. This new reality directly impacted the bottom lines at companies like BP (-$21.2B), Shell (-$18.1B) and Chevron (-$4.7B).

Oil companies weren’t the only ones to suffer an epic collapse in consumer demand with the onset of the pandemic. The TSA counts how many people pass through its checkpoints at airports around the country. During the 2Q2020, more than 90% of the market simply disappeared, directly hammering the profits for airlines. Delta lost $6.3B, American Airlines saw a loss of $4.3B, and Air France-KLM likewise suffered a decline of $3.1B. Even Warren Buffett decided to dump all of his airline stocks. The same economic damage is visible in other parts of the economy, like auto manufacturers, banks and consumer goods, but it’s nowhere near as bad as in the travel industry.

But also spare a thought for Boeing. The company was already experiencing significant problems before the coronavirus suckerpunched global travel. Boeing was forced to ground its marquee airplane, the Max 737, in March 2019 due to two horrific fatal crashes. Airlines have since canceled over 800 orders for the plane, slamming the company’s profits and resulting in a combined loss of -$3B for the first half of the year.

We should also add that there is a significant disconnect between the real economy, as it’s experienced by the tens of millions of unemployed Americans, and the stock market. How can it be true that the US is currently experiencing record unemployment rates of 10.2%, and yet the S&P 500 is actually up 3.19% year-to-date as of this writing? Part of the explanation is that some major companies, like Amazon, have benefited from the coronavirus and now represent a larger share of the economy while all the companies in our visual suffer. Another reason is that stock prices are inherently future oriented, and count us among those who hope for a brighter future ahead.