Tesla has repeatedly defied its naysayers throughout its history. Lots of people are still betting against the company, and its infamous CEO Elon Musk has had to prove his worth over and over again en route to captaining the most valuable carmaker in the world. But how did Tesla get here? 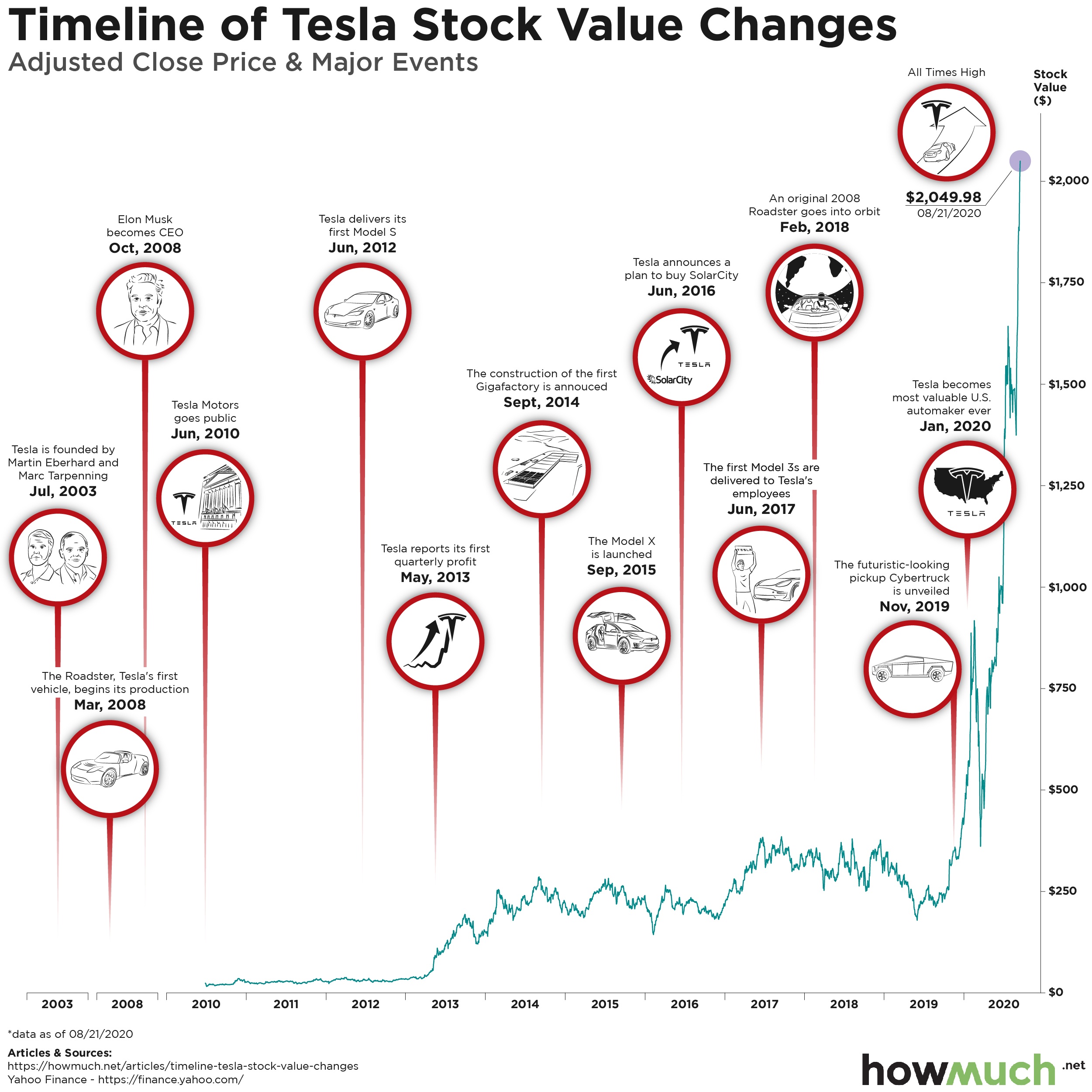 We created our visualization by first plotting the closing price for a share of Tesla stock since its IPO in June 2010 according to Yahoo! Finance. Then, we researched all of the major company events, overlaying the milestones and announcements with the share price. The result is an intuitive snapshot of Tesla’s history, tracing the company’s trajectory as an eccentric laughing stock all the way to becoming the most valuable carmaker in the world.

Originally founded in July 2003, Tesla didn’t go public until seven years later in 2010. The stock was nothing to write home about for the first few years, moving around a bit from $20 to $40 until about May 2013, when the company turned its first profit. It is difficult to understate how important this moment was in the company’s history. It proved that manufacturing luxury electric vehicles could be a viable long term business. The company continued to grow and bring new models to the market, like the Model X in September 2015 and the Model 3 in June 2017. All the while Elon Musk, the company’s infamous CEO, engaged in his usual theatrics, like launching a Roadster into orbit in 2018.

More recently, Tesla’s performance has been nothing short of astonishing. Like the broader US economy, Tesla started the year on a hig note. In fact, Tesla surpassed Ford to become the most valuable US carmaker in January, despite its relatively low total vehicle manufacturing numbers.

The coronavirus pandemic scrambled the global economy and sent the world into mandatory lockdowns. Millions of people lost their jobs, and suddenly it looked like hardly anyone would be buying a new car,  much less a luxury electric brand. Tesla hit bottom on March 18, when it closed at $361.22. Ever since then Tesla has been on an eye-popping comeback, climbing way past its previous all time high to $2,049.98 as of this writing. In fact, this summer the company surpassed Toyota to become the most valuable carmaker in the entire world.

So why is Tesla suddenly riding so high? For starters, a lot of people have been betting against Tesla for a long time, and they’re cashing out their short selling positions, stoking artificial demand. The latest high includes the market’s optimistic reaction to the news of Tesla’s five-to-one stock split coming August 28, meaning everybody who owns one share of Tesla will have five shares when the markets open August 31. But that also means the price of the stock will be adjusted downward to reflect the diluted market. So why would prices inherently jump 50% just because a company is splitting its stock? We aren’t sure why, but we wonder if Elon still thinks Tesla’s share price is too high.

Do you think the share price of Tesla will continue its meteoric rise? Or will it tumble back to earth? Let us know in the comments.