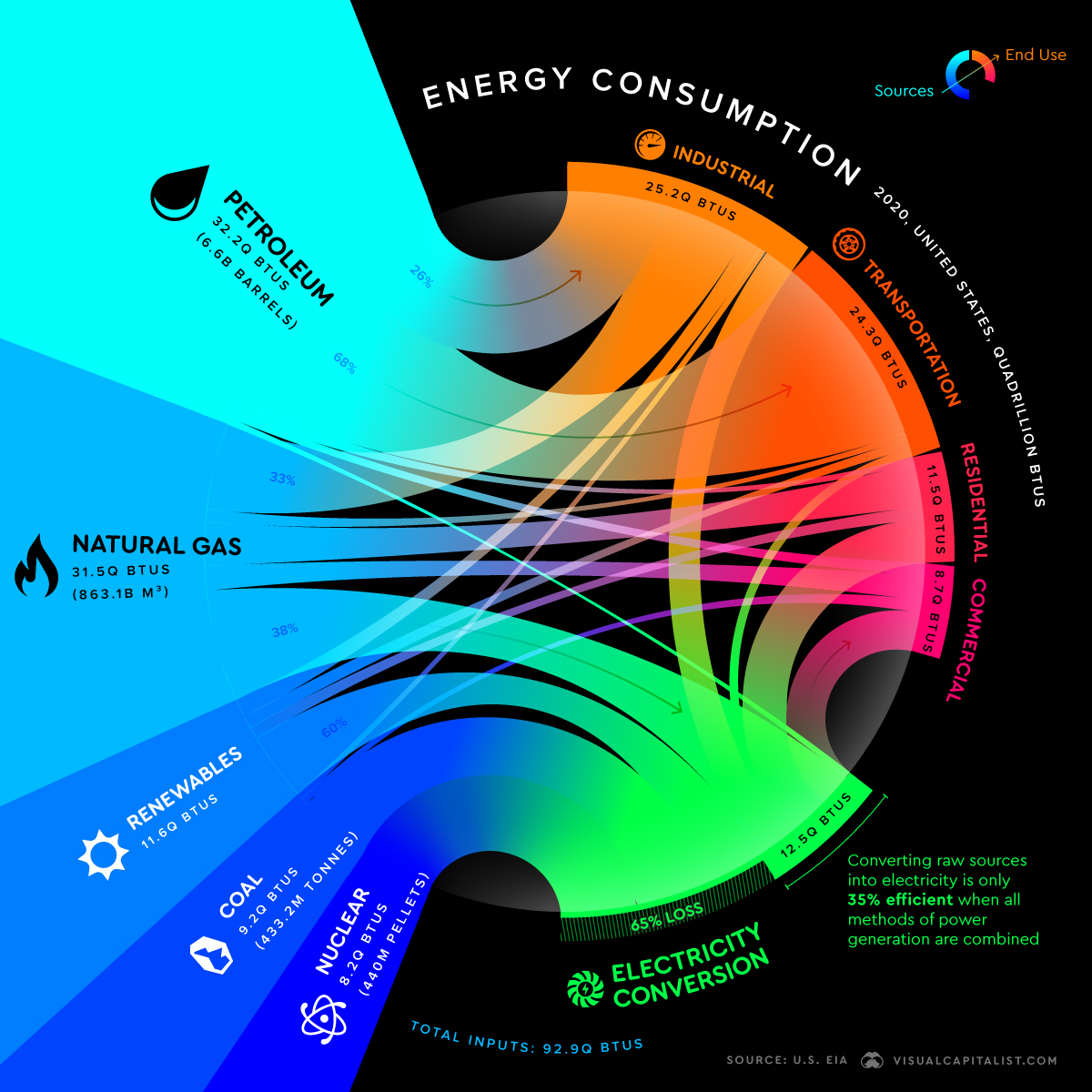 The United States relies on a complex mix of energy sources to fuel the country’s various end-sectors’ energy consumption.

While this energy mix is still dominated by fossil fuels, there are signs of a steady shift to renewable energy over the past decade.

This radial Sankey diagram using data from the EIA (Energy Information Administration) breaks down U.S. energy consumption in 2020, showing us how much each sector relies on various energy sources.

The Balance of Energy Production and Consumption

In 2019 and now in 2020, America’s domestic energy production has actually been greater than its consumption—a development that hasn’t taken place since 1957.

The energy amounts are equalized and measured in quadrillion BTUs (British thermal units), also known as quads. A quad is a huge amount of energy, equivalent to 183 million barrels of petroleum or 36 million tonnes of coal.

So how is America’s overall energy production and consumption split between energy sources?

America’s new margin of energy production over consumption has resulted in the country being a net total energy exporter again, providing some flexibility as the country continues its transition towards more sustainable and renewable energy sources.

There are signs of change as consumption of the dirtiest fossil fuel, coal, has declined more than 58% since its peak in 2005. Coinciding with this declining coal dependence, consumption from renewable energy has increased for six years straight, setting record highs again in 2020.

However, fossil fuels still make up 79% of U.S. energy consumption, with renewables and nuclear accounting for the remaining 21%. The table below looks at the share of specific renewable energy sources in 2020.

The Nuclear Necessity for a Zero-Emission Energy Transition

It’s not all up to renewable energy sources to clean up America’s energy mix, as nuclear power will play a vital role in reducing carbon emissions. Technically not a renewable energy source due to uranium’s finite nature, nuclear energy is still a zero-emission energy that has provided around 20% of total annual U.S. electricity since 1990.

Support for nuclear power has been growing slowly, and last year was the first which saw nuclear electricity generation overtake coal. However, this might not last as three nuclear plants including New York’s Indian Point nuclear plant are set to be decommissioned in 2021, with a fourth plant scheduled for retirement in 2022.

It’s worth noting that while other countries might have a higher share of nuclear energy in their total electricity generation, the U.S. still has the largest nuclear generation capacity worldwide and has generated more nuclear electricity than any other country in the world.

Unfortunately, electricity conversion is a fairly inefficient process, with around 65% of the energy lost in the conversion, transmission, and distribution of electricity.

This necessary but wasteful step allows for the storage of energy in electrical form, ensuring that it can be distributed properly. Working towards more efficient methods of energy to electricity conversion is an often forgotten aspect of reducing wasted energy.

Despite the dip in 2020, both energy production and consumption in the U.S. are forecasted to continue rising. As Biden aims to reduce greenhouse gas emissions by 50% by 2030 (from 2005 emission levels), U.S. energy consumption will inevitably continue to shift away from fossil fuels and towards renewable and nuclear energy.