President Trump has repeatedly told Apple to manufacture iPhones in the U.S. instead of China. Even with the coronavirus scrambling international supply chains, Apple doesn’t appear ready to shift its manufacturing from China to the U.S. anytime soon. Part of the reason why is that China dominates the world export market for computer devices, as our new map makes clear. 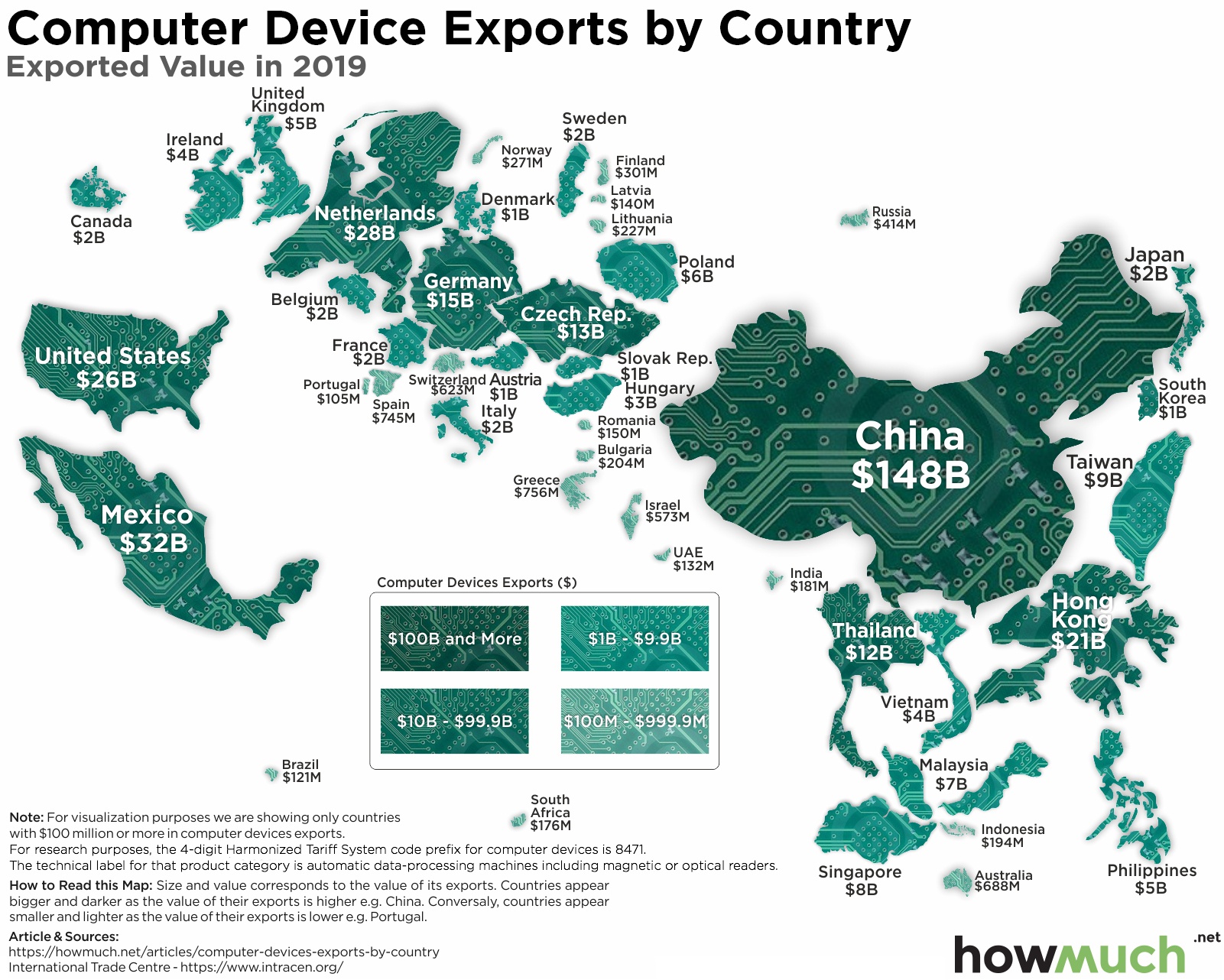 We got the data for our visualization from the International Trade Centre’s list of exports for 2019. For research purposes, the 4-digit Harmonized Tariff System code prefix for computer devices is 8471. The technical label for that product category is automatic data-processing machines including magnetic or optical readers. To make our map easy to read, we excluded any countries with less than $100M in annual computer device exports. We first changed the size of each country in proportion to their export market, and then color-coded based on level. The result is a fascinating snapshot of the global export market for computer devices right before the coronavirus pandemic.

Asia, Europe and North America clearly dominate the export market for computer devices. South America, Africa and the Middle East are almost entirely missing from the visualization. Although we exclude countries with less than $100M in annual exports, the absence of entire countries illustrates the top-heavy nature of the computer and electronic device market. Brazil ($121M) and South Africa ($176M) are tiny compared to other countries.

And China is by far the world’s leader in manufacturing computers. At $148B, the Chinese control over 40% of the entire market. Lots of different companies make computers and smartphones, and many source their microchips from China, including Apple. And China’s figure doesn’t include separate totals from other Asian manufacturing powerhouses like Hong Kong ($21B) or Taiwan ($9B). In fact, our visualization makes it clear just how much the world relies on Asia to build and export its computers and smartphones.

And yet there’s a decent industry of computer exports in Europe as well as North America. Mexico boasts the second largest overall share of exports at $32B or 8.7%. Even the U.S. generates roughly $26B in annual international sales, not counting devices that are manufactured and bought inside American borders. The Netherlands ($28B), Germany ($15B) and the Czech Republic ($13B) also deserve special mention for their sizable device export industries.

How do you think the coronavirus will change the international export market for computers and devices? Will China maintain its dominance in the years ahead? Let us know in the comments.