It’s no secret the US economy is powered by cities. The coronavirus forced several major metro areas into lockdowns, halting all nonessential in-person activities and sending unemployment to historic highs. With many states now reconsidering lockdowns, we thought it would be time to measure just how important American cities are to the national GDP. 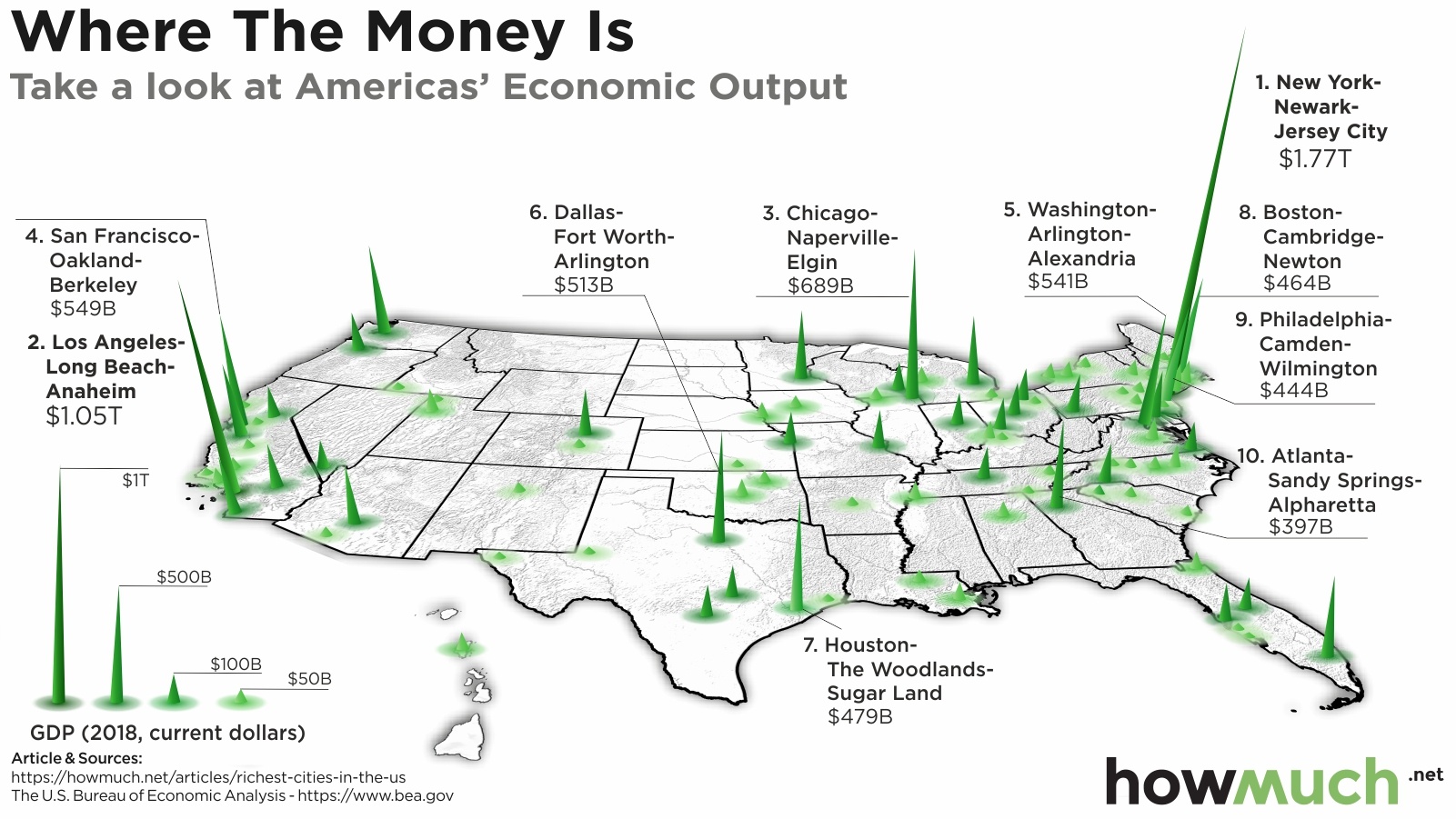 We got the data for our visual from the US Bureau of Economic Analysis for 2018, the latest year complete data were available. We created a 3D map where spikes indicate the gross domestic product (GDP) of each metro area, adjusted for inflation to 2020. The result is an intuitive snapshot of the geography of the American economy on the eve of the coronavirus disruptions.

Top 10 Richest Cities in the US – GDP by Metro Area

Our map reveals how the country’s economic output is concentrated in a select number of metro areas. New York stands head and shoulders above the rest, generating $1.77T in GDP each year, far ahead of second place Los Angeles at $1.05T. The greater New York area has a larger economy than all of Russia. A lot of these cities have larger economies than entire countries, as our previous analysis showed. The top 10 metros alone account for over 37% of the entire economic output for all American metros, or about $6.15T. That’s so big, if these cities left the US and formed their own country, it would have the third largest economy in the world.

To put our map in context, the top metro areas have seen their economies substantially grow over the last few years. New York’s GDP increased from $1.43T in 2016 (not adjusting for inflation) to approximately $1.77 (as of 2018 adjusted to 2020). Los Angeles similarly went from $885B to $1.05T. But San Francisco experienced the most growth relative to other cities, catapulting from seventh to fourth and going from $406B to $549B. That’s north of 35% growth in just a couple years.

One of the most interesting ways to think about this type of analysis is to consider how the coronavirus is scrambling and reordering the economy. Take San Francisco as an example. Filled with tech workers and software engineers, San Francisco has seen an exodus of people leaving the Bay Area as companies increasingly allow their employees to work remote, sometimes indefinitely. This has put downward pressure for the first time in recent history on real estate and rent prices, instead redistributing workers across the country where the costs of living are a lot lower. This should benefit smaller cities and potentially depress the GDP of major metros.

How do you think the coronavirus is going to change the economic map of the US? Let us know in the comments.