Ever wonder why a pint of beer costs a lot in some places, but next to nothing in other parts of the world? Part of the reason has to do with international currency exchange rates, but the biggest reason is that some places are just richer than others, as our latest visualization makes clear. 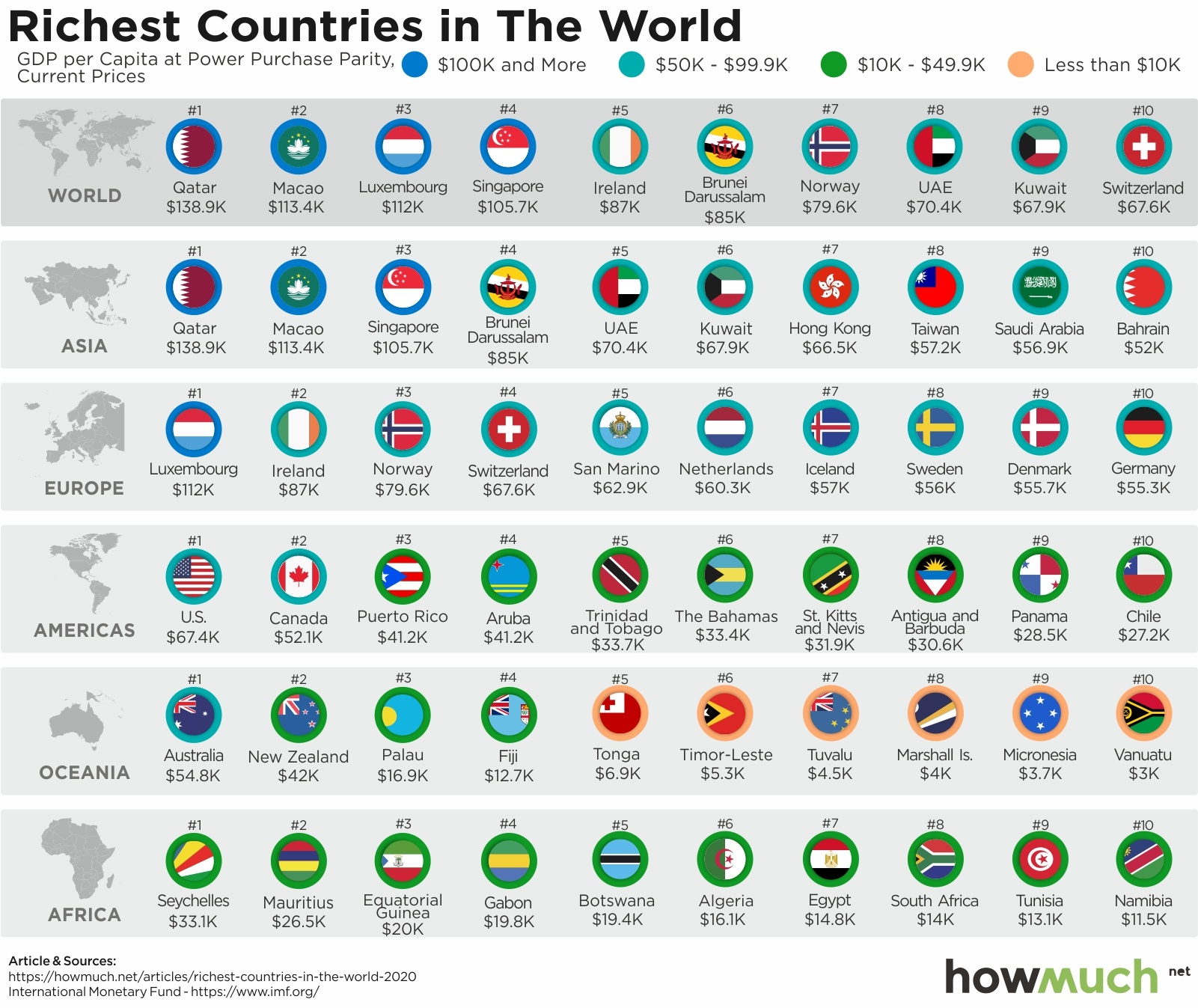 We found our data from the International Monetary Fund (IMF) for 2020. GDP per capita measures the economic output of a given country adjusted for its population size. This is a critical figure because highly populated countries, like China or India, can boast a high gross domestic product but still have hundreds of millions of impoverished citizens. The IMF further adjusts its figures to achieve purchasing power parity, which levels the playing field between international currencies. We combined each country’s flag with a color-coded ranking to demonstrate the have’s and have-not’s around the world.

The countries with the highest per capita GDP, adjusted for purchasing parity, all tend to be relatively small city-states with international fame in specific industries. The richest country in the world, Qatar ($138.9K), is a tiny Middle Eastern country with an absolutely massive amount of oil. Macao ($113.4K) is similarly a tiny autonomous region where Asia’s wealthy go to gamble. The other two countries to break $100K are likewise small countries, Luxembourg ($112K) and Singapore ($105.7K).

The US is noticeably absent from the list of top 10 countries. Whether or not you believe the US is the greatest country in the world, it is certainly not the wealthiest on a per capita basis. Coming in at just $67.4K, the US ranks 12th behind places like Switzerland ($67.6K) and Kuwait ($67.9K). That being said, the US is by far the richest in the Americas, easily outranking Canada ($52.1K). The rest of the hemisphere falls somewhere well below $50K.

The final insight from our visualization is just how poor Africa is compared to the rest of the world. Ranked dead last in almost every measure of wealth and living standards, there isn’t a single African country with more than $50K in per capita GDP. In fact, the two highest ranking African countries, the Seychelles ($33.1K) and Mauritius ($26.5K), aren’t even on the physical continent. The vast majority of Africa subsists on less than $10K in GDP per capita, several orders of magnitude less than any other developed economy in the world.

GDP per capita, adjusted for purchasing power, is a great way to compare the wealth between countries, however it doesn’t take into account wealth disparities inside each country. The US for example has a GDP per capita of $67.4K, but this doesn’t mean the average person contributes that much to the economy. As of 2018, the average wage in American was around $50,000 but the median was about $33,000. This suggests that a small number of wealthy people are driving up the overall figures.

How do you think the coronavirus will change the global economy? Let us know in the comments.