Who does the U.S. trade with the most? Our latest map breaks down one side of the equation, focusing on the top export partners for every state in the U.S. 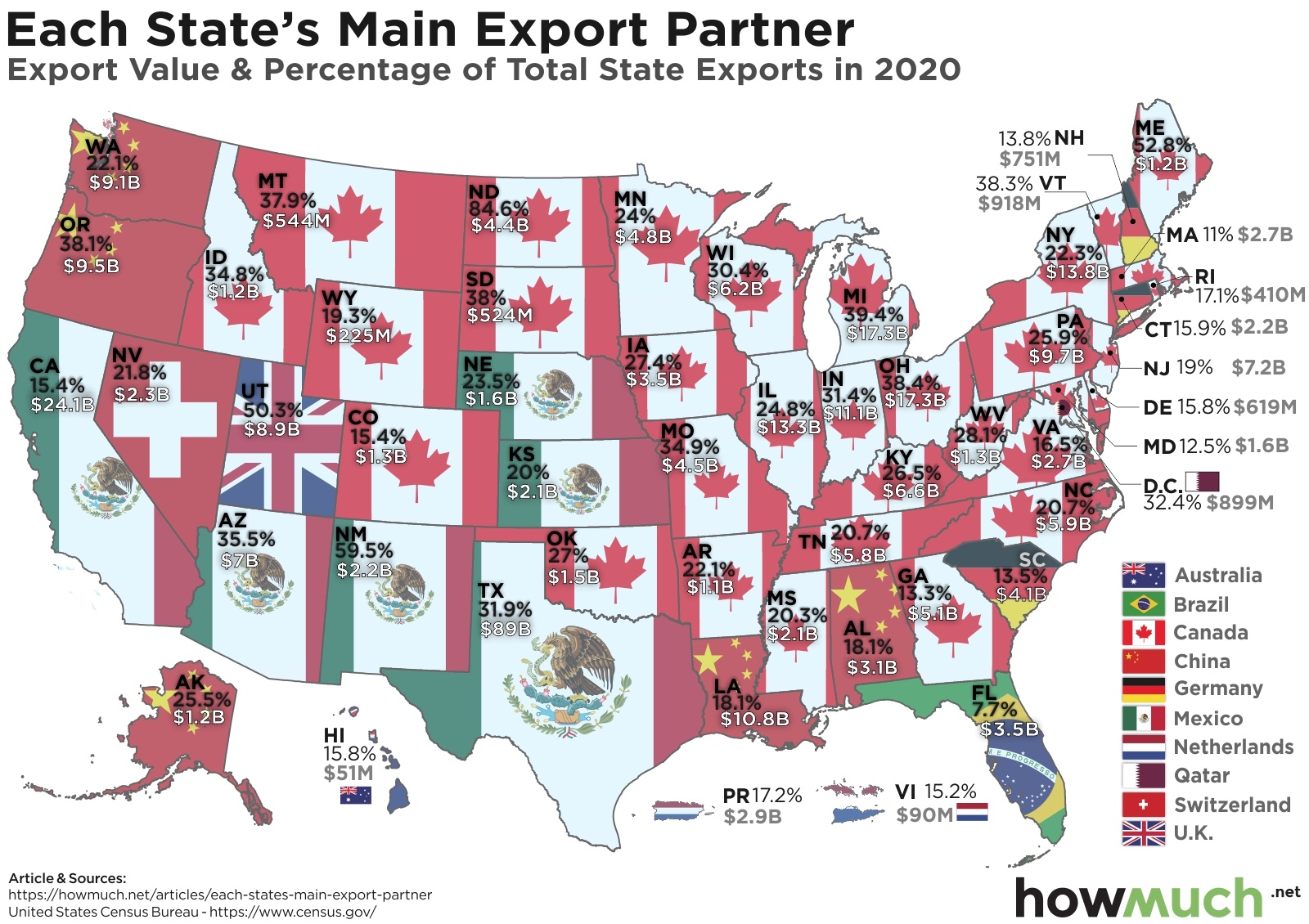 We gathered the data from 2020 for our map from the U.S. Census Bureau. We overlaid the flag of the country for each state’s top export partner, together with a percentage of total state exports and the overall dollar figure. The result is an intuitive and original take on the U.S. place in the global economy.

The U.S. has a lot of different trading partners scattered across the world, and a wide variety of different types of major exports. Our newest map highlights a different angle of all this economic activity, starting with the fact that Canada and Mexico are the largest trading partners for the vast majority of states. Canada alone is the top export partner for 33 states. Mexico claims top spot for an additional 6. The state most heavily dependent on Canadian exports is North Dakota, where 84.6% ($4.4B) of all exports head north. Likewise, New Mexico is the most dependent on Mexico, which accounts for 59.5%, ($2.2B). A lot of the local economies in these places hang in the balance of international trade agreements, which is why President Trump’s efforts to get rid of NAFTA, the North American Free Trade Agreement, were such a big deal.

If North Dakota and Mexico are the most heavily dependent on Canada and Mexico, Florida is at the opposite end of the spectrum. Florida is the only state to have Brazil as its top export partner, representing only 7.7% of the state’s exports ($3.5B). In fact, most states have somewhere between 20 to 30% of total exports going to a single trading partner. The average is 26.4% taking all the states together. All things considered, it is probably better to have a more diversified economy than one that is so dependent on a single trading partner.

Perhaps the most interesting thing our map demonstrates is how China is only the top export partner for 5 states, which includes Alaska. Our map’s focus on exports means that we are only looking at goods and services moving in one direction, from the U.S. to some other country. President Trump focused attention on how the U.S. is at a trade deficit with China, which soared during his time in office from $481B in 2016 to $916B in 2020. China and the U.S. have a dynamic relationship where each side sends the other many different types of goods. Our latest map is more evidence of how the relationship is imbalanced, where the U.S. imports a lot more from China than it exports.

Do you think it’s bad for a handful of states to be so dependent on single countries for their exports? Let us know in the comments.