Debt is a pressing issue in the United States, with total private and public debts hitting $70 trillion. At the federal level, growing budget deficits are contributing to this rise, while the private sector has a new growing source of debt: auto loans. 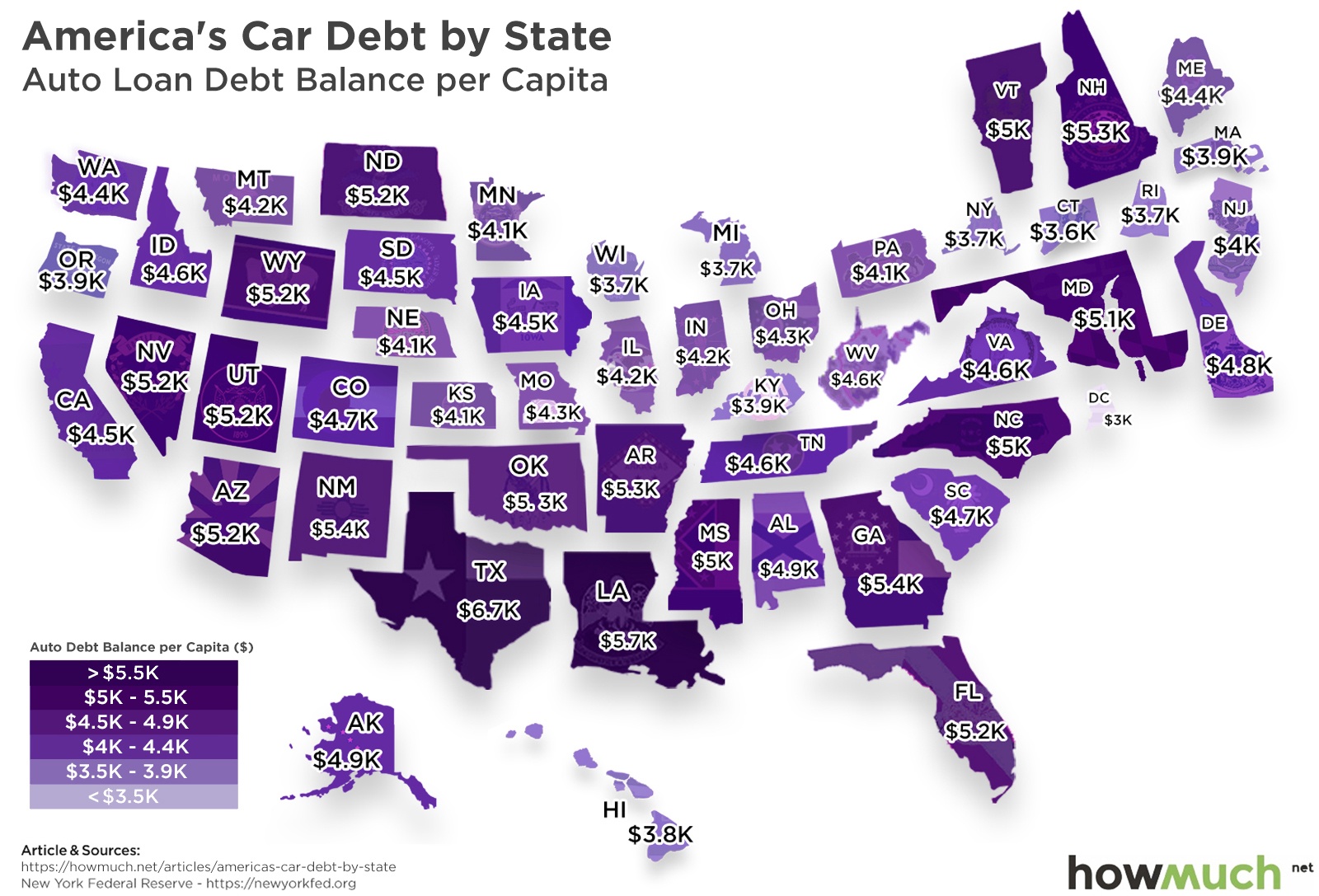 The data comes from the Federal Reserve’s New York branch, which puts out quarterly reports on household debt and credit for all 50 states. For this report, we will look at the most recent figures for auto debt balance per capita, as of Q4 2018, and what these numbers mean for the automotive industry. Our viz shows the average auto debt balance per capita for all 50 states. A darker shade of purple indicates a higher debt load.

At an average debt load per state of over $4,500, the nationwide auto debt load increased by over $9 billion in Q4 2018 to $1.3 trillion. This number, boosted by historically strong levels of new loans, also comes with a boost in serious delinquency rates to 2.4 percent. To learn more about how auto loans work, check out our Auto Loan Cost Guide.

Four of the five states with the highest per capita auto debt loads are in Southern states, and four of the five states with the lowest loads are in Northeastern states (including the District of Columbia in first place). Michigan, not known for its economic robustness, has the fifth-lowest auto debt load. Of course, the cost of the car loan alone is not the only driving expense: there are also factors like parking, fuel and insurance rates.

While a large-scale default crisis in the auto market has not occurred yet, high debt levels have contributed to an already shaky automotive industry. Auto sales were down in the first half of 2019, driven by higher interest rates and larger fleets of used vehicles. General Motors CEO Mary Barra, sensing industry shifts, said in a meeting with leaders of the United Auto Workers that “our collective future is at stake.”

One way to reduce debt burdens and sell more cars might be to cut the price of cars. That’s what Tesla is doing, by cutting the price of its best-selling Model 3 by $1,000 to $38,990. Unlike GM, Tesla does not have a union, which does reduce overhead, perhaps at the expense of worker well-being.

What do you think explains the rise in auto debt loads? How will this affect the automotive industry long-term? Share your thoughts in the comments.