Open enrollment for health insurance plans under the Affordable Care Act, also called Obamacare, will last until December 15, 2018. Unless you get insurance through your employer, you might be in for a surprise.

We crunched some numbers from a report by the Urban Institute, a nonprofit research organization dedicated to injecting facts into the public discourse. If you aren’t familiar with Obamacare, the first thing you should know is that health insurance plans fall into different tiers based on your total out-of-pocket expense for healthcare. Bronze plans are generally the cheapest because they provide minimal coverage, and at the other end of the spectrum, platinum plans provide rock-solid coverage but for a high price. Silver and gold plans fall between these two extremes. They offer a decent level of protection without such a comparably high cost. Our analysis focuses on monthly premiums for the lowest cost silver and gold plans for a 40-year-old healthy male. 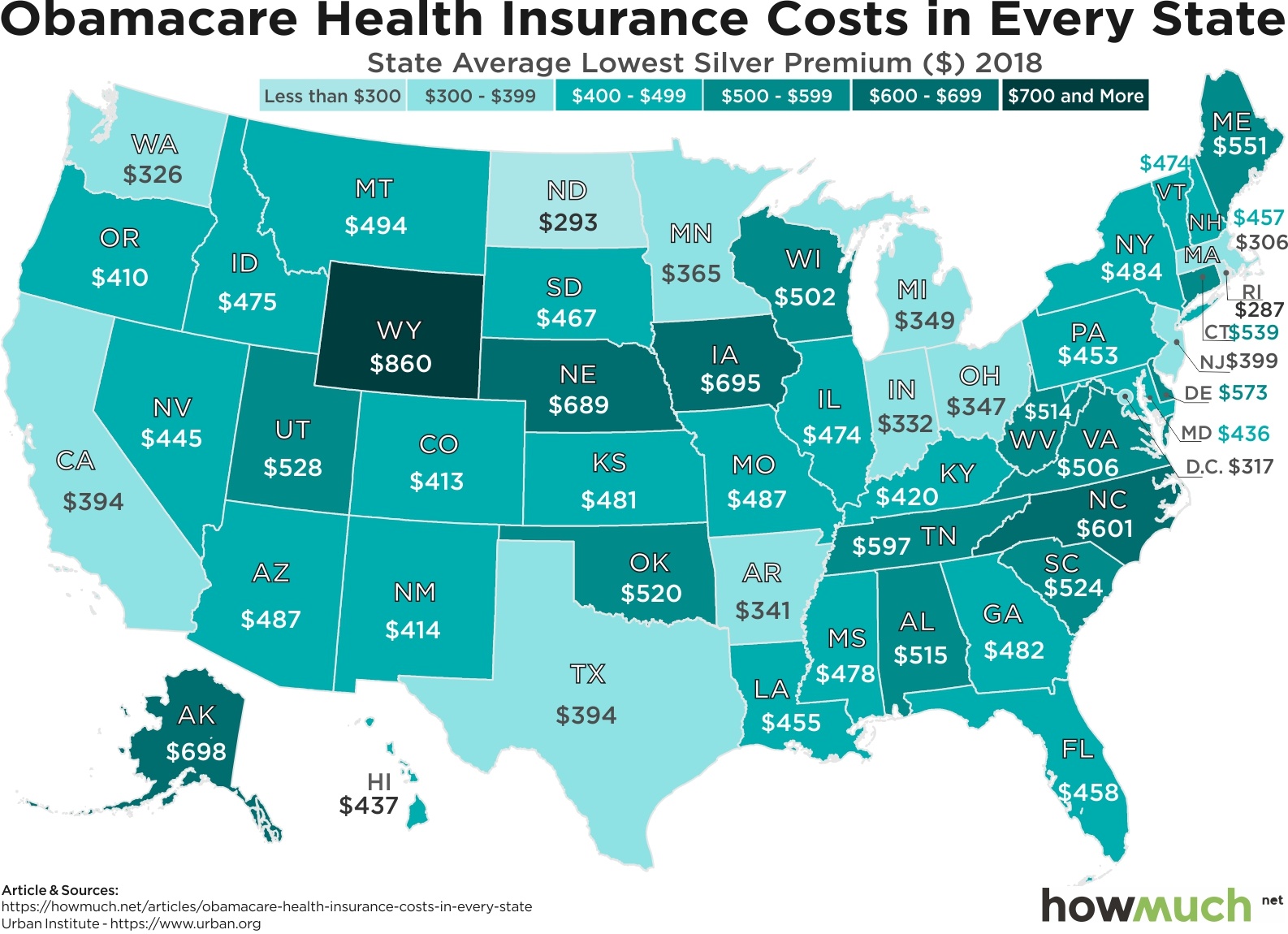 The cost of basic health insurance in the U.S. is indeed extremely expensive. Keep in mind these are all monthly figures, meaning some people are spending well over $6,000 just on insurance premiums. But here’s the kicker. State governments play a large role in subsidizing the markets (or not), leading to wide-ranging price disparities between comparable states in the same region. Consider for example Wyoming ($860), by far the most expensive state in the West. Moving directly south to Colorado and purchasing the same type of policy would save you $5,364 each year. Rhode Island takes first place as the most affordable state at only $287, but most states fall into the $400-$500 range.

See also  If you didn't know already....we live in a world where the scientists are scared shitless to call it like they see it!! 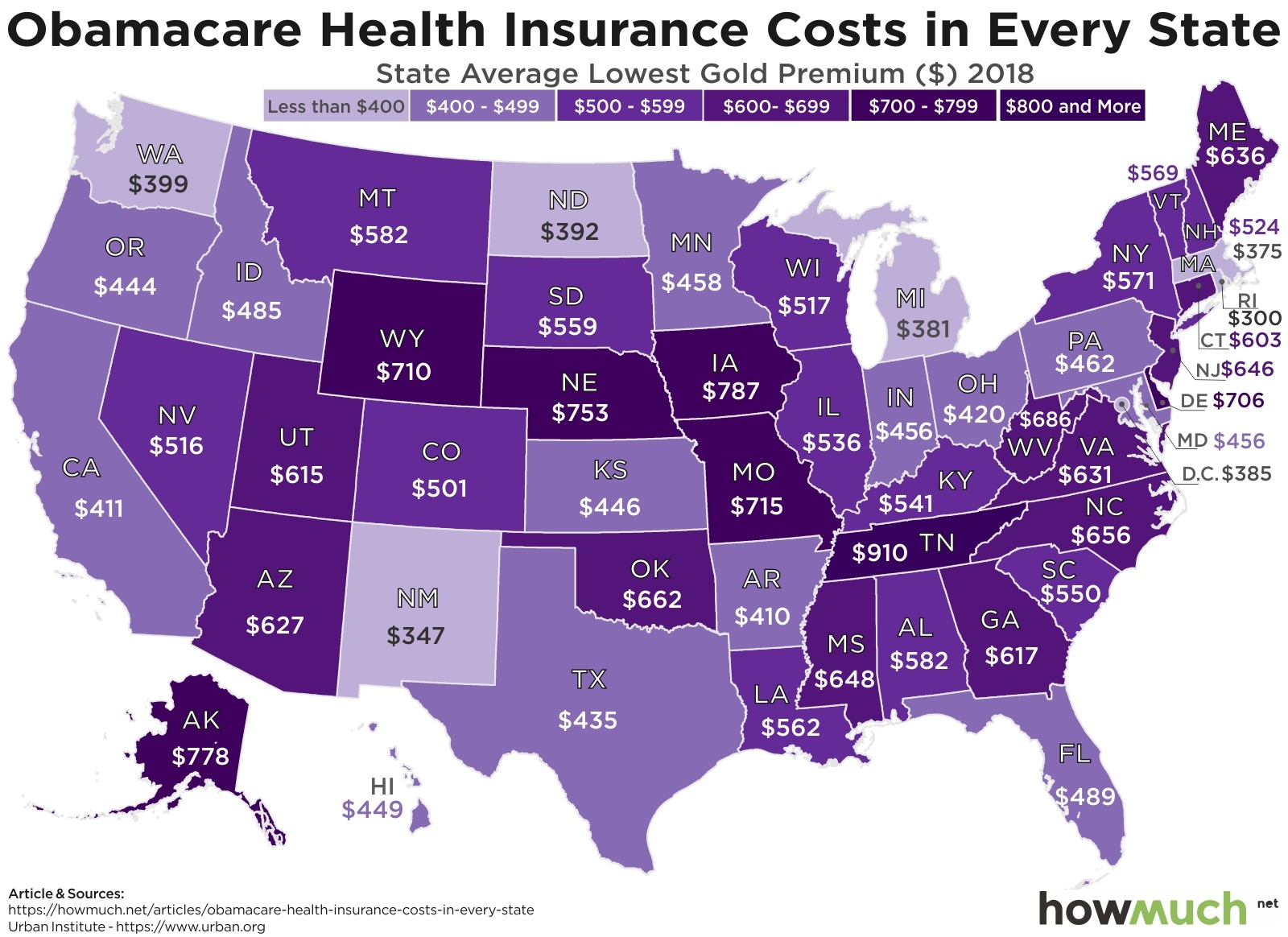 Prices for gold plans appear similarly scattered and geographically dependent. Some states have significantly higher costs compared to their silver plans, like Tennessee ($910), the most expensive in the country. And yet Rhode Island remains one of the cheapest marketplaces at only $300, an increase of just $13 from silver.

We should point out that some silver plans actually cost more than gold plans for a few states, like Wyoming ($860 for silver vs $710 for gold). There are some complicated reasons why, but part of the explanation has to do with how the government providespreferential tax subsidies to silver plans. Insurers want to raise those rates to increase subsidies. President Trump also ended a provision related to cost sharing reductions, which drove up rates for silver plans.

We’ll end by pointing out an insight from behavioral economics called price framing. If you were initially shocked to see how expensive health insurance costs in every state, our guess is that you think states like Rhode Island ($287) and North Dakota ($293) aren’t so pricey after all. That’s because we are comparing their rates with much more expensive states, making them seem like a better bargain. In reality, according to the Kaiser Foundation, the average cost for a worker participating in an employer-sponsored plan is only $118 a month, or $1,415 per year. That’s a significantly lower cost and a powerful incentive for sticking with an employer.