by Daniel Carter
The news cycle seems even more absurd than usual considering what is blatantly being ignored. This week, the media has been obsessed with the Golden Globes and the virtue-signaling actors and actresses that attended the event. Oprah’s self-righteous speech had the mainstream media and their leftist minions ready to anoint her with the presidency of the United States. Last week, the media’s obsession was a book called Fire and Fury, which was written by Michael Wolff and supposedly talks about some of the unflattering details of the Trump administration. I don’t waste my time reading such nonsense, but so far, all the details of the book mentioned in the media have been quite inane.
All the usual absurdities reported by the mainstream media wouldn’t be so troubling if they weren’t glossing over one of the biggest stories regarding North Korea so far. First, I must mention that there has been some positive news on the North Korea situation. South Korea and North Korea have recently come together to have talks in the demilitarized zone. This could go a long way in resolving the potential conflict between the US and North Korea. South Korea’s president, Moon Jae-in, gave Trump’s tough talk credit for bringing North Korea to the table. Trump responded by telling South Korea that he is open to talks with North Korea as well.
Unfortunately, the military industrial complex is much more powerful than Trump. Even if the president takes all the necessary steps to avoid war with North Korea, the Deep State war hawks are there stoking the flames and trying to make the situation spiral out of control. They know that a massive war on the Korean Peninsula means yet another massive payday for them.
Every time the two sides make a bit of progress, the Deep State pushes the situation back towards conflict. After the good news of the talks between the north and south territories of Korea, some of the worst news so far has just come out. It appears that the US government is now heavily considering a pre-emptive strike on North Korea with the hopes that Kim Jong-un won’t retaliate. To suspect that Kim won’t retaliate is insane, and I believe the Deep State knows this. A pre-emptive strike would also entice China to join the fight against the US, which they said they would do if the US was the first aggressor.
If the Deep State shills surrounding Trump (e.g. H.R. McMaster) convince him that a pre-emptive strike is necessary, the strike will likely target one of North Korea’s missile launch sites. Where the US missiles would be launched from and where they would be targeting can be seen in the image below. 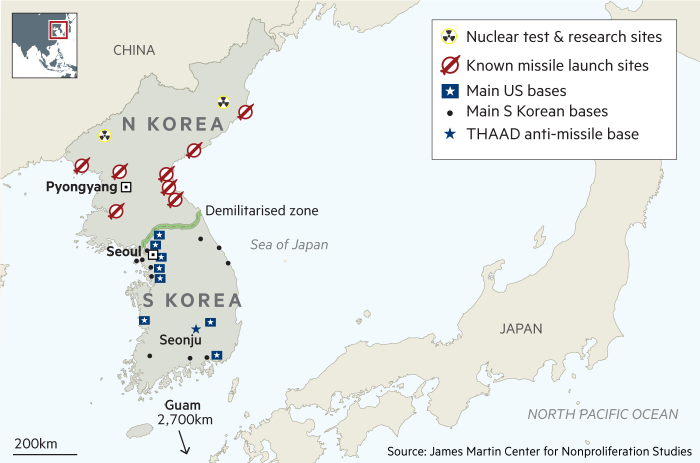 If the US strikes first and North Korea does retaliate, the situation could get extremely ugly. For more details on just how ugly this war could get, check out an article I wrote here. The Winter Olympics in South Korea will start next month, so I doubt the attack will happen then. However, that could be a good time for a false flag attack. I believe the Deep State will attack North Korea before Trump leaves office because they need a scapegoat in case things go terribly wrong. Let’s hope I’m wrong. Let’s hope the military industrial complex comes to their senses and works to maintain peace with North Korea.