“War was always here. Before man was, war waited for him. The ultimate trade awaiting its ultimate practitioner.” – Cormac McCarthy

It doesn’t take a biologist to see that mother nature has cruel and violent tendencies. Consider some of the fiercest competitors in the animal kingdom, such as apes, crocodiles, bears, snakes, hippos and many others. These creatures’ natural instincts are to resort to violence when it comes to the pursuit of power, territory and resources. Humans are playing the same game but on a much higher level.

In the early days of human evolution, humans were not far ahead of the animals I mentioned. Total warfare, as we know it today, would still take thousands of years to be waged. Humans still had very crude weapons, such as sharpened sticks and rocks. The violence back then could have involved conflicts between humans, but most of it was probably directed towards hunting and defending against large animals.

During the Neolithic Period, humans domesticated plants and animals, formed permanent villages and developed stone tools. This period also started the advancement of weapon technology. Spears with stone heads, stone axes and stone knives were invented during this period. These tools, along with the bow and arrow, which was actually invented thousands of years before the Stone Age, made war much more possible.

Finally, during the Bronze Age, human civilization saw its very first war, which took place in Mesopotamia between the Sumerians and Elamites. After that, war became almost an inescapable part of the human condition. Almost every generation since – in almost every region of the world — has been directly or indirectly affected by war.

For centuries, wars raged on while the advancement of weapons technology crawled along. Most battles were fought with spears, swords, axes, and bows and arrows. Ranged weapons slowly became more advanced, which included long bows, crossbows, catapults and trebuchets. Then, in the early part of last millennia, the invention of gun powder brought us the firearm and changed warfare forever.

Each step forward in weapons technology has made war a more distanced affair. Guns, tanks, planes, ships, artillery and missile systems have allowed militaries to kill their enemies from very far away and with devastating efficiency. These rapid improvements in technology were given to us by the relatively recent industrial revolutions. The most dramatic shift in the way wars were fought came during WWI. Things became a lot more mechanized, ranged and lethal.

Unfortunately, despite what certain academics say, we have hardly become a more peaceful species over the span of our long history. Nassim Nicholas Taleb and Pasquale Cirillo recently published a study that showed our propensity toward war has not significantly changed over the past two thousand years. While the per capita death rate (size of circle) has shrunk over time, the frequency of wars has increased in recent centuries. In fact, the 20th century was the most violent in terms of war casualties. 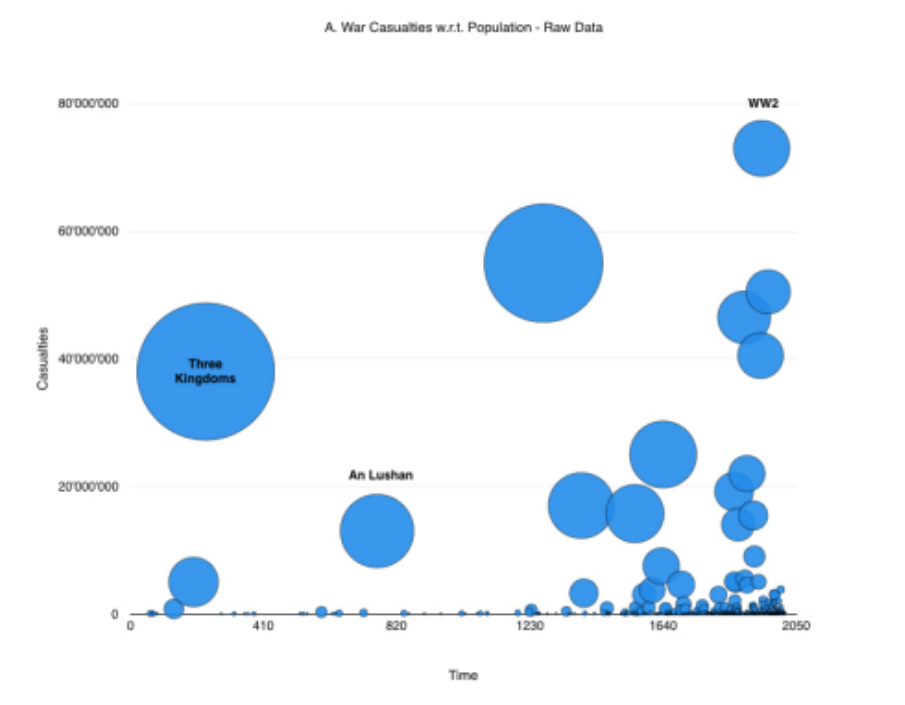 We are as belligerent as we have always been. This should be of great concern for our civilization as we have now produced weapons that could eliminate all life on earth. Major wars are not fought often, and the last major war the world fought was essentially ended with a nuclear explosion. With such a steep technological growth rate, the weapons owned by the world’s superpowers (I.e. US, Russia and China) make WWII’s weapons look like toys.

READ  Lumber Is Going Backwards Through The Supply Chain, Retailers Are Selling To Distributors
READ  "Which cable networks can one go on where one doesn't end up talking to architects of GITMO and the War on Terror? ...the security state went from clandestinely controlling news outlets to doing it on their payroll."

Even if these governments can refrain from annihilating the earth with nuclear weapons, the future of warfare looks daunting. Consider the emergence of Artificial Intelligence (AI). Now consider AI combined with the most advanced weapons in the world. That is already becoming a reality. The US, Russia and China are already experimenting with autonomous weapons. The fact that it’s an arms race will only accelerate the advancement of deadly AI. Below is an example of the US’s robotic weapons. This example is not fully autonomous, but don’t think they’re not already testing AI.

The future of war may be just as concerning as the present threat of nuclear annihilation. In the near future, the masses will no longer need to be convinced to fight wars for the elites. The people with the most power and money will be able to wage wars with autonomous robots. It might get even more dystopian if those robots start to think and act on their own. Because they would already be built for violence, they may just decide to exterminate our species. There is a lot that can go wrong with the combination of AI and weaponry.

The human race has been at war since the beginning of written history. However, our technology has advanced to the point where wars could end life on earth. In the near future, the technology we use for war could enslave us. It’s time to start questioning the fundamentals of human nature. If we cannot circumvent our desire for warfare, we may destroy ourselves. Time is running out.