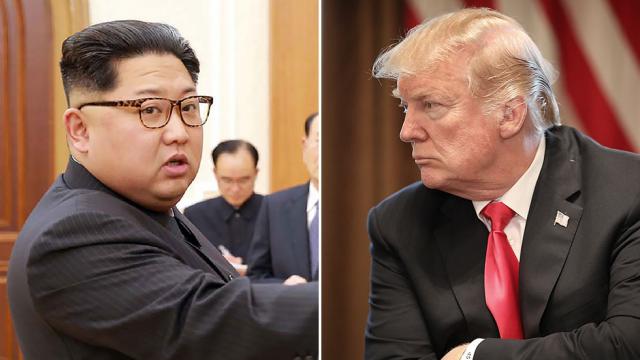 It’s all over the news that President Trump cancelled the historic meeting with North Korea’s Rocket Man, to use the POTUS’ parlance. However, this is hardly a surprise, especially considering the recent diplomatic tensions between the two countries, which culminated last night with a top Pyongyang apparatchik calling Trump’s Vice President Mike Pence a “political dummy”. The same North Korean diplomat warned that the announced summit between North Korea and the US is called off, as the two countries may soon  confront each other in a nuclear-to-nuclear showdown, to quote the delusional soy-boy from the North. Just moments ago, President Trump sent a letter to that crazy fat kid Kim Jong Un, which calls off the Singapore summit announced for June 12th, stating that, let me quote again:  “based on the tremendous anger and open hostility displayed in your most recent statement, I feel it is inappropriate, at this time, to have this long-planned meeting.” The world was “stunned” by the POTUS announcement, as per various talking heads blathering incessantly on the lobotomy box. However, this is just common sense on behalf of Trump, don’t you think?

Sadly, I was forced to cancel the Summit Meeting in Singapore with Kim Jong Un. pic.twitter.com/rLwXxBxFKx

As per the letter attached to the tweet, here’s an ominous warning from Trump: “You talk about your nuclear capabilities, but ours are so massive and powerful that I pray to God they will never have to be used.”

And then there’s the usual trolling: “Some day, I look very much forward to meeting you. In the meantime, I want to thank you for the release of the hostages who are now home with their families. That was a beautiful gesture and was very much appreciated.”

Then there’s a tease: “The world, and North Korea in particular, has lost a great opportunity for lasting peace and great prosperity and wealth. This missed opportunity is a truly sad moment in history.”

And finally, an open invitation to dialogue: “If you change your mind having to do with this most important summit, please do not hesitate to call me or write.”

The thing about communist regimes is that they will never disarm. Never. They never did. And North Korea will never give up its nuclear weapons, regardless of the rhetoric. Why? Well, look at Libya, Iraq, Syria et al. Any country that doesn’t have nuclear deterrence capability is prone to regime-change actions courtesy of Uncle Sam and whatever coalition of the willing. Also, there’s no example I know of in the last hundred years when a communist country agreed to disarm itself for the sake of “world peace” or whatever inept reason. There’s Ukraine, I know, a country that renounced its nuclear arsenal following the USSR collapse in 1991 (they weren’t communist anymore when they did that by the way), and look at them now…

However, is Trump’s decision to call off the nuclear talks with North Korea a bad idea after all? Well, Trump seems to understand how diplomacy works in that part of the world. Unlike Obama , Trump gets it that North Korea doesn’t function like a Western democracy, not culturally nor politically. For example, the last time Obama visited China, they left him standing on the tarmac, didn’t roll on “the red carpet”, hell, they didn’t even greet him. That’s a huge sign of disrespect, even if you’re recently arrived from Kenya. Instead of turning around, get back on the plane and leave, Obama very humbly walked in as a defeated man, bowing before Chinese dominance. That’s how this was perceived, culturally speaking, in China. If Trump had gone forth with the North Korean summit after what the top Pyongyang official said about VP Mike Pence, he would have been going into a trap, a negotiation in which he would have been laughed at by the Chinese and South/North Korean presidents. This would have been a sign of subjugation, i.e. Trump being still willing to meet with the North Koreans after they insulted his second in command. This is not the way diplomacy works in that neck of the woods.

Trump would’ve lost face, that’s the “scientific term” in Asia. Given the circumstances, it’s better, at least for now, to cancel the talks. I think it’s just a delay anyway, as the nuclear summit will probably go forward, because the North Koreans have something to gain from it, i.e. avoiding a nuclear war with the US. Remember, Trump alluded to this in the letter.

Trump wisely chose not to enter in a negotiation with North Korea looking weak. If he did it, it would have been a total failure, as in he wouldn’t have accomplished anything and the media would’ve had a field day chastising Trump for getting nothing out of it. Trump knows you never approach a negotiation from a position of subjugation, it would be nuts, as the enemy would steam-roll you.

Trump is the first US President in a long time who understands Asian politics. Just wait and see: North Koreans will get back at the negotiation table, as they’re boxed in; China has almost abandoned them, and they are completely alone. Their only trump card is that they developed the H-bomb, but that will not help them much when the next famine strikes.