Before digging into details, we would like to quote what we wrote on mining stocks on Monday: 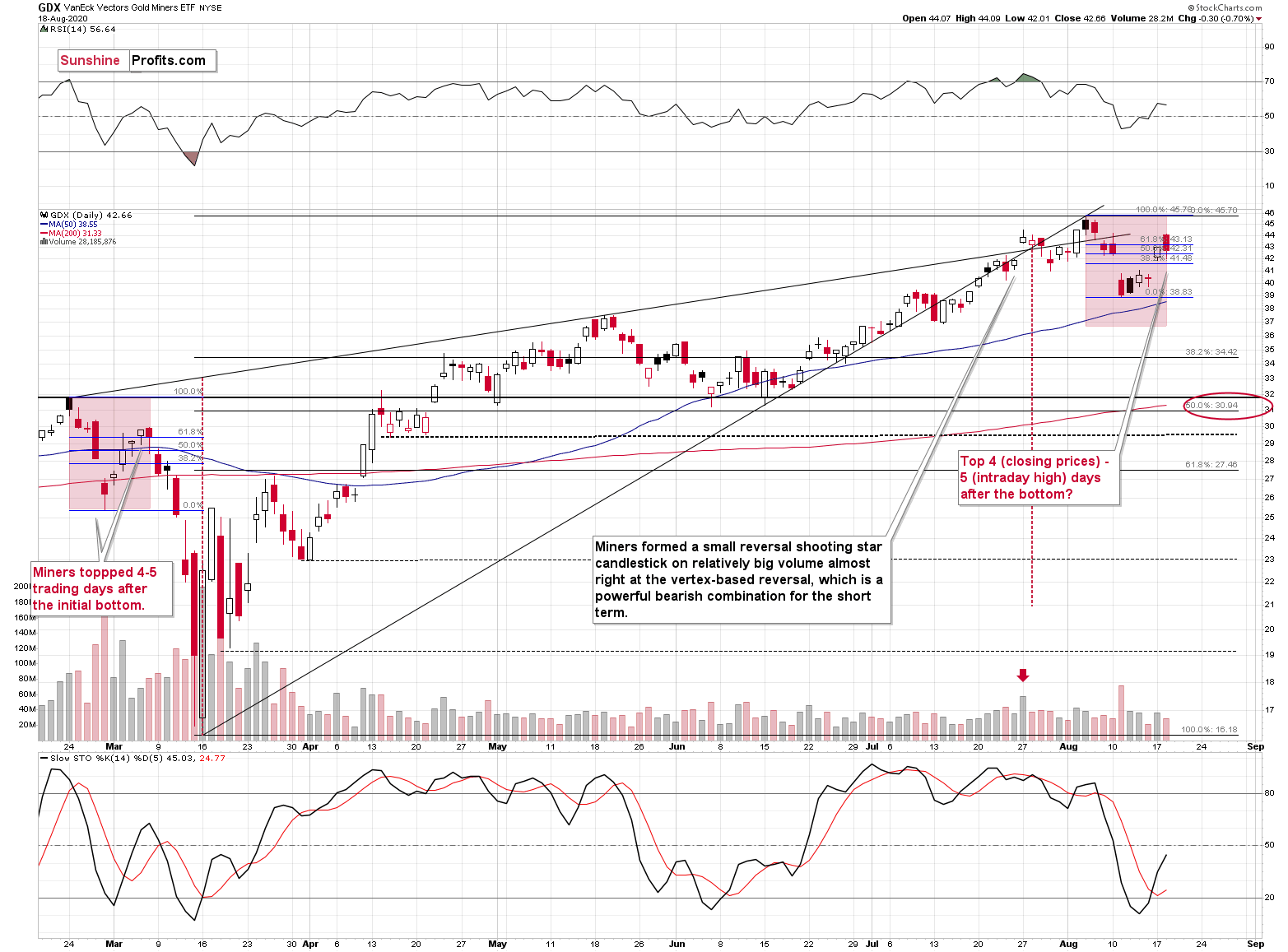 Back in March, gold moved back to its previous highs (in fact it moved slightly above it) before topping and right now, it’s consolidating lower. Still, we should keep in mind that there’s also the possibility that gold won’t repeat the March performance to the letter and history will rhyme instead.

Consequently, it might be more useful to monitor the market for signs of weakness and to pay extra attention to the time factor.

After all, time is more important than price; when the time is right, the price will reverse.

Back in February, it took 4 days after the top for the miners to form their initial bottom and we saw the same thing also this time.

Back then, it then took 4 (closing prices) or 5 (intraday extremes) trading days for the miners to top. Today will be the 4th trading day after the bottom, so if the history is to repeat itself with regard to time, miners might form the final top today or tomorrow. This would be in tune with where the general stock market is trading right now. It’s so close to its previous high that it could easily break to new highs and then invalidate this breakout today or tomorrow.

If gold does indeed rally to the previous highs or even moves slightly above them, we don’t expect miners to do the same thing. In fact, we think that they would be likely to top close to the 61.8% Fibonacci retracement level (at most) – at about $43.

Yesterday, we clarified the “close to” part: “close” means that miners could move a bit above it, just like they did in March. Gold miners moved to exactly $43 on Monday and closed at $42.96, so if gold moved significantly higher from here (say, $100), miners would also be likely to move higher temporarily.

Since miners already reached the $43 level on Monday, yesterday we wrote that we wouldn’t be surprised to see GDX at $44 or even $45 at the top.

In short, miners – and the general stock market – did exactly what we have outlined above.

The GDX ETF moved to $44.09 yesterday, but then declined on an intraday basis, and ended the session lower, despite gold’s daily gain.

This means that at the same time, we saw:

The above is a profoundly bearish combination for the next few days – weeks.

Wait – didn’t you say that gold could rally more?

Yes, we did. And gold could move higher while at the same time miners might not. That’s exactly what happened in March. Please take a look at the chart below for details.

The vertical, black line shows the day right after the top (we didn’t want the line to cover the daily performance at the top), and it clearly shows that while gold was one day after the top, miners were already 2 days after the top.

The top in the mining stocks (in terms of the daily closing prices) took place on March 5, which we marked with red, vertical line.

On March 5, gold was still below its initial February high and the USD Index was just starting to move lower after briefly pausing. In other words, miners decline started earlier than what we saw in gold or the USD Index.

One could say that the reason for it is was the situation in the general stock market. Indeed, the latter was already declining in early March. However, the fact that miners declined yesterday despite a daily rally in stocks makes the current case even more bearish for the miners. Besides, the invalidation of the intraday breakout in stocks is a sign that miners are likely to get a bearish push from other stocks.

What does that all lead to? To the likelihood that we saw the final top in the mining stocks, which might be the right shoulder of a head-and-shoulders top pattern (the red line on the HUI chart would be the neck thereof). At the same time, it could be the case that gold will make another attempt to rally above the previous 2020 highs. They key word here is “could” – it’s not something that is carved in stone. In fact, back in March, silver was weaker, and gold was stronger. We’re seeing the opposite right now – overall, the situation is already similar to what happened when the PMs were topping in March. Therefore, if gold moves slightly the previous highs – just like it did in 2011 – it could trigger the sell-off, but at the same time we would like to stress that this kind of move is not required for the sell-off to start. Especially in case of the mining stocks.

Naturally, the sell-off would be a temporary event and PMs and miners would be likely to soar in the following months.

Thank you for reading today’s free analysis. Please note that it’s just a small fraction of today’s full Gold & Silver Trading Alert. If you’d like to read those premium details, we have good news. As soon as you sign up for our free gold newsletter, you’ll get 7 access of no-obligation trial of our premium Gold & Silver Trading Alerts. It’s really free, and since the incoming volatility is likely to be significant, we invite you to sign up today.