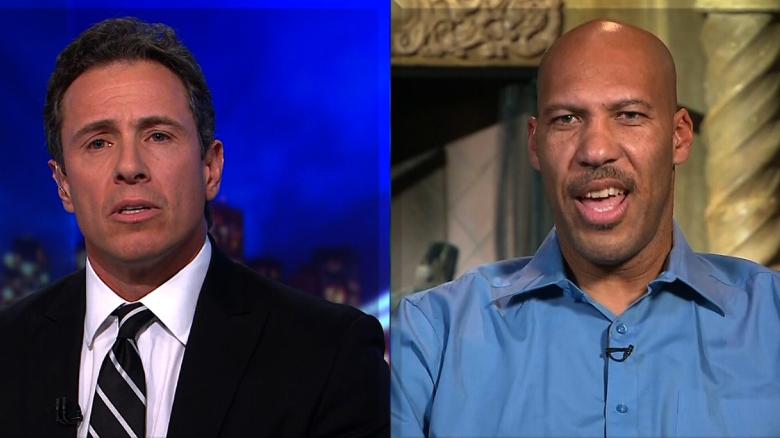 In what must be the most ridiculous interview ever carried out on CNN, Chris Cuomo (no fan of The Donald) speaks with LaVar Ball, the father of LiAngelo, the UCLA basketball player arrested in China. Now sure, LaVar may be anti-Trump, and that’s fine, but this interview is the most ridiculous, ludicrous and downright ignorant piece of broadcasting to ever hit the screens.
One would imagine that Cuomo, given the opportunity to make Trump look bad during Don Lemon’s usual spot, would be over the moon and lapping up every criticism to leave LaVar’s mouth, but the statements made by this guy are so ridiculous, that Cuomo ends up defending the president. You can watch the video below.
We are all well aware that Mr. Ball has asked why he should thank the president for interceding, and denies that Trump helped out in any way. But his assertions show not only a basic ignorance of the world in which we live, but a monumental lack of awareness of himself.
My personal favorite excerpt is when he says that his son would not have spent time in prison, because, “they would have seen his character, at only 18 years of age, and given him a pass.” His character? You mean the character that led him to go shoplifting for sunglasses whilst acting as an ambassador for his college and country?
He clearly does not understand a single thing about China. If anything, they would have thrown the book at him to set an example to other young foreigners who reside in Shanghai acting as though they own the place. He would have been lucky to get away with just three years. That’s the MINIMUM sentence!
Chinese prisons are not nice places to be. Prisoners have food delivered to them on a daily basis by family members because unless they have connections, the standard meals (rice with cabbage) are “paid” to gang members for protection.
LaVar also said that he, not the president is responsible for where his son is right now. It’s difficult to argue with that. But can’t he see that his son is a shoplifter? A thief? This is not something to proud of. Mr. Ball may think that petty theft is nothing important, but it is. It shows a serious flaw in character that you think you can steal things from other people. This was not a crust of bread being stolen to fill an empty belly…this was designer sunglasses. And if his father thinks that the three friends decided to steal for the first time whilst away in China, he’s very much mistaken.
The fact that he thinks his son will “get a pass” based on his character tells you all you need to know about the environment he lives in. Soft judges letting people off with crimes because they are minorities. It happens! To suggest that it doesn’t is a complete myth.
If no one else will thank the president for his actions, I will. Thank you President Trump for giving these kids another chance in life; hopefully they will follow a better path than the one Mr. Ball seems to think is the right one.
www.youtube.com/watch?v=pca-BHt8VsU