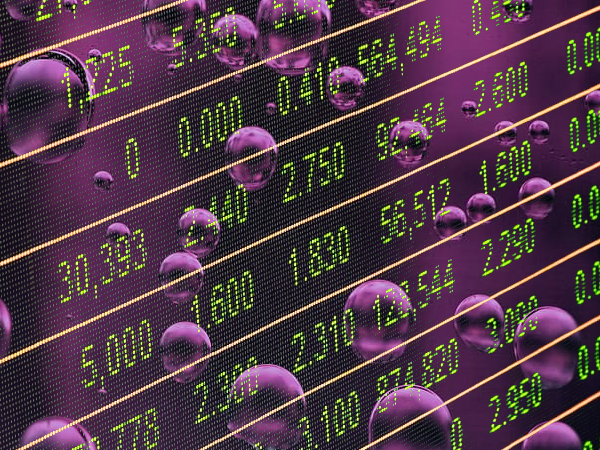 Many people have heard of “the 1%”, which is normally used to describe the top one percent of the wealthy.

In recent decades, as the bottom 50% of the United States has seen its collective share of income decline, the 1% has gained at their expense, gobbling up an increasingly large share of the nation’s wealth. 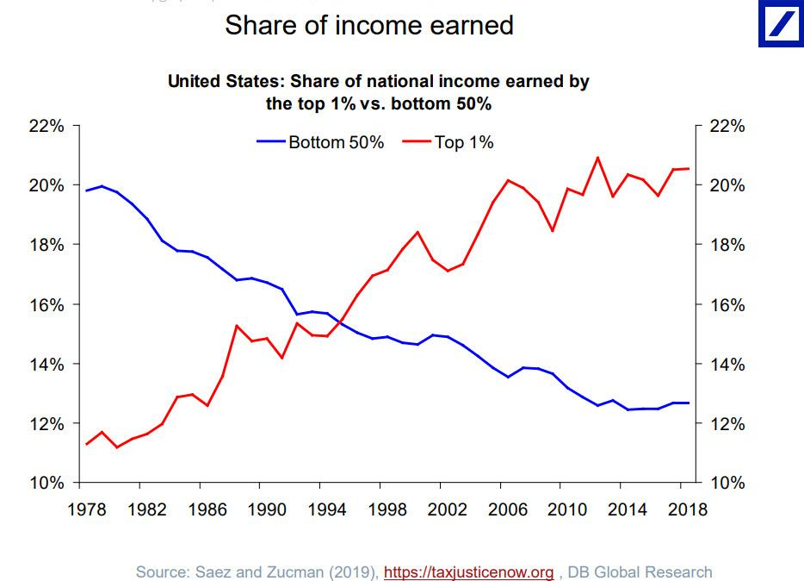 According to an article on ZeroHedge, since 2001, globalization has been a primary driver of this increasing gap in wealth inequality. Before that, as you can see on the graph above, the bottom 50% earned as much or more than the top 1%.

In the corporate world, a different type of “1%” exists; namely, within the S&P 500. The inequality among this group is signaled by a ratio that has not made an appearance since the tech bubble burst in 2001.

Market cap wealth that’s concentrated to this degree at the top, especially without the income to back it up, is rare:

A ratio like this is unprecedented, including during the tech bubble. During 2019, the net income concentration for the 1 percenters didn’t keep pace with their market cap concentration, similar to what happened during the 1999 concentration peak.

In the graph below, you can see both the market cap concentration and the lack of net income, which preceded the bursting of the tech bubble in 2001 and could potentially precede a similar outcome in 2020. 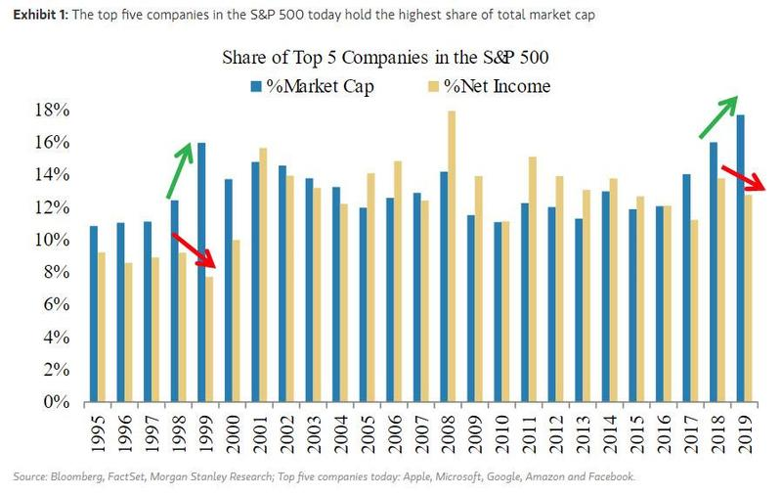 Also following the same pattern is the Fed’s expansion of its balance sheet prior to the 2001 tech bubble burst.That same balance sheet is being expanded again right now, and currently sits around $4.2 trillion, up from $3.8 trillion just four months ago.

These companies have likely paid out nice sums of money to their investors based on their inflated market cap. But if ZeroHedge is right, they will also “need to deliver on the income side of the inequality divide or risk a sharp decline in price.”

Sharp price declines in the top 5 companies of the S&P could trigger broader market panic. The 1% are financially prepared for this possibility, but the average person may not be.

One Way to Prepare: Do What the 1% Are Doing

Goldman Sachs thinks the strategic case for owning gold remains strong. In their note to investors – some of whom are one-percenters – they state:

Political risks, in our view, help explain this because if an individual is trying to minimize the risks of sanctions or wealth taxes, then buying physical gold bars and storing them in a vault, where it is more difficult for governments to reach them, makes sense.

Obviously the wealthiest investors have had a good run with soaring stock prices, some of which are based on inflated market caps. But they also see the writing on the wall after the last 10 years of a now-tiring bull run.

And according to a piece titled, “The World’s Super Rich are Hoarding Physical Gold”:

The head of an investment firm told Osnos that, “A lot of my friends do the guns and the motorcycles and the gold coins. That’s not too rare anymore.”

So perhaps follow the lead of many among the 1%, and consider shifting some of your assets into precious metalslike gold and silver.