It was a huge relief to see the charts of the Baltic Dry Index (BDI) and the U.S. retail sector ETF (RTH): both have soared to the moon, signaling that both the U.S. and global economies are booming: the BDI is widely regarded as a proxy for global shipping, which is a proxy for global trade and economic activity. 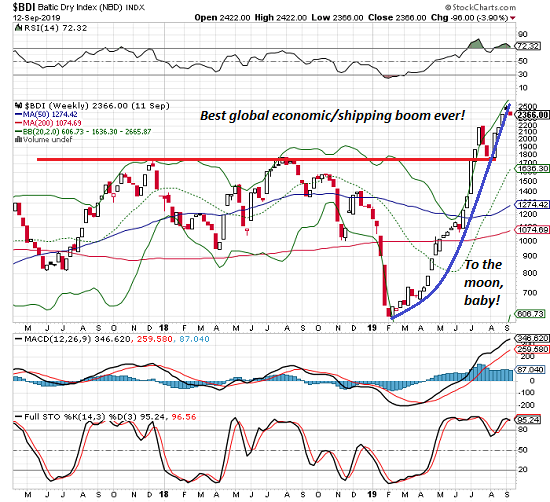 Amazon is 18% of the RTH basket of retail stocks, but the rest are conventional bricks and mortar chains with online sales: Walmart, Home Depot, Lowes, Costco, CVS, etc.

The American consumer must be ready, willing and able to spend freely since the retail sector is hitting new heights. 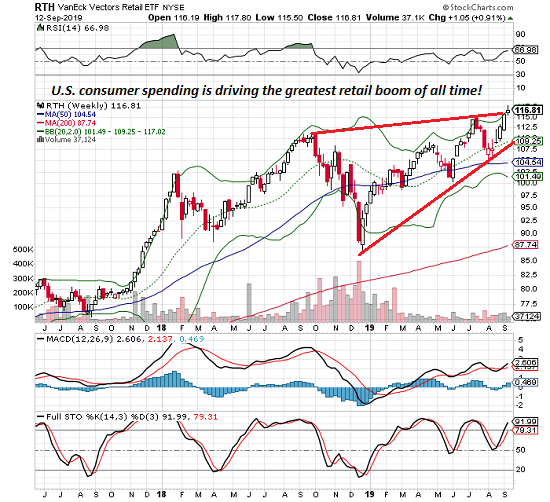 OK, now let’s change channels from soaring market valuations to the real-world economy. What planet are buyers of BDI and RTH on? Maybe the shipping and retail sectors are incredibly robust on Sirius B, but here on Planet Earth the global economy is weakening, trade is stagnating, shipping is in recession, and retail sales and profits are stagnating.

Lumping all American households in one basket gives a false signal of financial health. If we look at averages, debt levels are reasonable, incomes are notching higher and so expectations of rising household debt and spending are reasonable.

But this radically distorts reality: only the top 10% are creditworthy and have rising incomes; the bottom 90% are over-indebted, poor credit risks and their income is stagnant and/or precarious.

The top 10% of households–a mere 12 million households–are also precarious, as much of their wealth and income is based on insanely overvalued asset bubbles in stocks, bonds and real estate. The wealth effect fuels their free-spending ways (recall that the top 10% collect roughly half of all income and account for almost half of all consumer spending).

As all the asset bubbles pop, the reverse wealth effect kicks in. Once households feel poorer, they tighten their borrowing and spending.

Another under-appreciated reality is the top 10% of households have much lower levels of debt (relative to their income) than the average middle-class household. This has several sources:

1. The top 10% hasn’t needed to borrow as much for college, healthcare, vehicles, vacations, etc. because their higher income enables saving and paying cash.

2. The top 10%, especially the self-employed and small-business owners, tend to be debt-averse. They understand that debt is always a noose around the neck. As a result, the desire to take on more debt, even at near-zero rates of interest, is near-zero for many top 10% households.

3. The wealth effect is real for 10% households which have sold off bubble-valuation stocks, bonds, real estate, art, vintage autos, etc. The smart money has been selling these assets and pocketing the gains. The bottom 90% don’t own enough bubble-valuation assets to move the needle on their overall wealth, income and financial security.

Globally, those who want to borrow more are poor credit risks while those who are creditworthy don’t want more debt, regardless of how low interest rates fall. If we set aside the top 10% of households and enterprises, and focus on the creditworthiness and precariousness of the bottom 90%, we get a much more accurate picture of global debt exhaustion, a.k.a. debt saturation.

As I’ve written here recently, the recession that’s unfolding isn’t one triggered by crisis such as higher oil prices or a financial panic. It’s a recession of debt exhaustion and diminishing returns as doing more of what’s failed for ten years will finally fail spectacularly.