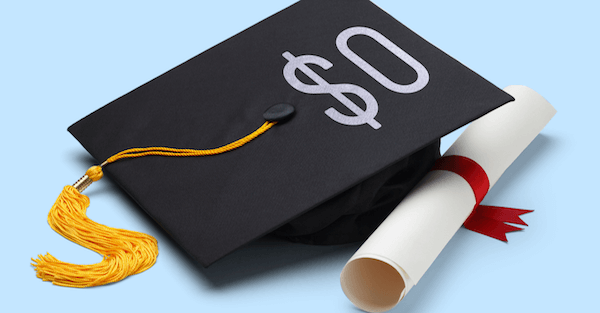 Bernie Sanders believes that FREE university education a “right, not a privilege.”

His fellow Bolshevik, Alexandria Ocasio-Cortez, also believes that tuition-free university “forms the basis of human dignity” and should be provided for free by any “moral society.”

They aren’t alone in holding these beliefs.

A recent survey conducted by CNBC shows that 60% of Americans support free university.

But what most of these people fail to realize is that there’s an enormous difference between an education and a university degree.

There’s obviously nothing wrong with a university degree. And for some professions they’re vital.

But a university degree is just an expensive piece of paper; it doesn’t actually confer any real knowledge.

An education, on the other hand, develops skills and mental agility to create real value in the world.

And while a university degree can cost you an enormous amount of money (students in America have taken out $1.4 trillion in student debt), an education can be completely free.

There are thousands of free resources out there that people can take advantage of to learn valuable skills.

For example, companies like Microsoft will teach you programming languages – for FREE – and then encourage you to apply for a job with them.

That’s an incredible opportunity to learn real-world, applicable skills that you can use to create an income for yourself.

In the same vein, Google recently announced a partnership with 120,000 libraries across the US to teach people how to code.

See also  ‘This Is Bulls**t’: Iowa Teacher Rants About Not Being Able To Teach CRT, Being Forced To Say Pledge Of Allegiance

And 96% of Americans live near a library.

(That is not counting the thousands of other books you can learn from – for free – at the library.)

There are also websites (like edX.org) where you can take dozens of courses from places like MIT, Stanford, Harvard, etc., all for free.

So every time I hear someone whining about wanting free university education, I always ask them how many online courses they’ve taken. How many books have they read?

I typically receive nothing more than a confused look in return.

But that’s the nature of entitlements: people feel that they should have everything provided for them without having to lift a finger to help themselves.

This mentality is becoming an epidemic in the West.

The Bolsheviks like to talk about education as an ‘investment’. And, to be fair, a more educated society is likely more productive, safer, and prosperous.

But to demand that the entire country invest in people who refuse to invest in themselves first– that’s absolutely ludicrous… and almost guarantees a BAD investment.

Personally I have a number of philanthropic activities and genuinely enjoy doing what I can to help people.

Not too long ago I helped out a wounded US Army veteran who had lost his leg in Afghanistan.

He had been abandoned by the Department of Veteran’s Affairs, and was trying to raise close to $100,000 to have a new surgical procedure performed overseas.

(It was a ridiculous story– the FDA had banned the procedure in the US because they had deemed it ‘unsafe’. Unlike being deployed to Afghanistan, which they apparently think is perfectly safe.)

This guy Joe didn’t wallow in self-pity. He was busting his ass, using every resource he could find to fix his own problem.

That’s exactly the type of person I like to invest in– because you know they won’t squander your investment. They’ll cherish it and grow from it.

I invested in Joe… and as a result of his surgery, he not only danced at his wedding and participated in a 5K, but the FDA has now approved the procedure in large part to his success.

That was a great investment.

Let’s be honest– a lot of people waste away in university. They skip classes, drink beer, and learn nothing.

Others work their butts off to learn and live as much as they can, and genuinely become better people as a result.

This notion of treating them all the same, and investing equally in each of them, is beyond insane.

As a final point, I do want to remind you about another investment in education that I make each year.

For the past ten years, I’ve been sponsoring a 5-day long entrepreneurship workshop in Lithuania.

It’s free to attend– I pay for all of it. Again, it’s an investment. But I only accept people who demonstrate that they’re working hard to help themselves first.

The application deadline is coming up this Sunday (and we already have tons of applications for the year).