While the stock markets thrive on uncertainty, investors are mostly unhappy with uncertain political and economic scenarios. As Trump presidency was confirmed, the world market went into an economic shock as Asian stocks fell. It is not just the election of Trump into power that raises eyebrows in the community of investors and analysts. The US is long overdue a recession and the chances are high that a recessive economy will dictate Donald Trump’s reign.
Is it the Trump effect?
The initial shock followed by euphoria on Trump’s election has largely waived off by now. In a few days, he will be assuming office but in an economy of low unemployment rates, officially. However, official figures are never to be trusted completely as the economy is barely holding on to its boom and is likely to go bust in a matter of months. 2017 could be a year in which the economy finally bows down to the pressure and starts to bust.
Trump could be the man whose protectionism can drive the economy towards recession. His idea of launching trade wars, bringing manufacturing jobs back etc. have not sunk very well with analysts and they claim it is only a matter of time that he channels his protectionism to bring the long overdue recession to the economy. If he only abided by his promise of forcing manufacturing processes to come back to the US, he would raise costs of production significantly which would lead to fall in demand of the American goods worldwide, even locally. Add a trade war with other countries to the recipe and there could be less favorable trade in the future.
The new President and his promises can put an end to the long boom that the economy went through. Historically, an economic expansion after a war does not last for more than 58 months. On January 20, 2017, it would be 91 months of a booming economy slowing down into a recessionary phase.
Bonds falling back, no more Trumphoria
After reaching a 12-year high in December 2016 after Trump’s election brought initial euphoric reactions, Bond yield have started giving in to pressure. The UMich inflation outlook is heading towards a record low while the Bloomberg Comfort Index is hitting the floor. An expected 98.5 UMich consumer sentiment was met with a 98.1 final index. A crisis in the US car loans will be hitting soon because of lenient lending and over-optimistic outlooks during the boom. Only consumer spending has held the GDP into place. What if manufacturing costs rise high? The price will increase, demand will go down, and we will be nearing a recession. 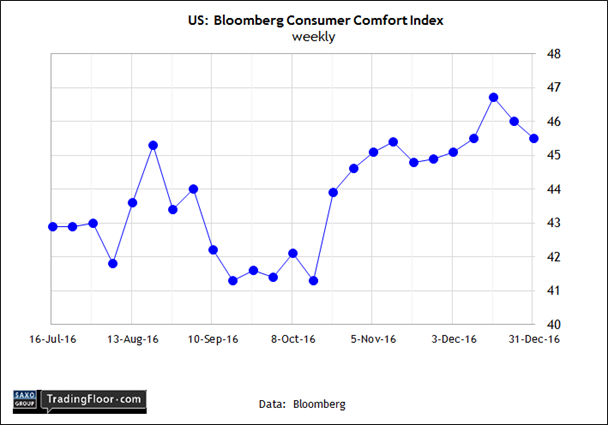 Tax receipts are NEGATIVE!
Keeping the GDP figures and official numbers aside, a major landslide in tax receipts has led many analysts to believe that a recession is imminent. Tax receipts are not just moving down, they have also turned negative in the last year. The estate tax is all set to be eliminated. This will create a massive deficit in the government earnings and create another, more regressive, redistribution of income in the favor of the rich. The estate tax is imposed as a 40% tax on all estates worth $5.45 million and above upon death.

What, in the end, is the final trigger?
Donald Trump’s presidency will be coupled with economic uncertainty for years to come. He has also promised to get rid of the Dodd-Frank Act. This act regulates lending by banks and was enacted to ensure that the economy does not face recessionary forces anytime soon in the future. 7 years down the line, the act could be repealed and easy lending by banks will lead to a recession American has been expecting for long. The fact all these factors might work together is another dangerous aspect to be considered.
Conclusion:
Rising protectionism, falling tax revenues, and falling bond yields can trigger a crisis which can lead to fall in stock market along with economic recession.


See also  With Housing Bubble 2.0 starting to crater and the Fed poised to trigger a new Great Financial Crisis, this Irishman's epic rant from 2008 is more timely and relevant than ever
See also  Is a margin-call induced stock market selloff imminent?