by Viraj Shah
A Trump presidency comes with its quirks. While Obama is busy gathering farewell messages, people believe that Trump might save American jobs, just like he did with Carrier Corporation. However, it is too early to believe that the incoming president understands the labor market and how global and local changes affect it. His opposition to the Trans-Pacific Partnership (TPP) and NAFTA are well known but there is more bothering the US labor market than just outsourcing.
If you believe that a Trump presidency will magically bring millions of manufacturing jobs back home, here is a fact check for you.

Though Trump has many businesses to his name, he has never worked for a technologically advanced firm. This means that he has lesser understanding of how technology can wipe out jobs without the clamor he makes over outsourcing. David Autor, MIT Labor Economist, has expressed his concerns on this issue. He suggests that the damage done by automation to many middle-class jobs is more disturbing than outsourcing. Even United Technologies, the parent firm of Carrier Corporation where Trump seemingly saved 750 jobs, will be making a $16 million investment in automation, costing more jobs in the years to come. 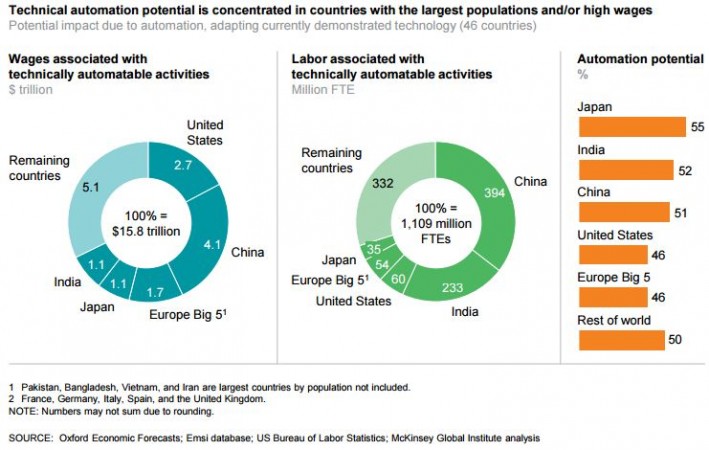 Trump has been into many businesses but manufacturing is not his forte. When he claims to bring ‘millions of manufacturing jobs back to America’ he fails to understand that jobs are not packed into containers and shipped to other countries. The loss of jobs in the USA is credited to technological advancements and need of better productivity at lower costs.
data1.ibtimes.co.in/cache-img-0-450/en/full/632845/1484475643_technical-potential-automation.jpg

No one, not even Trump and his tall claims of bringing manufacturing jobs back, can bring the good old factory jobs back. When corporations ‘outsource’ they are essentially saving costs on human input. When companies go for ‘automation’ they ‘invest’ in assets that bring them value, day-in and day-out without sick leaves. It increases productivity, gives more output, and saves the company time and effort in training and re-training individuals.
It is important to note that there will be lesser need of semi-skilled workers and people who can ride the wave of technology will be in high demand. Jobs like assembly of parts of a finished product, which do not add much value to the product itself nor affect the costs primarily, are likely to be outsourced. Trump has maintained a distance from such a challenge in this sector and held onto his rhetoric which would most likely be campaign propaganda.
Conclusion:
Automation is a reality. Its time government and people accept it and enhance their skills. Being skilled and smart is going to play a vital role in how long you stay in a particular job.