You would think after the insanity that was CHAZ/CHOP, Seattle might have taken a hard look at their relationship with law and order. You would be wrong.

Seattle is in King County, and the County Executive’s Office is moving ahead with plans to “abolish prisons.” A leaked email published by Christopher F. Rufo, contributing editor at City Journal, shows active plans to reduce both adult and juvenile detention and close the county jail in Seattle. The juvenile detention center would be converted to house other programs by 2025. According to Rufo, this plan will eliminate 60% of the county’s jail capacity.

Meanwhile, Seattle’s City Council has majority support—at least seven of the nine members—to slash the police department budget by 50%. Mayor Jenny Durkan has said she would veto this drastic cut, supporting Police Chief Carmen Best. Durkan has committed to cutting $76 million of the $400 million budget,” however. Oddly, the “Summer of Love” mayor may be the only bulwark against complete insanity.

Rolfe has posted more documents from the County Executive’s office. They appear to be for training or other meetings to discuss dismantling the criminal justice system. The woke county leaders would probably call it “reimagining” criminal justice. Others may call it managing a descent into chaos.

The ideas In the document are based on the same horrible ideas as the City of Seattle’s new employee training. The systemic racism, white supremacy, and critical race theory that permeated training, given only to white employees, scream through these plans as well.

The premise of the entire presentation is that white people need to oppress and confine those who do not share their white culture. White culture is described in the same language used in the documents from the Institute for Smithsonian’s National Museum of African American History and Culture. That “teaching tool” has since been removed by the museum. But King County is forging ahead with the concepts. 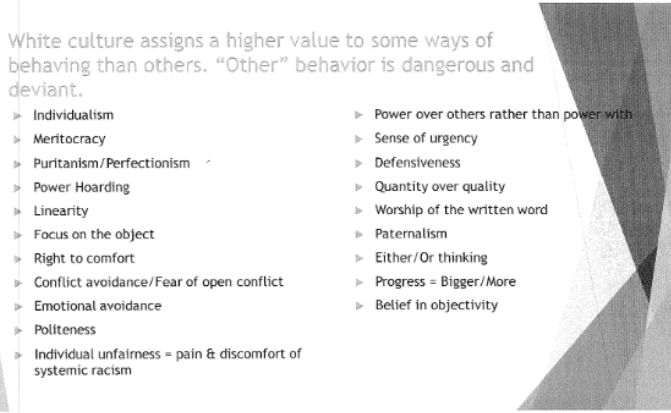 It is always stunning to note that woke anti-racists speak in a language that white identitarians like Richard Spencer would nod in agreement with. People who actually claim to be white supremacists would gladly claim the majority of items on the list. The problem is that woke anti-racists ascribe the racist beliefs of people like Spencer to all whites using the garbage concept of “Cultural Racism”: 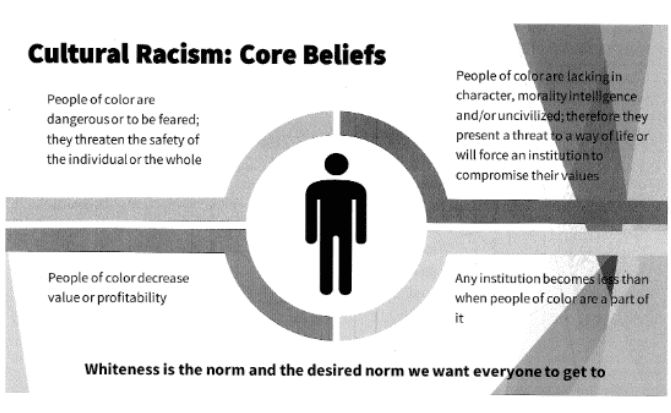 This entire philosophy is a dangerous way to explain disparities and attempt to hang all differences between the races on discrimination. It is pretty apparent that the woke left would like to make these words synonyms. That would make their preferred policies easier to implement. The joining of these ideas has already spawned horrific public policies. The Obama era restorative justice policy on school discipline is just one example.

BRYAN PRESTON: Why Seattle Is Likely to See More Riots and Violent Crime.

Chief Best is telling Mayor Durkan and the city council that they’re about to get people killed. But police officers won’t be among the casualties if Chief Best can help it.

Mayor Jenny Durkan and the city council have voted to take non-lethal tools out of the hands of police, which is in effect a vote for violence, property destruction, and anarchy. So that’s what they’re more likely to get now. We’ve seen the consequences of this before, recently.

Or as Roger Kimball writes: It Doesn’t End Well.