The below are tweets from Refuse Fascism, and if you can look at them and see them as benign, then more power to you.

In response all the friendly notes we’ve been receiving: We and fellow patriots are going forward t.co/UrtPtCGymm #Nov4itBegins pic.twitter.com/44oVgXznUA

twitter.com/refusefascatl/status/922832594697322497/photo/1?ref_src=twsrc%5Etfw&ref_url=http%3A%2F%2Fwww.foxnews.com%2Fus%2F2017%2F11%2F03%2Fantifa-apocalypse-anarchist-groups-plan-to-overthrow-trump-regime-starts-saturday.html
This is a video from Fox News, and I will be referring to an article from Fox, also. 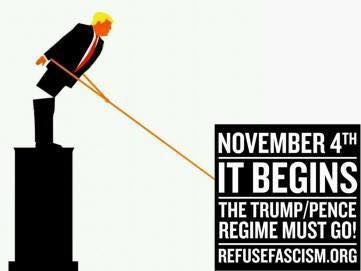 www.foxnews.com/us/2017/11/03/antifa-apocalypse-anarchist-groups-plan-to-overthrow-trump-regime-starts-saturday.html
Fox speaks about the November 4th protests being planned by Refuse Fascism.  The fact that the Left-wing group is saying they are not associated with the violent group “Antifa” is in my opinion not true.
A series of anti-government, leftist rallies set to descend on major cities nationwide Saturday is drawing the attention of local officials, who, like the organizers themselves, fear the events could be hijacked by violent masked anarchists.
The left-wing “Refuse Fascism” group is using Nov. 4 as its kickoff for demonstrations in nearly two dozen U.S. cities, protests it says will continue “day after day and night after night ? not stopping ? until our DEMAND is met.”
The “DEMAND” is the removal of President Trump and Vice President Pence.
The gatherings are being described as a kind of “Antifa apocalypse” on right-wing media, according to The Washington Post. Several sites are expressing particular alarm about the loosely-defined left-leaning group, which preaches a version of ferocious anti-government chaos that often uses “domestic terrorist violence,” according to a recent FBI report.
The FBI report can be found here:  www.politico.com/story/2017/09/01/antifa-charlottesville-violence-fbi-242235
The article was published on 9/1/2017, and it has some harsh things to say about the violent Left group Antifa.  Rallies are scheduled over the next few months across the country, including in Texas, Oregon, Missouri and Florida. Authorities are particularly concerned about those in states where virtually anyone, including activists under investigation for instigating violence, can brandish assault rifles in public.
“Both the racists and a segment of violent Antifa counter-protestors are amped for battle in an escalating arms race, where police departments are outmaneuvered, resulting in increasingly violent dangerous confrontations,” said former New York City police officer Brian Levin, who has been monitoring domestic militants for 31 years, now at the Center for the Study of Hate and Extremism at California State University, San Bernardino. “It’s an orchestrated dance. The rallies spill over into social media and then even more people show up at the next rally primed for violent confrontation.”
As you can see this is no matter to take lightly.  Among the 20 cities where rallies are set to occur are Atlanta, Austin, Boston, Chicago, Cincinnati, Cleveland, Honolulu, Los Angeles, Minneapolis, New York City, Philadelphia, San Francisco and Seattle.
The anarchist group, whose name comes from term “anti-fascist,” made news earlier this week for allegedly harassing a female reporter at Columbia University and for seven arrests at California State University, Fullerton, amid reports of head-punching and pepper-spraying.
“You cannot try to ‘wait things out’,” a Refuse Fascism call to action reads. “Those who lived through Nazi Germany and sat on the sidelines, looking on as Hitler demonized, criminalized, and eventually rounded up one group after another, became shameful collaborators with monstrous crimes.”
Tapping into movements like Occupy Wall Street and the Women’s March, Refuse Fascism said it hopes to protest non-stop, 24/7 “until this regime is driven from power.”
The organization is engaged with a broad coalition of groups, including the Revolutionary Communist Party — but says they are committed to a nonviolence stance.
They can say a “nonviolence stance,” but at the same time they say “protest non-stop 24/7 until this regime is driven from power.”  Give me a break!

The website www.snopes.com/is-antifa-planning-a-civil-war/ is saying basically there are no protests planned for November 4, 2017.
CLAIM
Law enforcement agents have announced that “antifa” is planning extended violent unrest or civil war beginning on 4 November 2017.
RATING
FALSE
ORIGIN
In August 2017, rumors began to spread on social media that anti-fascists (a name often shortened to “antifa”, which has become shorthand for a subset of protestors, usually clad in black and accessorized with bandannas and who are evidently unnerving bloggers and vloggers enough to be the pet topic of many an angry online rant) were planning extended unrest, riots, killing random citizens, or outright civil war beginning on 4 November 2017:
They say the below tweet is not true:  us-east-1.tchyn.io/snopes-production/uploads/2017/10/Screen-Shot-2017-10-10-at-3.05.18-PM.png

In fact, this tweet is accurate, as this is what the group states on their website:  refusefascism.org/


TRAILER: THE TRUMP/PENCE REGIME MUST GO! In The Name of Humanity, We REFUSE To Accept a Fascist USA: A Better World IS Possible from Revolution Books on Vimeo.
I hope you watch the above video as it comes from their website, which I have now archived.
archive.is/EPqbo
I wrote Snopes earlier today, and I basically said to them what I have said here.  I have gotten no response.
This video is made by Refuse Fascism

On November 4, we will take to the streets in cities and towns across the country. Continuing day after We will continue, growing from thousands, to millions. Not leaving until our demand is met
refusefascism.org/2017/08/06/…