Every week, we are fortunate enough to gain numerous subscribers to our weekly newsletter. So, first, I certainly want to welcome you to our missive, but I also need to brief our newest readers where we have been positioned over the last couple of months.

On May 4th, we penned: “It Never Hurts To Ring The Cash Register:” we suggested taking profits and reducing risk in portfolios after a stellar run from the beginning of the year. We made specific recommendations to our RIA PRO Subscribers (Try Free For 30-Days) at the time:

“A common theme through today’s report is ‘Profit Taking.’ Over the last couple of weeks, we have continued to discuss taking profits and rebalancing risks. Yesterday we sold 10% of our many of holdings prior to earnings to capture some profits. We also added to some of our Healthcare holdings, which have been under undue pressure and represent value in a market that has little value currently.”

“From a portfolio management standpoint, the reality is that markets are very extended currently and a decline over the next couple of months is highly likely. While it is quite likely the year will end on a positive, particularly after last year’s loss, taking some profits now, rebalancing risks, and using the coming correction to add exposure as needed will yield a better result than chasing markets now. Given that every given year has some corrective action in it, betting this year will be different is a low probability event.”

What we didn’t know at the time is that the May sell off would start the next week.

Then, June 1st, we wrote “Selloff Overdone, Looking For A Sellable Rally:” To wit:

“In the very short-term the markets are oversold on many different measures. This is an ideal setup for a reflexive rally back to overhead resistance.”

Again, for our RIA PRO subcribers, we recommended taking on index positions to participate.

The rally we have been discussing since the beginning of June has been a good trade and increased the value of our portfolios.

However, for most investors, it has simply been a recovery back to the same level almost 2- months ago.

This is why managing risk is important.

Okay, now that you are up to date, let’s talk about what the Fed said, didn’t say, and what it means from here.

What The Fed Said, & Didn’t Say

It is worth noting it is the SAME statement following each meeting with only slight wording changes each time. The text below shows those red lined changes in the release from the last two meetings. I am only excerpting the more important points for today’s discussion.

“Information received since the Federal Open Market Committee met in Mayindicates that the labor market remains strong and that economic activity is rising at a moderate rate. Job gains have been solid, on average, in recent months, and the unemployment rate has remained low. Although growth of household spendingappears to have picked up from earlier in the year, indicators of business fixed investment have been soft.

The Committee continues to view sustained expansion of economic activity, strong labor market conditions, and inflation near the Committee’s symmetric 2 percent objective as the most likely outcomes,but uncertainties about this outlook have increased. In light of these uncertainties and muted inflation pressures, the Committee will closely monitor the implications of incoming information for the economic outlook and will act as appropriate to sustain the expansion, with a strong labor market and inflation near its symmetric 2 percent objective.

Wall Street voraciously searches for these changes to try a derive the Fed’s intention about future policy actions. It is akin to reading the “tea leave” in the bottom of a cup.

It was the last sentence above which got the bulls excited as it was interpreted to mean rate cuts.

However, what the “bulls” missed is the Fed DID NOT say the “would” cut rates, only that they would monitor incoming data and act appropriately.

“The Federal Reserve on Wednesday said it does not expect any rate cuts this year, but did forecast one for 2020.” – CNBC

This is a far cry short of reducing rates 3-times this year, and more next year, pushing rates back towards the zero bound.

This leaves a lot of room for the markets to be disappointed.

However, there is sufficient reason to expect the Fed will indeed cut rates, it is only a question of timing and by how much.

“What does it mean when the real yield on the 5-year T-note is down to around 30-basis points and for the 10-year maturity, a mere 40-basis points? It’s the bond market’s way of foreshadowing the weak economy that lies ahead.

There can be little doubt that Powell took his cue from [the ECB’s Mario} Draghi and the ECB’s concern over the weakening growth backdrop and even deeper inflation undershoot in the Euro-area. I am talking about the recession. You know – the one that nobody ‘sees.’”

Given that the Fed has a very limited “toolbox” currently, I would expect them to use rate cuts VERY sparingly. Considering rates fall on average between 3-4% during a recession, the Fed is starting at just 2.4%. From a historical perspective, when the Fed does engage in rate reduction programs, it has not been an ideal point to be heavily invested in the financial markets. As noted by PNC this week:

“That would absolutely be a policy misstep. With industrial production data coming in ahead of expectations, retail sales ex-autos and gas beating up expectations, earnings season for Q1 beating and Q2 revisions moving in a positive direction, it just seems to me as if the backdrop doesn’t warrant that swift of a policy reversal and that cuts really shouldn’t be on the table.” – Amanda Agati

Also, the 10-year yield is hovering at just 2% and seems the equity market is under appreciating the probability of a bad scenario which is being embedded into bond prices. Given the bond market is a reflection of the “flight to safety” by investors, it suggests the “bulls” could be wading into a trap.

(Note: it is NOT the inversion of yield curves which signal a recession, it is when those inversions reverse.) Lastly, the markets are already pricing in two events which haven’t even occurred yet:

There is a decent probability that neither happens soon, and could be a “sell the news” event when they do.

Let me reiterate something I wrote previously which I believe to be most important at this juncture:

“In 2008, when the Fed launched into their “accommodative policy” emergency strategy to bail out the financial markets, the Fed’s balance sheet was only about $915 Billion. The Fed Funds rate was at 4.2%.

If the market fell into a recession tomorrow, the Fed would be starting with roughly a $4 Trillion balance sheet with interest rates 2% lower than they were in 2009. In other words, the ability of the Fed to ‘bail out’ the markets today, is much more limited than it was in 2008. 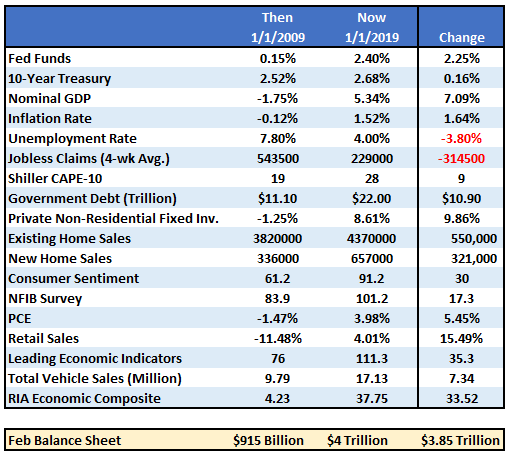 “The critical point here is that QE and rate reductions have the MOST effect when the economy, markets, and investors have been “blown out,” deviations from the “norm” are negatively extended, confidence is hugely negative.

In other words, there is nowhere to go but up. Today, it is entirely reversed.

The extremely negative environment that existed in 2009, particularly in the asset markets, provided a fertile starting point for monetary interventions. Today, as shown in the table above, the economic and fundamental backdrop could not be more different.”

Lowering interest rates and quantitative easing are “incentives.” Incentives work when there is pent-up demand for a product, but are much less effective when everyone always has what you’re offering.

Bill Bonner had the best explanation:

“Investors’ animal spirits were titillated brought last week by the Fed, which — in the wake of a deteriorating economy — seems ready to shift to Mistake No. 3 even before it has completed Mistake No. 2.

We recently suggested this “sellable rally” had room to go into the end of this month. That still seems to be the most likely case. However, July through September are going to become much more difficult from both an earnings and economic perspective. The red shaded bars denote the last two times that markets hit “all-time” highs coincident with an ongoing “sell signal” as denoted by the yellow circles. In both previous cases, the subsequent rally, while failing to hit new highs, almost reversed the sell signal before the markets turned lower again. While I am not suggesting that current market action will play out in the same fashion, it is worth considering before getting aggressively long-biased at this juncture.

More importantly, just about every other major index is NOT CONFIRMING the S&P 500’s new highs. Small, Mid, International, and Emerging Markets are all suggesting that something isn’t quite right, and even the “tech heavy” Nasdaq has failed to set new highs so far.

So, what is pushing the S&P 500 index to new heights. It has primarily been the rotation into “defensive positioning,” which also suggests a “risk off” mood by investors. (This rotation is something we recommended to our clients in Mid-may.)

The risk is that the current breakout is another failed attempt in this 18-month long consolidation process. The chart below shows a more concerning backdrop. As noted above, it is when the 10-year less the 2-year yield spread starts to increase, combined with a monthly “sell signal,” which as denoted major turning points in the market. Therefore, we don’t recommend buying the breakout just yet.

Why aren’t we getting more bearish in our positioning?

Simply because the market has done nothing wrong as of yet.

If the market can breakout, and confirm new highs, then a push towards 3100 is likely.

However, such a move would only likely be temporary and would only serve to further inflate current overvaluation and extensions of the market. Such will exacerbate the expected decline in late summer and early fall.

We suggest maintaining a long-equity base in portfolios, but continue to carry both higher levels of cash and hedges against a pickup in volatility. (We added Gold and Goldminers a couple of months ago for this very reason.)

Stay long for now, but I would not get too comfortable.

If you need help, or have questions, we are always glad to help. Just email me.