There are many historical models in which the spending/investing of wealthy families drives the expansion of local economies.

The increase in farm debt while farm income declines is putting unbearable financial pressure on American farmers, who must be differentiated from giant agri-business corporations. This is placing immense pressure on farmers, pressure which manifests in rising suicide rates.

If this isn’t the nadir of rural America, it’s certainly close.

This decline of financial viability and sharp rise in stress isn’t limited to rural America. The decline of rural regions and small towns is a global phenomenon, and the causes are many but boil down to two primary dynamics:

1. Cities and megalopolises (aggregations of cities, suburbs and exurbs) attract capital, infrastructure, markets, talent and government spending, and these are the engines of job creation. People move to cities to find jobs and opportunities.

As an example, consider the San Francisco Bay Area megalopolis of roughly 7.6 million people in 9 counties and 101 cities. The region added over 400,000 new jobs since the 2008-09 Global Financial Crisis and over 1 million additional residents since the early 2000s.

In effect, the region absorbed an entire new city with 400,000 jobs and 1 million residents. Roads and public transport did not expand capacity, and housing construction lagged. As a result, traffic is horrific, homelessness endemic and housing costs are unaffordable to all but the favored few.

2. Globalization has lowered the cost of agricultural commodities by exposing every locality to globally set prices (supply and demand) which are also distorted by currency fluctuations.

The relatively low cost of fuels has enabled produce from thousands of miles away to be shipped to supermarkets virtually everywhere.

These mega-trends have slashed farming incomes while costs have risen across the board. This squeeze as revenues decline and costs increase has driven even the most diligent and devoted farmers out of business or reduced them to hanging on by a thread.

What would it take reverse these trends?

1. The price of agricultural commodities and products would have to triple or quadruple, so that farming would become lucrative and attract capital and talent.

Imagine an economy where ambitious people wanted to get into agriculture rather than investment banking. It’s a stretch to even imagine this, but if energy suddenly became much more expensive and crop failures globally became the norm due to fungi, plant viruses and pests that can no longer be controlled and adverse weather patterns, this could very rapidly change the price of ag products to the benefit of local producers.

Another potential dynamic is the decline of global trade due to geopolitical issues and domestic politics, i.e. the desire to reshore “strategic industries” such as food production regardless of the higher costs such a trend might cause.

The repudiation of finance as the engine of economic “growth” (or pillage, if we remove the gloves) and the prioritization of real-world production are also trends that could arise as the financial bubbles pop and cannot be reinflated with the usual central bank trickery.

2. Wealthy owners of capital tire of unliveable cities and move to small towns, bringing their capital and entrepreneurial drive with them.

There are many historical models in which the spending/investing of wealthy families drives the expansion of local economies. Colonial America and the Roman countryside are two examples of this dynamic.

When capital flows to small towns, jobs are created as the wealthy hire people to serve their needs. These new jobs create new markets for small businesses, and these new opportunities attract new capital.

Some owners of capital are passive owners, collecting rents from afar and spending this income in the local small-town economy. Others are restless entrepreneurial types who will fund new local businesses as a challenge or as an opportunity that’s been ignored in the mad rush to sprawling unaffordable cities.

Both kinds of owners bring new spending and investment.

Wealth enables this class to bring its luxuries and desires with it, and so cultural activities favored by the wealthy get funding they never had before.

Wealthy types follow leaders just like everyone else, and once they hear of wealthy people extolling “the good life” in a small town, they investigate this option in a way they would never have done before.

Thus capital attracts capital, opens market opportunities, increases employment and starts attracting talent which is frustrated by the high costs and competition of the megalopolises.

Why would wealthy owners of capital move from places like Los Angeles, San Francisco, Seattle and New York City to small towns?

Any urban dweller in an overcrowded megalopolis can give you the answer: the traffic is unbearable, homeless is expanding, taxes and costs are skyrocketing and so on. The cultural benefits the city offers are increasingly outweighed by the friction, even for the wealthy.

What would cause the trickle of wealthy people leaving cities to swell into a mini-flood? A recession that guts tax revenues would cause cities and counties to raise taxes and fees, many aimed specifically at the rich, while reducing spending on the intractable problems of traffic, homelessness, public education, etc.

Most city dwellers cannot leave for lower cost climes because they need the higher income of city employment and they have a stake in the real estate market via a home they own and a mortgage to pay.

The wealthy, whose income is derived from capital rather than solely labor, have the financial freedom to leave the city but retain much of their income.

If both of these trends manifest, we might see those who can abandoning increasingly unlivable cities for lower cost, safer and more livable small towns.

The only other development that would restore urban-rural balance is the collapse of the entire neo-feudal (neoliberal) regime, including fiat currencies, central banking, financialization and financialized globalization.

In the near term, scarcities that drive agricultural prices higher and people fleeing unliveable, unaffordable cities are likelier possibilities. 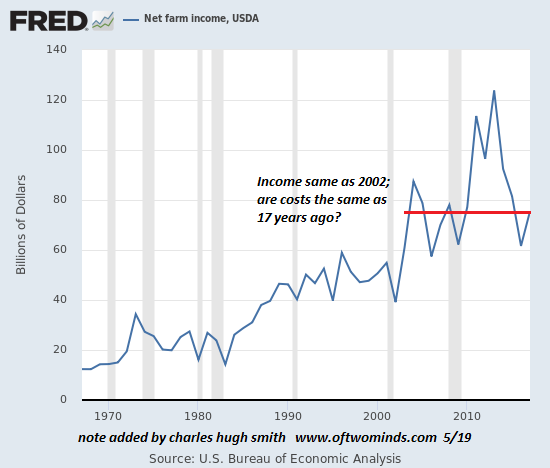 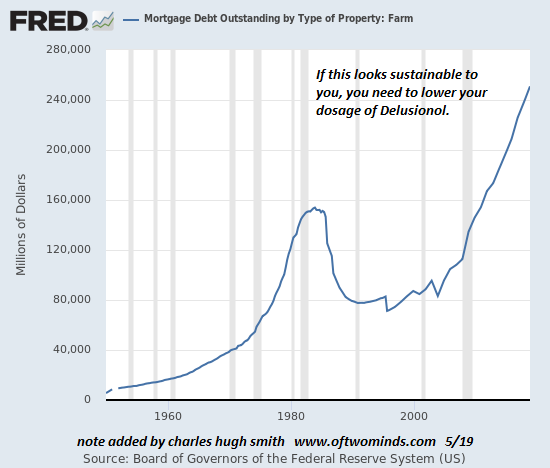