“A Roy-ale With Cheese®. What do they call a Big Mac©?” – Pulp Fiction 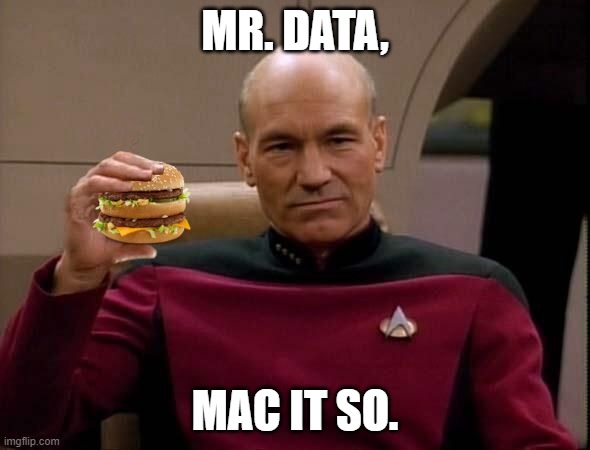 Picard doesn’t have an iPhone® he got unlimited Data with his Android©.

The last time I had a Double Quarter Pounder with Cheese™ from McDonalds© here in Modern Mayberry, it cost me $4.79. It was over a month ago, but I remember biting into the bun feeling the warm hamburger . . . warm? Dangit.

What our local McDonalds® misses in quality they make up for by taking longer than any other fast-food place in town. Why do we go there? The fries and the $1 drinks. Anything more complicated than that is like asking a puppy to land a P-51 Mustang. You know the puppy really wants to make you happy, but it’s really only good at looking cute and sleeping.

I think the employees at McDonalds© must like to sleep. A lot.

We have exactly five fast-food restaurants in town, and my theory is that there are have two excellent managers that make good food, promptly. We also have one manager that’s not great, but focuses on making the food tasty and the orders correct even though you might not get it in ten minutes. We have another that makes good ice cream, but the burgers taste like NHL® puck rejects. Then we have the last in line – the manager of McDonalds©. 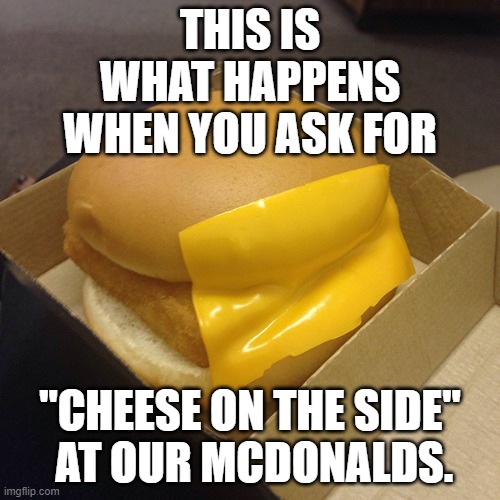 I always wondered where McDonalds™ got fish shaped like that. The asquarium?

The Mrs. and I were going to stop at McDonalds® for fries and drinks at around 1 PM. There were six cars in line before the speaker at the drive-through. They weren’t moving.

We opted to go elsewhere but noticed that all six of the “wait here because your order surprised us” parking spaces were also full.

I asked The Mrs., “Do you think that every day the manager looks at his watch and says, ‘Dang, it’s busy at 11:30 AM. Again! Who could have predicted that? Why does this keep happening to us?’”

Yes, our McDonalds© is bad. Heck, one time I asked for two large fries and got about 300 small ones. 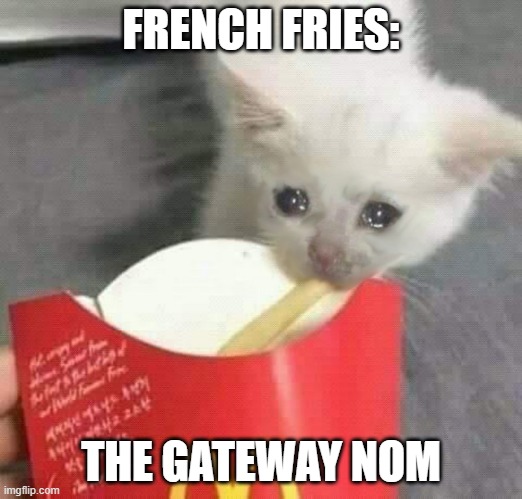 Also, this is really a cat, your honor.

But McDonalds® can be instructive. There are McDonalds© restaurants all over the world. We have exchange rates with other countries, but The Economist™ had a different idea to judge purchasing power around the world: The Big Mac™.

This is a little bit of genius. The ingredients of a Big Mac© are roughly the same no matter where you go, and the amount of labor required to produce a burger is pretty constant, so you can use that to judge what the real purchasing power of the dollar is versus other countries.

It’s a cool idea, and like most cool ideas, it started as a joke. But you can go here (LINK) and see that, as of January 12, 2021, the United States dollar was overvalued compared to most other currencies. That’s what happens when your currency is preferred for use in international trade. The Swiss Franc is generally the most overvalued: that’s what happens when people really trust you.

The Swiss may avoid inflating their currency, and they might be boring, but their flag is a plus. 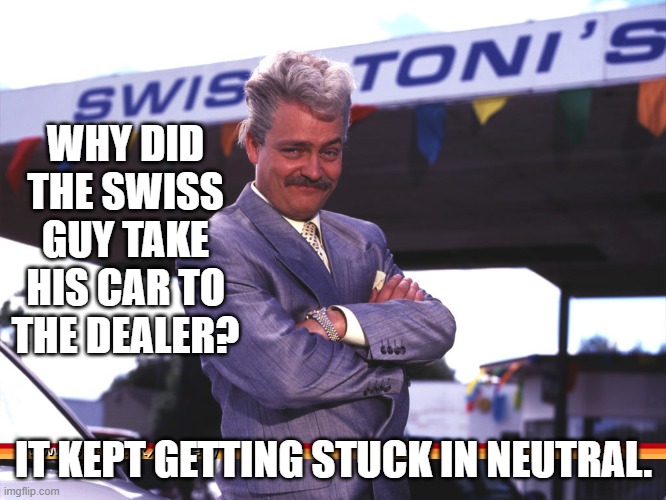 Where is the Capital of Venezuela? In a Swiss bank account.

But the Big Mac® is useful for other things, too.

One of the problems of being in a pot of slowly boiling water is that you don’t really notice the temperature going up until it’s too uncomfortable to bear. One of my old standards was the $5 lunch. Before we moved to Alaska, spending more than $5 for a lunch at a fast food place was rare. Once we got to Alaska, we at least found a use for our spare kidneys: paying for lunch.

Just like a Big Mac™ is a Big Mac© all over the world, it’s a Big Mac® even going back into the past. So, we can judge purchasing power around the world, and through time. It’s like Back To The Future minus the Deloreans® and 88 gigaWatts.

Okay, what does a Big Mac™ tell us about inflation?

If you look at the following graph from Seeking Alpha®, you can see what a Big Mac™ should cost if the official, government Consumer Price Index (CPI) was telling the truth. In 2016, it would have cost about two bucks. 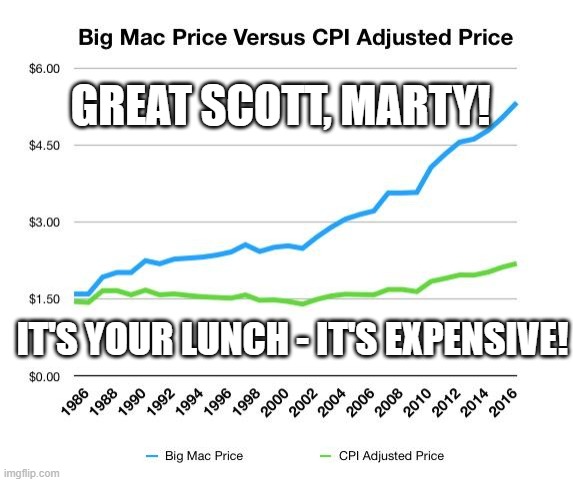 I once made a graph of my old girlfriends. It had an ex-axis and a why-axis.

I was actually surprised at the data. I guess I’ve been sitting in the boiling water too long, but I was expecting that the price would have gone up more in the last four years. I guess not.

But that’s one hallmark of economic difficulty – a period of deflation hits first. As astute comments at this very site have noted – it’s more than the quantity of money, it’s the velocity.

The Federal Reserve™ could print $2 trillion and give it to Jeff Bezos and cause zero inflation – as long as Jeff didn’t spend any of it on his goblin-like girlfriend (or anything else, for that matter). Or maybe he should spend money on her. She’s so goblin-like I worry she’ll raid my village to steal children.

When people get scared or don’t have any money, they’re not spending it. When the stimulus is popped into zero-interest business loans, well, it goes right into the business bank account. If I owned a business, I’d take all of the free money the bank could give me. Unfortunately, the banks are finally on to my “laser printer and green ink” scheme so I’ll just let the government do that for all of us.

Small businesses aren’t making money. Landlords not receiving rent aren’t out partying. And none of these people are paying taxes on income they didn’t make.

Just like me, the government can keep printing money until it runs out of ink, and force enough through the system to make it look like there’s a functioning economy. But too much stimulus eventually fails even though this year I used my stimulus check to buy baby chickens: money for nothing and the chicks for free. 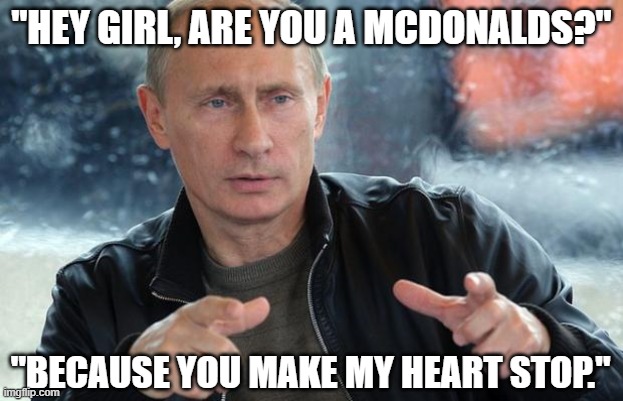 What does Putin want by thanksgiving? Turkey.

However, for presidential politics, the very best time to have a recession is in the first year of the first term. Then, hopefully, the economy is in a full recovery by the time of the next election. Maybe. That’s the old calculation. As Herbert Stein said, “If something can’t go on forever, it won’t.” The ultimate failure of a currency made up of nothing but hope and ink is always preordained. It can’t go on forever.

The only question is when it won’t.

But we did learn that the Big Mac© is useful in more ways than one this week. In Modern Mayberry, though, it might be undercooked, so eating it wouldn’t be one of the uses. The Mrs. doesn’t believe me – “John, raw meat at McDonalds™ is rare.”