1/ #China’s GDP is an input number and not an output figure like in western economies. National accounts are based on data collected by local governments which are rewarded for meeting growth targets; hence, they have an incentive to skew the data they provide to the Central Gov.

2/ Looking at different data sets one will see that #China is merely growing. PMI sentiment is falling fast; a number below 50 denotes a contraction and not an expansion as the GDP growth rate suggests. Manufacturing (49.8) & New Export Orders (48.2) have already fallen below 50.

3/ Moreover, #China‘s Industrial Production, a measure of growth in sectors such as manufacturing, mining & utilities, is decelerating. For the month of October, #Industrial_Production, expanded by 4.7% down from 5.8% in September.

4/ Another worrying sing is #China‘s #Real_Estate market. Second-hand #residential #properties appear to be under significant stress. Prices in the main cities have stalled. Now hovering close to zero.

5/ Office Space is not looking any better, either. During Q3, the vacancy rate across 17 major cities, as per the commercial property group CBRE, stood at 21.5%. Considering that most Chinese people tie their wealth to property, this is an alarming sign.

6/ On another note, #China‘s mobile phone shipments are painting a weak economic picture as well. The avg shipment growth rate YoY change has been negative since early 2017 (approx. -11.7% YoY). However, during the first half of 2019, the growth number actually turned negative.

7/ Meanwhile, #China’s auto sales growth has turned sharply negative. For 2018, passenger car sales fell by -17% YoY for almost every month. This weakness has continued into 2019, where the Year to Date Average YoY decline stands at -14.4%.

8/ Last but not least, exports from #China’s main Asian trading partners to China have collapsed. Since the beginning of 2019, exports to China have rolled down to negative territory from an average YoY growth rate of 20%. This data does not coincide with China growing at 6.0% 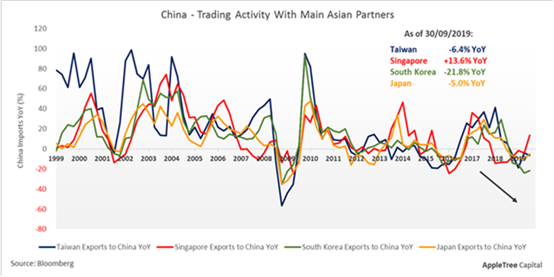 9/ Having said all this, the

, in a research paper published in March 2019, estimated that #China‘s GDP growth from 2008-2016 could be 1.7% (annually) lower than publicly acknowledged. https://brook.gs/2CEoEjA

10/ All this in a highly levered economy. #China‘s Total Debt to GDP has skyrocketed to ~276% from 168% in 2008. Since then, both government & corporate leverage have ballooned to unforeseen levels.

13/ Slowdown + Excess Debt = Corporate Defaults #China’s NPLs stands at 1.81% while provisioning coverage is at 192%. If we include the sub-performing loans this figure comes to 5.0%. Given the extreme leverage,the enormous provisions imply that the real NPL ratio is much higher

14/ Hence, #China’s GDP growth rate will be very tough to maintain. We could see some temporary signs of growth picking up, but these unproductive investments will soon weigh on China’s future growth. More so, if China’s GDP is not what it appears to be.

15/ Once #China reaches that point, the only way for it to continue to grow will be for the #Impossible_Trinity to break. 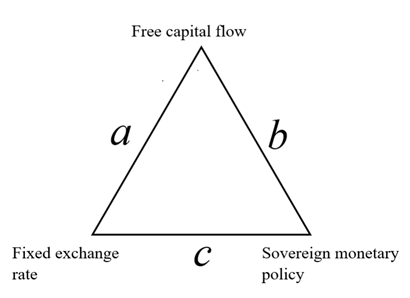 16/ The “#Impossible_Trinity” is a concept in economics, that states, that it is impossible to have simultaneously for a prolonged period of time: Free capital movement A fixed foreign exchange rate An independent monetary policy You can only have 2 at time

18/ Since the sum of all transactions recorded in the BoP needs to be zero, #China has been forced to turn its #Capital_Account positive. Given there are #capital_controls, #China has been having a hard time attracting #FDI.

19/ Hence, #China has been divesting its presence from abroad to cover for the lack of incoming capital. In 2016 China’s Net Outward Investments (Investments – Divestments) reached 278bn USD, this number came down to 29bn USD in 2018 and is likely to go negative in 2019.

20/ At a time, and despite all controls, when “hot money” has been leaving #China (under the radar) via foreign earnings and funds’ transactions misreporting.

21/ So, something has to give. Until 2014, #China intervened in the FX markets to strengthen its competitive position by buying #USD, keeping the #Yuan “cheap”. From 2014 however, China has come on the other side, selling USD to defend the #Yuan from falling.

22/ Which strikingly coincides with the increased deviation in #China‘s BOP Errors & Omissions line, from both the actually reported flows and the final capital positions. The total figure (cumulatively) since 2010 comes to -1.2tn USD.

23/ Also, by reconstructing #China‘s FX flows (since 2010) (ie. Trade, FDI, Portfolio & Capital Flows) a discrepancy of 1.1tn USD appears in China’s FX reserves. Given that China has been underreporting FDI inflows by approx. the same amount its FX reserves could be much lower.

24/ If it weren’t for the #Capital_Controls & the #Current_Account Surpluses all these years, the #Yuan would be much lower. With the world slowing down and #China facing a Current & Fiscal Account deficit, only Capital Controls are holding the Yuan from devaluing.

25/ Hence, #China faces two major challenges, an Internal Economic Conundrum & holding together the #Impossible_Trinity. Will China be able to hold the two imbalances together? If economic history can be any guide, it will be very hard for #China to continue on the same path.