Ask just about any diehard atheist what the most dangerous part of human nature is, and they will tell you it’s religion. In all honesty, this used to be me. And to be fair, religion has inspired people to commit some of the obscenest atrocities in human history; The Crusades, the German Peasants’ War, French Wars of Religion, and the Thirty Years’ War, to name a few.

But what major acts of violence have been committed by major nations in the name of religion in modern times? There have been sporadic occurrences of religious violence by the underdeveloped world. For example, the Sunni and Shia wars in the Middle East, the Nigerian Civil War, the First and Second Sudanese Civil Wars and the Lebanese Civil War were all fought over religion. However, there is now something far more malignant in human nature than religion. In the modern world, political ideology has replaced religion as the main dogma that leads people to commit heinous acts.

After World War Two, the United States rose to become the world’s empire. But they did not rally their citizens and allies around a religion. Instead, they rallied around the political ideology of liberal democracy. This ideology has given the US a supposed moral high ground to subjugate its enemies. Since WWII, the US has killed more than 20 million people in the name of democracy.

The period before and during WWII also showed us how much more murderous political ideology had become than religion. Nazism and fascism were particularly murderous due to the fact that they were ideologies mostly based on ethnic cleansing. During their relatively short reign, the Nazis killed over 20 million people, including 6 million Jews in concentration camps.

With perhaps the most vicious political ideology ever discovered, Communists killed roughly 100 million people in 100 years. Not only is Communism not religious, it is based on heavily anti-religious rhetoric. The Communist leaders despised religion because they wanted the state to be the supreme ruler. Unfortunately, even after all the carnage and failure it has caused, Communism was never defeated like Nazism, and thus is still a popular ideology today. 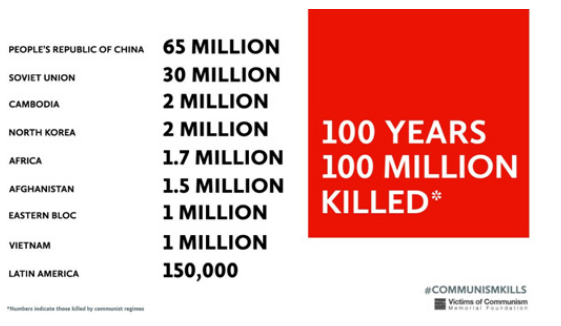 READ  The State Convinced People It Was DANGEROUS for Them Not to be Watched. Now Many Believe Surveillance Tech Is “for our own good”
READ  Here's What Inflation Is, Why It's Dangerous and Its Painful Remedy
1,937 views