Was it ever plausible that China’s economy could grind to a halt and there wouldn’t be any consequences for the U.S. economy? No.

Many commentators talk about supply chains in China, but how many have actually visited factories in China, other than carefully choreographed PR visitsto suitably high-tech facilities? I’ve visited many factories in China, and not with a staff of minders who swiftly guide the visitors through the happy story of high-tech wonderland.

I’ve visited some high-tech facilities but also many low-tech factories, where most of the supply chain originates, usually with one or two bored local government functionaries. You get a much less distorted view of the supply chain on the ground, away from the carefully guided tours.

Since we weren’t important visitors, nothing was staged. Workers glanced at us, as in what are they doing here?, but otherwise we simply observed everyday operations.

As I’ve reported here for a decade, profit margins in the vast majority of these supply chain companies are wafer-thin, with 1% being bandied about as a typical profit margin. Due to the extremely distorting way imports and exports are recorded, as little as $10 of every $400 iPhone “imported” from China actually stays in China as wages, overhead and profit. We estimate China only makes $8.46 from an iPhone.

Most of the high-value components are manufactured elsewhere in the world, and all the profit and overhead flows to Apple HQ in Cupertino, California.

The reality is that much of the supply chain is at risk of financial collapse. Many if not most of the thousands of spontaneous protests in recent years in China are not political; they’re workers demanding back pay or promised bonuses from shuttered supply-chain companies.

Here’s how bankrupt supply-chain factory owners deal with bankruptcy: they leave in the middle of the night and vanish. The workers get stiffed and there’s no recourse, no court hearing, no nothing.

The financial underpinnings of the supply chain have been eroding for years, as this unvarnished December 2018 report from a Chinese economist explains.

A Great Shift Unseen Over the Last Forty Years: Look at our profit structure. To put it plainly, China’s listed companies don’t really make money. Then who has taken the few profits made by China’s more than 3,000 listed companies? Two-thirds have been taken by the banking sector and real estate. The profits earned by 1,444 listed companies on the SME board and growth enterprise board are not even equal to one and half times the profit of the Industrial and Commercial Bank of China.

China’s economic decline indicates that there is a major issue with the focus on expansion and growth: It has deviated from the fundamental and moved to speculation. These are the words of former chief of Chinaâ€™s central bank, Zhou Xiaochuan.

What are our current financial risks? They are hidden, complex, acute, contagious, and malevolent. Structural imbalance are massive, and violations of law and regulations are rampant.

We have rampant speculations everywhere, in too many aspects. In short, it’s arbitrage.

In other words, a consequential percentage of the supply chain companies in China are only viable due to expanding debt and speculation. Any disruption of this fragile balance between losing money manufacturing/assembling but covering the losses with risky speculative gains will sink the companies: the doors are locked and the owners disappear rather than face the music.

The unpaid workers have little choice if they can’t find a job within days: they have to return to their ancestral villages and towns, where paid work is scarce but it doesn’t take much to get by.

The cost of living in China’s major cities has been soaring for years, and factory workers’ pay has not kept up. If jobs dry up, or the employer doesn’t pay the promised wages and bonuses, hanging out in expensive cities with no income is not an option.

Some workers may opt to return home just to avoid getting the coronavirus in crowded dormitories and factories.

U.S. corporations that assume their supply chains will return to normal in a week or two are in for a big surprise: consequential chunks of their supply chains, likely chunks they never paid much attention to, will dry up and blow away. The factories will not re-open, and the workers won’t return.

Any way they cut it, costs will rise whether Corporate America seeks suppliers outside China or alternative suppliers in China. With global wages stagnant for the past decade or two, raising prices is a non-starter. Net-net, corporate profits will fall even if sales remain robust, which is unlikely given the world’s largest economy and manufacturing center is grinding to a halt.

Once the supply chain breakdown comes home to roost in Corporate America, the mass delusion that the U.S. economy is invulnerable will collapse in a heap. Was it ever plausible that China’s economy could grind to a halt and there wouldn’t be a domino-like collapse of all the weak links in its supply chains? No. Companies living on debt and speculation only needed the slightest push to careen off the cliff into insolvency. The coronavirus is that push.

Was it ever plausible that China’s economy could grind to a halt and there wouldn’t be any consequences for the U.S. economy? No. Alas, mass delusions always end badly. 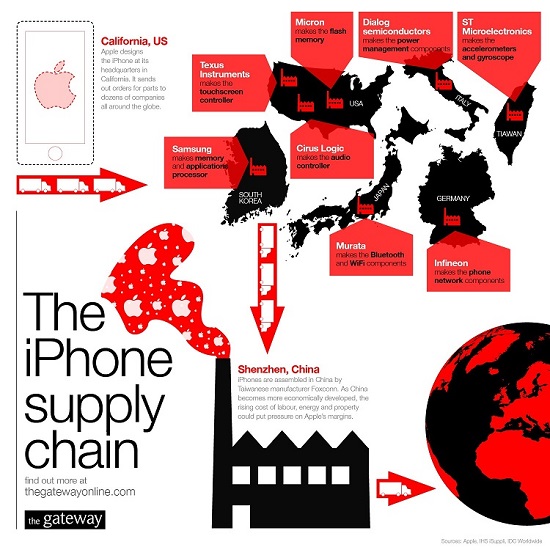