‘When elephants fight, it is the grass that gets trampled” is an old African proverb – one that I believe describes the plight of We The People.  As we are told Hurricane Florence is the worst hurricane in history – even Biblical – FEMA is said to be stocking up on coffins. But that is not all We The People are dealing with – financial collapse seems to be at our door.  It does not take a rocket scientist to know that this Hurricane will not help.

President Trump says we are better prepared than we have ever been before.  I don’t doubt that, as I think he cares more about this Country than any President I can remember.  Yet he is a man in the dark pit of a chaotic global war, and make no mistake about it – the whole world is at war.  The New World Order is eating away at the United States, and President Trump is trying his best to maintain our sovereignty as a Republic.

But further, it is the Dark Powers/Satan versus the Light Powers/Jesus Christ.  I saw Elon Musk talk about the fact when he was a child, he was afraid of the dark.  But being the genius he is, he read about what the dark actually is – the simple absence of light – the absence of photons.  In other words, we fear less when we actually understand what it is we fear. 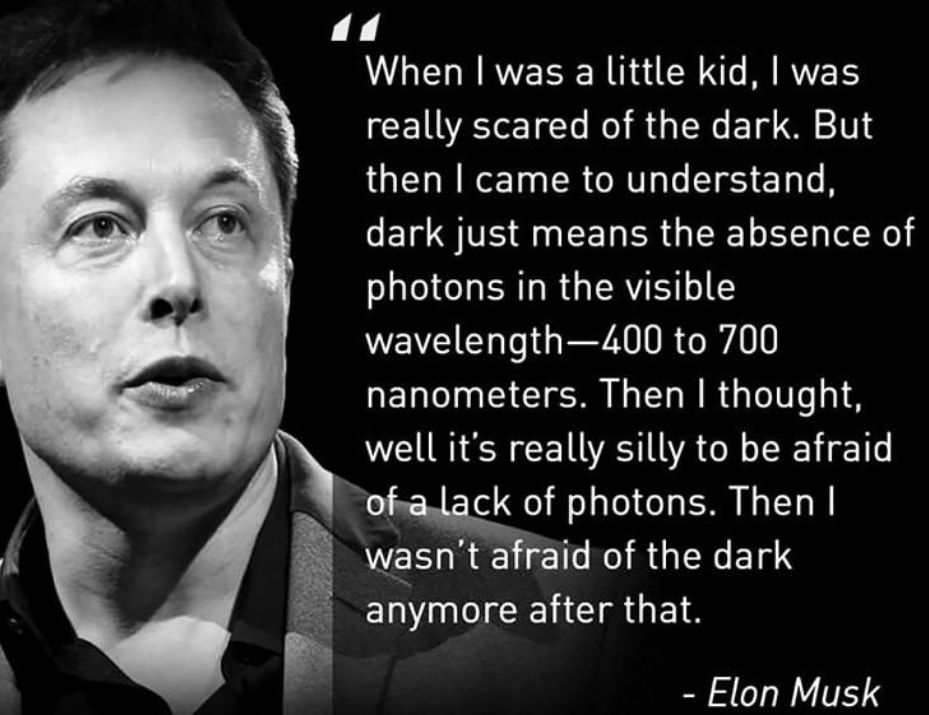 Elon is the grass right now, too.  He has all the ‘powers that be’ working against him.  You see although Elon is a very wealthy genius, he has morals.

Tesla Motors announced that it has paid off the entire loan awarded to the company by the Department of Energy in 2010. In addition to payments made in 2012 and Q1 2013, today’s wire of almost half a billion dollars ($451.8M) repays the full loan facility with interest. Following this payment, Tesla will be the only American car company to have fully repaid the government.

For the first seven years since its founding in 2003, Tesla was funded entirely with private funds, led by Elon Musk. Tesla brought its Roadster sports car to market with a 30% gross margin, designed electric powertrains for Daimler (Mercedes) and had done preliminary design of the Model S all before receiving a government loan.

In 2010, Tesla was awarded a milestone-based loan, requiring matching private capital obtained via public offering, by the DOE as part of the Advanced Technology Vehicle Manufacturing program. This program was signed into law by President Bush in 2008 and then awarded under the Obama administration in the years that followed. This program is often confused with the financial bailouts provided to the then bankrupt GM and Chrysler, who were ineligible for the ATVM program, because a requirement of that program was good financial health.

The loan payment was made today using a portion of the approximately $1 billion in funds raised in last week’s concurrent offerings of common stock and convertible senior notes. Elon Musk, Tesla’s Chief Executive Officer and cofounder, purchased $100 million of common equity, the least secure portion of the offering. “I would like to thank the Department of Energy and the members of Congress and their staffs that worked hard to create the ATVM program, and particularly the American taxpayer from whom these funds originate,” said Elon Musk. “I hope we did you proud.”

At this moment in time, Elon is under attack simply for trying to warn the world about AI Intelligence.  He praised humans in his factory over AI. He went to Congress to ask them to slow down on AI development, he talked to President Obama, and he was shunned and ignored.  He got high on the ‘Joe Rogan Show,’ and he has been mocked for that appearance. Why?

See also  I’m not Anti Vax, I’m Pro Vax. But What if This Experimental Covid Shot is Killing People? Don’t Americans Have a Right to Know?

He was honest and open – he did not hold back.  He was empathetic and compassionate about what the future holds for humanity if we stay the path we are on, and it was not good.

He wants to colonize Mars, and President Trump has been working with him in his Space X program.  President Trump understands that the United States must move forward in space to protect the future of all Americans now.

Back to Hurricane Florence – what a monster – so perfectly formed – so huge – the size of the state of North Carolina – my state.  I live in the mountains of NC, but it is going to pay me a visit, too. I feel as if I am under attack, so I wanted to understand what it is I fear – just like Elon Musk did.  Research and you will find.

How much power exists in the world today which can go up against God and Nature?  Can man copy God? Of course, he can, and he is. AI Intelligence will challenge and actually move ahead of human intelligence, but does that mean it will be ‘divine’ in nature?

What exactly do I mean by ‘divine?’

a : of, relating to, or proceeding directly from God (see 1god 1) or a god (see 1god 2) divine inspiration divine love praying for divine intervention

b : being a deity the divine Savior a divine ruler

a : supremely good : superb The meal was just divine.

I mean created by God – the one and only Creator – the Creator of all that is.  AI Intelligence is created by man – not God. Elon says AI will merge with humans, and that is most likely what humans will choose.  This is what the ‘powers that be’ wish for humanity – not divinity from God – divinity from them, but that is not divinity – it is enslavement.

Do humans have the capability to control the weather?  The technology is covered under US Patent 4,686,605 on the “Method and Apparatus for Altering a Region in the Earth’s Atmosphere, Ionosphere, and/or Magnetosphere.”

The same people who preach “climate change” are the same people who seek to destroy the divine from God.  Of course, God will never cease to be or to lose divine power, but when humanity was created we were given free will.  Look at what we have done with it.

Most of us have heard of Weather Control devices called HAARP and the GWEN towers, but just how valid is this information?   Some sources now believe that American and Russian scientists can and do control our weather, but how can this be taken seriously by the average person?

The New World Order’s favorite topic of conversation is ‘Global Warming,’ and they constantly warn that more terrible things are going to happen unless we change our lifestyle dramatically. What they do not say is that the lifestyle change they expect humanity to make is the elimination of our entire Industrial Civilization.

A United Nations’ Treaty exists to prohibit member states from using Weather Weapons on each other. Why would this Treaty exist if the capability does not exist?

Weather modification, particularly hostile weather warfare, was addressed by the “United Nations General Assembly Resolution 31/72, TIAS 9614 Convention[22] on the Prohibition of Military or Any Other Hostile Use of Environmental Modification Techniques.” The Convention was signed in Geneva on May 18, 1977; entered into force on October 5, 1978; ratified by U.S. President Jimmy Carter on December 13, 1979; and the U.S. ratification deposited at New York January 17, 1980.[23]

[1] Weather modification can also have the goal of preventing damaging weather, such as hail or hurricanes, from occurring; or of provoking damaging weather against the enemy, as a tactic of military or economic warfare like Operation Popeye, where clouds were seeded to prolong the monsoon in Vietnam. Weather modification in warfare has been banned by the United Nations.

So you see, weather modification was actually used in the Vietnam War to prolong the monsoon in Vietnam.

“Operation Popeye (Project Controlled Weather Popeye / Motorpool / Intermediary-Compatriot) was a highly classified weather modification program in Southeast Asia during 1967–1972. The cloud seeding operation during the Vietnam War ran from March 20, 1967 until July 5, 1972 in an attempt to extend the monsoon season, specifically over areas of the Ho Chi Minh Trail. The operation was used to induce rain and extend the East Asian Monsoon season in support of U.S. government efforts related to the War in Southeast Asia.

The former U.S. Secretary of Defense, Robert S. McNamara, was aware that there might be objections raised by the international scientific community but said in a memo to the president that such objections had not in the past been a basis for prevention of military activities considered to be in the interests of U.S. national security.

The chemical weather modification program was conducted from Thailand over Cambodia, Laos, and Vietnam and allegedly sponsored by Secretary of State Henry Kissinger and CIA without the authorization of then Secretary of Defense Melvin Laird who had categorically denied to Congress that a program for modification of the weather for use as a tactical weapon even existed.[1]

Operation Popeye’s goal was to increase rainfall in carefully selected areas to deny the Vietnamese enemy, namely military supply trucks, the use of roads by:[4]

So you see, mankind has the technology to control the weather, so we honestly do not know if any hurricane is manmade or divine.  We don’t know as the ‘grass’ if what we hear above us are the sounds of elephant’s approaching or man’s war machines. That is really sad, and I will continue to wonder about Hurricane Florence as it takes lives and puts fear into the hearts of man – including mine. 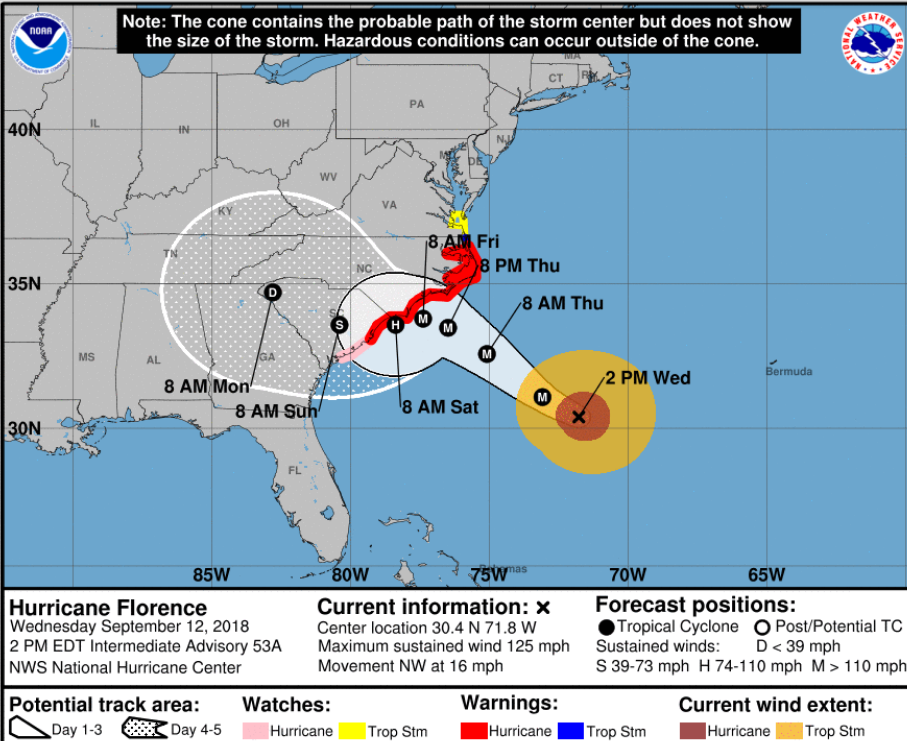