Anxiety is an occupational hazard, a fact of life, for professional traders. After all, even on good days, something is always going wrong, somewhere.

But when everything starts to go wrong at once, imaginations can run wild. Like now, when everywhere you look, something’s blowing up. In commodities, it’s the record plunge in oil. In equities, it’s six weeks of turbulence in the S&P 500. Debt markets have been rattled by the turmoil engulfing General Electric and PG&E. Bitcoin just plunged 13 percent. And Goldman Sachs, the storied investment bank, is having the worst week since 2016. 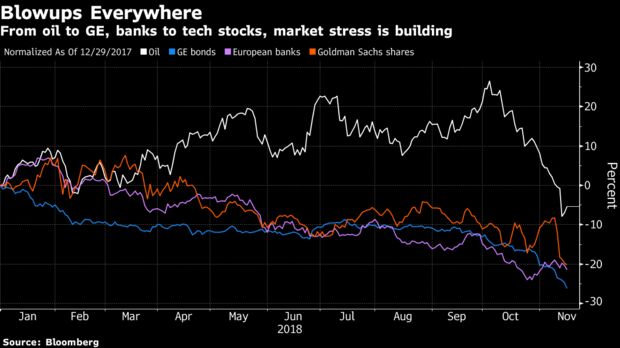 "The risk of contagion is understood. What’s not understood is where and how connected things are. Just about anything can create panic, create contagion, and it doesn’t have to be something that makes sense." t.co/vrH69cIPt5 pic.twitter.com/cIJwNjHSAi

Flashing signal of recession ahead:

Today’s global yield curve inversion looks just as concerning as the ones that preceded the last two market crashes!

"Incidentally, each company posted EPS either in-line or ahead of the street" – @TommyThornton

On a day when oil speculators unloaded lopsided long positions, it’s a good time to revisit the chart below (Commodities Index Vs. S&P 500).

Oil might have declined too much too soon and maybe it’s time to consider some long positions in precious metals. pic.twitter.com/RxKPCITpgw

Gov't & Fed are trying to prevent a market crash – amount of protection is huge here – pic.twitter.com/GB6dg4fKwp

“GE is a harbinger for what’s going to happen when large capital structures get downgraded. It’s going to be messy, and it’s going to be painful.” t.co/tkbYcrYmYX pic.twitter.com/HmQW72ZyLi

$GE 5yr CDS are exploding. I cant help but think that this is going to cause some big unintended consequences…$111bn of on balance sheet BBB credit and who knows what else off balance sheet. pic.twitter.com/GjdKVH1Exv

READ  Who Wouldn't Prepare Now as Prices Rise for Everything ?
READ  Something Strange is Happening in California…
818 views