You have probably heard that $15 trillion of bonds are trading with negative yields. That’s 25% of all sovereign bonds outstanding.

Lots of people are furious about this—but it’s no use getting mad at the market.

It makes sense to me, and to a few other people.

If you see something in the market that doesn’t make sense, it’s usually best to stay away, rather than picking a fight with it.

We’re not in uncharted territory here.

Let’s Do a Market Psychology Exercise 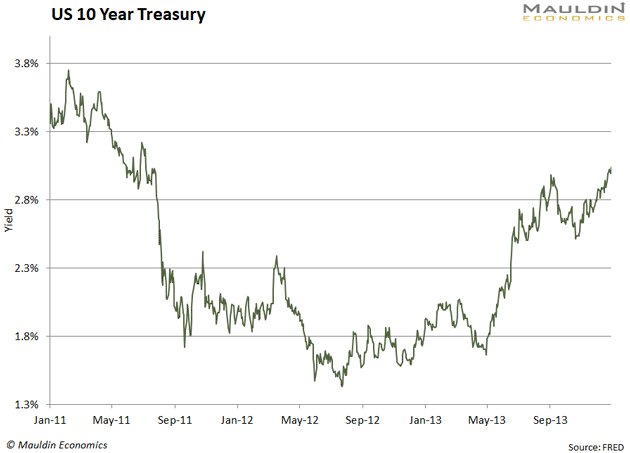 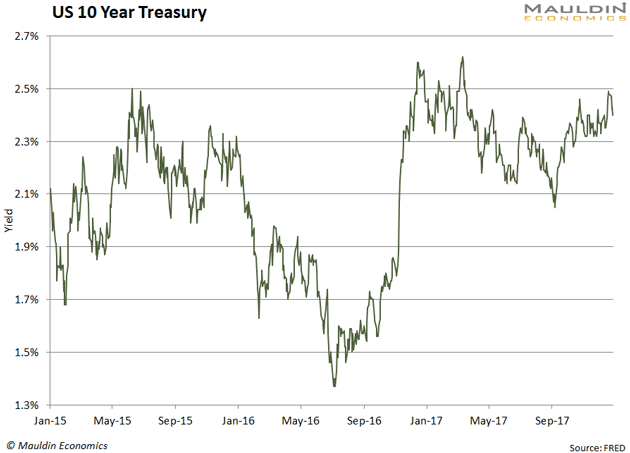 Both of those times (and I remember this quite clearly), people were bullish on bonds and said that yields were going lower. Instead, they rocketed higher.

They said that the deflation/disinflation that we were experiencing was unstoppable, and a whole bunch of other stuff, that turned out not to happen.

In 2016, I presented a short bond thesis at a conference, and I practically got hounded off the stage. Nobody remembers this, but everyone was really bullish on bonds back then.

It was actually kind of a weird situation. The organizers of the conference avoided me after that, like I was radioactive.

Now, practically nobody is bullish! Why is that? I suppose the inflation picture is markedly different—we have tariffs and there are wage pressures and such—but I don’t think that’s what this is about.

My thesis, which I have carried around for 20 years: When everyone believes something, it is usually wrong.

What does everyone believe right now? That negative yields are unsustainable.

Maybe that is true. Maybe not.

You can have a bubble in any asset class, from little stuffed animals to lines of computer code. Why not bonds?

The bitcoin bubble burst when there were more Coinbase accounts than Schwab accounts, and there was a bitcoin rapper in the New York Times. We don’t have any bond rappers yet, so I’d say the bull market has a ways to go.

George Soros always said that if he saw a bubble forming, he would get in there and try to make it bigger—which is pretty much the opposite of what everyone does.

What everyone does, is go on Twitter to complain about it.

I can’t do one scroll through Twitter without someone freaking out about negative interest rates. Turn on the internet and see.

But what if negative interest rates… are normal? What if they make sense?

Ask this question around certain people and they completely lose their minds. The last time I saw people get this indignant about a trade, it was… Beyond Meat. See how that turned out.

I have experience with this sentiment thing.

When something makes people angry, I have confidence that the trend in question will continue for a very long time. I think negative rates are not an aberration and could become a semi-permanent feature of finance.

When people start to believe in negative rates, they will probably come to an end.

Lehman Brothers was a “bond house.” It was really good at fixed income—not so good at equities. Though equities did pretty well toward the end.

It was kind of hard not to be exposed to bonds at Lehman, even if you did work in equities. If you recall, the Barclays bond indices that we have today used to be Lehman bond indices.

I got a lot of customer flow in the 20+ Year Treasury Bond ETF, TLT, and it was because Lehman had the index.

I also took six weeks of bond math when I joined the firm in the summer of 2001, and most of it stuck with me.

A lot has changed since then. Most of the trading activity in US Treasuries is electronic. Back then, it was all high-touch—carried out by actual humans.

A lot has remained the same. It’s still fundamentally the same market that it was 20 years ago.

There’s a lot more debt, but one thing that has remained constant is how difficult it is to trade off of supply—the idea that more bonds make rates go higher.

If you think things are stupid, they will probably get more stupid. You can put that on my tombstone.