In the year 1520, exactly 500 years ago, a German scholar named Johan Schoner completed a map of the world that was widely considered to be humanity’s most advanced understanding of geography at that time.

To us, Schoner’s map is pretty amusing. 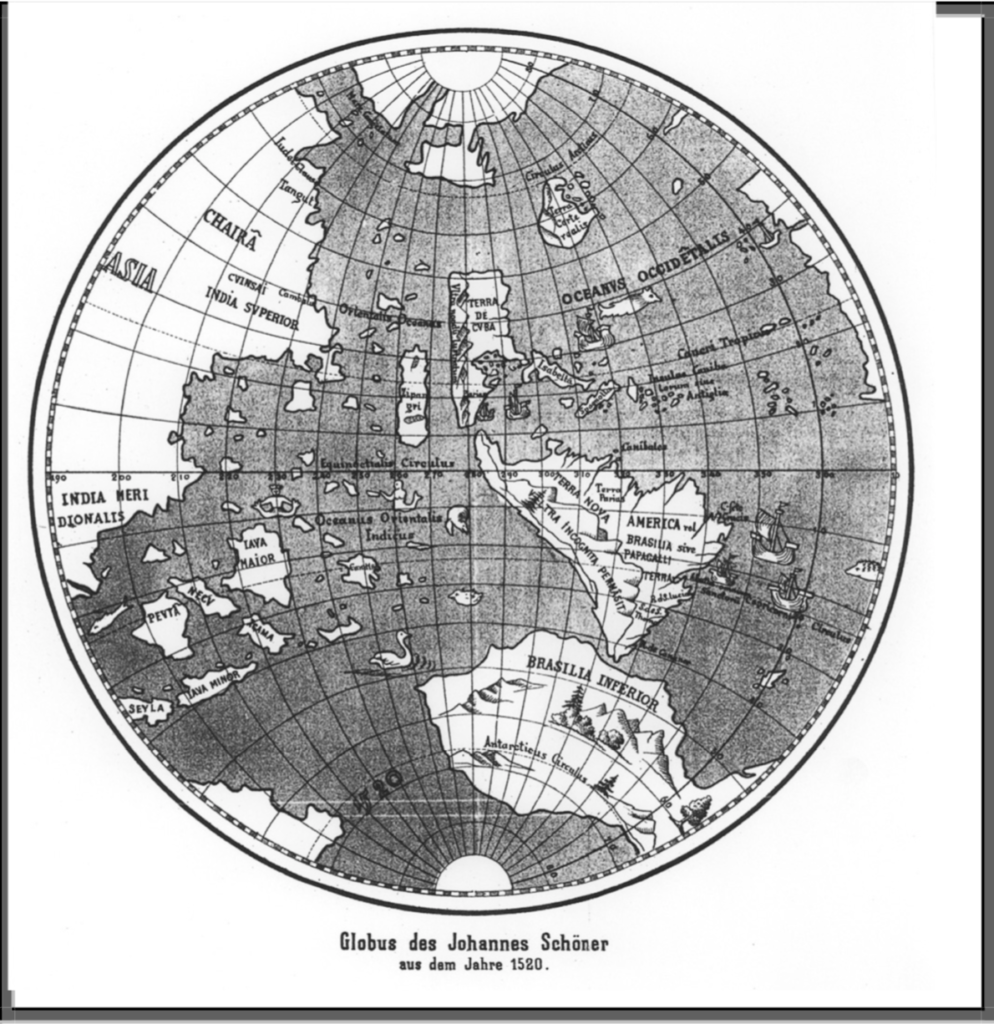 There’s scarcely any American continent. Instead he drew some amorphous blobs to mark Brazil and the ‘West Indies’. And there’s a very narrow body of water where the Pacific Ocean is supposed to be, separating Brazil and India.

Obviously we know this is totally wrong. But it was science’s best understanding of the world in 1520.

Then, in 1529, a Venetian named Giovanni Ramusio created an updated map based on the various explorations and discoveries throughout the 1520s.

Ramusio’s map shows the eastern coastline of North and South America, from Newfoundland to the tip of Argentina, and the west coast from Peru through Mexico, with incredible precision and accuracy.

Even by today’s standards, Ramusio’s map looks right. You can see the outline of Florida and North Carolina, the prominence of Brazil, the Gulf of Mexico, etc. almost to the same standard as a modern day map in 2020.

The difference between the two maps is extraordinary. In less than a decade, humanity’s knowledge of the world grew from an almost ‘Dark Ages’ mentality, to that of our modern world.

Their world literally became unrecognizable in less than a decade.

And this newfound scientific understanding ushered in a new era of commerce and wealth that had never been seen before.

It’s amazing when you think about it– how quickly the world can radically change… sometimes for better, sometimes for worse. We’ve seen plenty of examples in our own lifetimes.

In 1995 hardly anyone had even heard of the Internet. By 2005 it became so ubiquitous that we couldn’t imagine our lives without it.

At the start of 2007, no one had ever seen a touch-screen smart phone– Steve Jobs would unveil the first ever iPhone in January of that year.

And in less than a decade, our entire species has become completely zombified, swiping and scrolling our lives away while we walk, eat, and drive without ever looking up.

Just like the world maps in the 1520s, each of these trends represents a radical shift in the way we live, work, and engage with one another.

We’re living through another one right now… a powerful, dangerous social trend that’s being driven by anger and ignorance.

Think about it: 5 years ago around this time, things still felt pretty normal.

There was always political bickering and ideological conflict… but discourse was pretty civil. No one advocated for violence or called someone else a racist simply for having a different opinion.

Then all of a sudden, in late 2015, people started becoming completely unglued.

At first the madness was isolated– ultra-liberal universities, pockets of social media. We saw crybully students in California and on the east coast physically blocking certain speakers from setting foot on campus– anyone whose opinions they found ‘offensive’.

Like most movements, this one started slowly… but quickly gathered momentum.

Suddenly it became acceptable to expect everyone else to conform to your whiny sensitivities.

Terms like “safe space” entered the lexicon, and ‘social justice warriors’’ started demanding that we avoid using certain everyday words and pronouns to ensure that no one would be offended.

At the same time, socialists came out of hiding and quickly became mainstream. Some of the most popular politicians in the world now are card-carrying socialists.

Bernie Sanders is now the leading contender of a major party to become President of the United States. And a number of recent polls (CBS/YouGov) show Sanders winning the national election in November.

These people despise wealth. They hate profit. They’re mistrustful of private property. They believe that many private industries should be owned and controlled by the government.

Five years after it all started, these movements– social, economic, etc. have all merged together… and become violent.

Thugs now roam the streets of major cities, physically assaulting anyone they deem an enemy of their movement.

It’s ironic that these criminals call themselves ‘anti-fascists’ or ‘antifa’ given how similar their tactics are to Hitler’s ‘Brownshirts’ in 1920s Germany.

At one recent protest in California, a conservative politician was threatened by an antifa thug who said, “I just want you dead,” and “You’re racist… I can tell by looking at you.”

Protestors, meanwhile, held up signs like “Can’t have capitalism without racism!”

This is now considered acceptable, mainstream thinking– and not just in the Land of the Free. It’s all over the world.

This trend is a major force, like a runaway freight train. And every day they’re more emboldened, so it’s picking up speed.

One might simply hope that it all goes away… that, someday soon, people come to their senses and sanity is restored.

But as we used to say in the military, hope is not a course of action. And given a broader view of history, it’s unlikely that this trend goes gentle into that good night. In fact it’s far more likely to accelerate.

And just like other major trends, this one also stands to fundamentally transform the way we live, work, and do business.

Think about it– this movement, which grows stronger by the day, wants to seize private property, nationalize entire industries, raise taxes to sky-high levels, bankrupt the Treasury with unaffordable entitlements, label all white males as ‘racist,’ and physically assault intellectual dissenters.

It’s fair to say this -might- have a bit of an impact.

Never forget that we’re talking about people who are irrational and prone to violence.

So, if you haven’t already, I’d encourage you to start thinking about a Plan B.