Crude oil is a fossil fuel derived from marine plants and animals that died millions of years ago, before the dinosaurs. In its liquid form, crude oil can be found underground in reservoirs, sedimentary rocks, and tar sands.

Crude oil has been used to produce petroleum products such as gasoline, waxes, and plastics. It has also been heavily used in manufacturing, industrialization, and transportation. Since crude oil is found in certain geological areas, some countries are more likely than others to be sitting on large oil reserves. Our new visualization shows how much oil is in each country’s reserves. Oil reserves are measured in Gbbl (billion barrels). 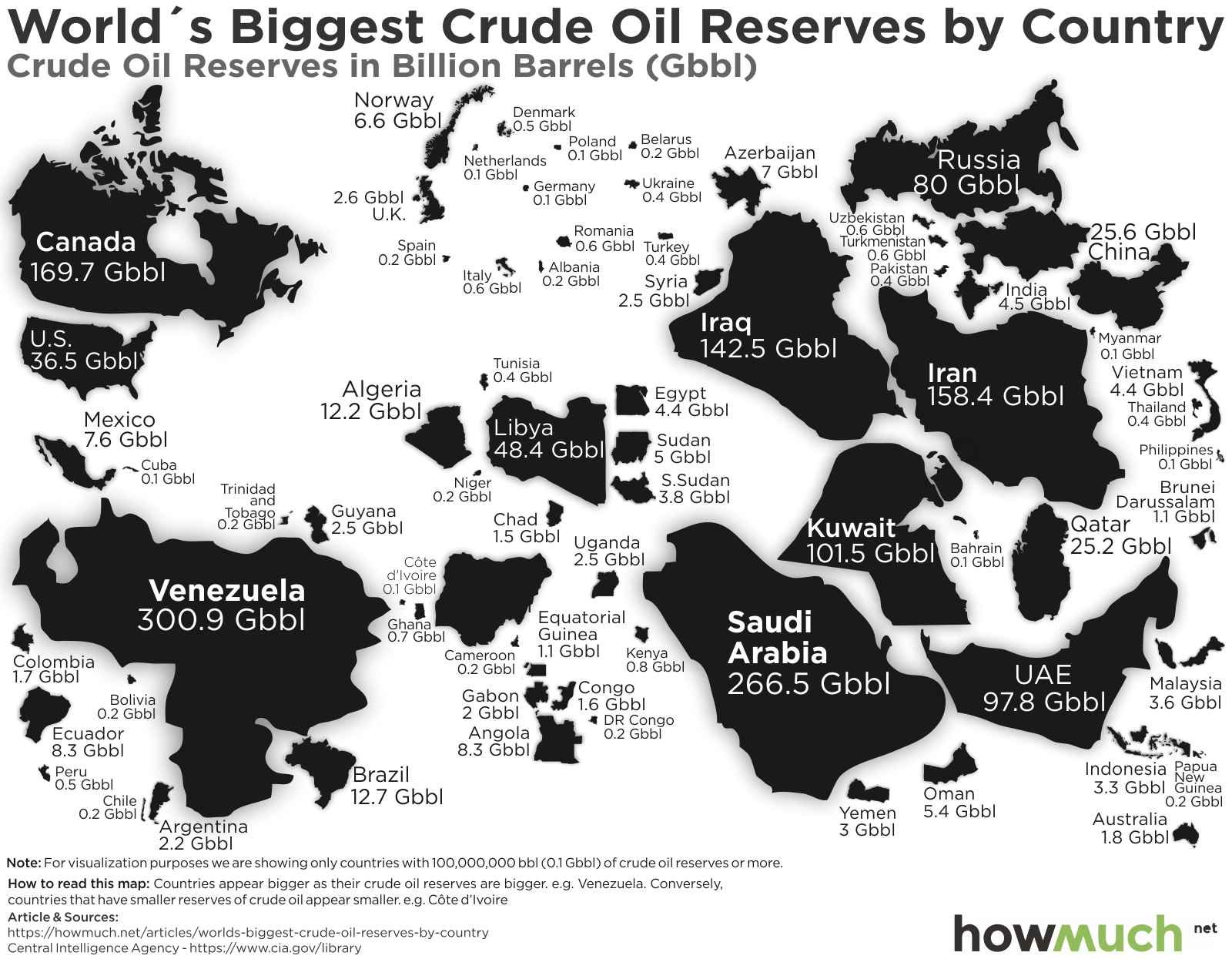 This data comes from the CIA Factbook. We used the West Texas Intermediate (WTI) price to value the known reserves. WTI is used as a benchmark to set the crude price on the market.

READ  Uranium market update, one of the biggest catalysts to date is about to be in place.

About half of the countries in the top ten list are located in the Middle East/North Africa region.  Six of these countries–Venezuela, Saudi Arabia, Iran, Iraq, Kuwait, and Libya–are members of OPEC (Organization of Petroleum Exporting Countries). Interestingly, there is no clear correlation between the country’s size and its amount of oil reserves. For example, Kuwait, which has a landmass of 17,818 sq km, has 101.5 Gbbl in oil reserves, whereas Russia, which has a landmass almost ten times larger, only has 80 Gbbl in oil reserves.

READ  HUGE VICTORY in "de-Californiazation" of Texas. Ballot referendum which bans skid row style encampments and "tent cities" in Austin passes in a landslide, in rebuke to Dem mayor.

While the products created with crude oil can make life and work easier, the costs to wildlife and the environment can be negative due to issues such as pollution and oil spills. The varied amounts of oil reserves in each country can also lead to an imbalance of energy imports and exports. Since the U.S. hosts only about 36.5 billion barrels of the world’s crude oil reserves and imports almost 8 million barrels per day, finding alternate forms of energy is more important than ever. Check out this visualization to see how some states are turning more and more to wind power.