Chart of the Night: Who says UST10Y has to stop at 3%? Bond market sees what's coming and its a whole lot of supply from Trump admin. pic.twitter.com/yaIcpieLZ3

The Daily History of the Debt Results

Historical returns from 02/01/2018 through 02/09/2018
The data for the total public debt outstanding is published each business day. If there is no debt value for the date(s) you requested, the value for the preceding business day will be displayed.

( Debt Held by the Public vs. Intragovernmental Holdings ) 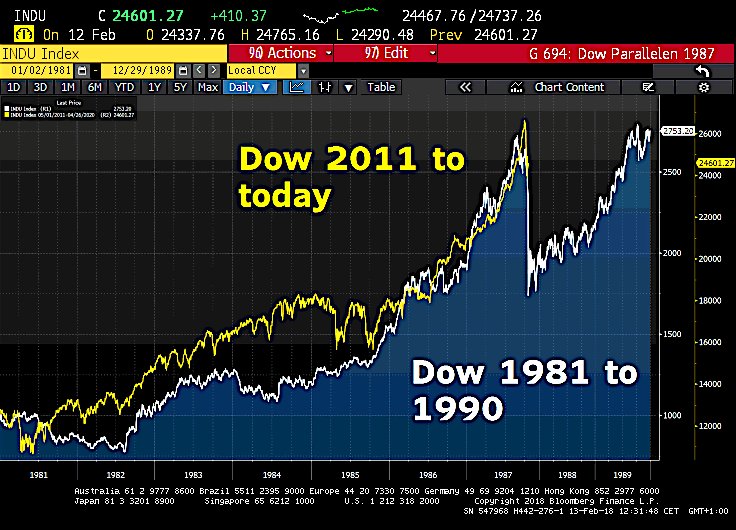 When interpreting sharp drops in stock prices and their impact, many will think back to 2008 and the market turbulence surrounding Lehman Brothers’ bankruptcy filing. But a better historical precedent for current conditions is Black Monday: October 19, 1987.

Black Monday was a big deal: the 22.6% price collapse is still the largest one-day percentage drop in the DJIA on record. The equivalent today would be – wait for it – 6,000 points on the Dow.

In addition, the 1987 crash occurred against the backdrop of monetary-policy tightening by the US Federal Reserve. Between January and October 1987, the Fed pushed up the effective federal funds rate by nearly 100 basis points, making it more expensive to borrow and purchase shares. In the run-up to October 2008, by contrast, interest rates fell sharply, reflecting a deteriorating economy. That is hardly the case now, of course, which makes 1987 the better analogy.

The 1987 crash also occurred in a period of dollar weakness. Late in the preceding week, Treasury Secretary James Baker made some remarks that were interpreted as a threat to devalue the dollar. Like current Treasury Secretary Steven Mnuchin at Davos this year, Baker could complain that his comments were taken out of context. But it is revealing that the sell-off on Black Monday began overseas, in countries likely to be adversely affected by a weak dollar, before spreading to the US.

Finally, algorithmic trading played a role. The algorithms in question, developed at the University of California, Berkeley, were known as “portfolio insurance.” Using computer modeling to optimize stock-to-cash ratios, portfolio insurance told investors to reduce the weight on stocks in falling markets as a way of limiting downside risk. These models thus encouraged investors to sell into a weak market, amplifying price swings.

President Trump Does Not Want You To Look At This Chart pic.twitter.com/jyBc4eCbkY

Deal volume in US is collapsing

nothing to see here pic.twitter.com/f5Kds2IFJW

1 thought on “Who says UST10Y has to stop at 3%? Barry Eichengreen sees striking similarities between recent sell-off and the 1987er crash.”