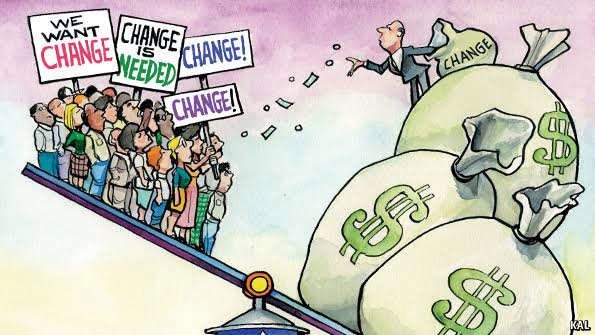 “Four weekends of mass protests in Paris and in towns and villages across France have hampered economic activity while hurting the country’s image with investors, the government said Monday…

He [Macron] did not mention changing course on the most business-friendly overhaul of the French labor market in decades. The omission was a signal to investors that, despite the recent chaos, Mr. Macron plans to stick with his strategy for re-energizing Europe’s third-largest economy by pursuing changes that had stalled for more than a decade…

His mostly unyielding attitude underscores the stakes for France as he eases business regulations to seed dynamism. His plans include altering the country’s strict labor code to encourage hiring, and making budget adjustments during his first year in office that hit low-income earners and retirees especially hard, even as he cut taxes for wealthy people.”

“The headline of an article [NY Times] on the protests in France told readers ‘Unrest in France hinders Macron’s push to revive economy.’

The policies in question include ending a wealth tax on the rich, cutting retirees’ Social Security benefits, and a series of measures designed to reduce the power of unions. While it is possible that Macron has taken these steps because he really does believe that this is the best to boost economic growth, it is also possible that he has taken these steps because he wants to give more money to rich people.   In this respect it is worth noting that Macron is a former investment banker. Therefore he is likely to be very rich, and to have rich friends.”

If a neoliberal agenda remains economically ascendant, and if a ruling elite continues to blind itself to the damage that it is causing to the broader public, over a long period of time through the enforcement of self-serving policies, even in the name of ‘growth,’ which is most often a rationale for a policy of ‘more for us,’ then we may very well expect what history suggests will happen.

It makes no difference what I or you want.  Don’t hide behind the caution of ‘be careful what you wish for’, especially as a cover to avoid the consequences for years of deception and corruption.   You may find yourself trying to silence the very voices that you will need to speak out for justice with reason and mercy, when history comes knocking on your door.

We need to be talking about what is happening and why, and where it will lead unless we engage in meaningful reform of a system that has become a wealth extraction machine for a privileged few.

But that is not likely to happen, since the powerful now control most of the means of discussion and its platforms.  And, sad to say, both political parties.  Don’t expect the utterly craven GOP, or even the self-satisfied, arrogant, corporate Democrats to stand for real reform.  They are creatures of the same rotten system, with their own fig leaves with which they hide themselves from their conscience.

Remember, it is 18 Democrats who are blocking the reaffirmation of ‘net neutrality.’   And not surprisingly they are wearing the feed bags of the corporate lobbyists.  They talk a very good game, but in the end, they serve the powerful interests who pay them.

And so we will continue rolling forward into what increasingly appears to be inevitable.

“People of privilege will always risk their complete destruction rather than surrender any material part of their advantage. Intellectual myopia, often called stupidity, is no doubt a reason. But the privileged also feel that their privileges, however egregious they may seem to others, are a solemn, basic, God-given right. The sensitivity of the poor to injustice is a trivial thing compared with that of the rich.”

“The problem of the last three decades is not the ‘vicissitudes of the marketplace,’ but rather deliberate actions by the government to redistribute income from the rest of us to the one percent. This pattern of government action shows up in all areas of government policy.”

“When the modern corporation acquires power over markets, power in the community, power over the state and power over belief, it is a political instrument, different in degree but not in kind from the state itself. To hold otherwise — to deny the political character of the modern corporation — is not merely to avoid the reality. It is to disguise the reality. The victims of that disguise are those we instruct in error.”

Tsar Nicholas II:  I know what will make them happy. They’re children, and they need a Tsar! They need tradition. Not this! They’re the victims of agitators.  A Duma would make them bewildered and discontented. And don’t tell me about London and Berlin. God save us from the mess they’re in!

Count Witte:  I see. So they talk, pray, march, plead, petition and what do they get?  Cossacks, prison, flogging, police, spies, and now, after today, they will be shot.  Is this God’s will?  Are these His methods?  Make war on your own people?  How long do you think they’re going to stand there and let you shoot them?   YOU ask ME who’s responsible?  YOU ask?