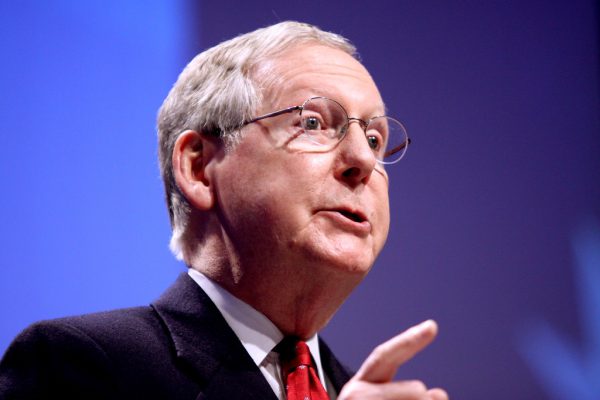 Mitch McConnell really wanted to convict Donald Trump and ban him from ever running for office again, but he was forced to back off.  In fact, he just voted for a motion that declared that convicting Trump at this point would be unconstitutional.  That represents a stunning reversal by McConnell, because earlier this month he was telling other Republicans that he wanted Trump gone.  Putting the pieces together, it appears that McConnell really did try to get to 67 votes so that Trump would be convicted, but political reality forced him to back down in a major way.  Now a weakened McConnell will try to move forward as the minority leader in the Senate, and the future of his political career is very much in doubt.

Once the riot at the U.S. Capitol happened on January 6th, McConnell decided that he was done with Trump and never wanted to speak to him again…

Senate Majority Leader Mitch McConnell has said he never wants to speak to President Donald Trump again following a violent insurrection at the US Capitol on Wednesday, The Washington Post reported.

But of course at that point they had already not spoken for quite some time.

According to McConnell, the last time the two spoke was all the way back on December 15th…

Senate Minority Leader Mitch McConnell (R-Ky.) said Tuesday that he hasn’t spoken to former President Trump since the middle of December, confirming news reports that the Senate GOP leader has cut off personal contact with the former president.

“The last time I spoke with him was the day after I declared that Biden had obviously won the election after the Electoral College [voted on] Dec. 14. It would have been Dec. 15,” McConnell told reporters.

Not content to keep his feud with Trump private, McConnell took it to the floor of the U.S. House of Representatives.

When McConnell delivered a speech in which he directly blamed the chaos at the Capitol on Trump, it made headlines all over the nation…

“The mob was fed lies,” McConnell told the chamber, which two weeks earlier had been evacuated as rioters invaded the building. “They were provoked by the president and other powerful people.”

Once it became clear that the House was going to impeach Trump, rumors were running rampant that McConnell was going to back a move to convict Trump in the Senate.

Senator Mitch McConnell of Kentucky, the Republican leader, has told associates that he believes President Trump committed impeachable offenses and that he is pleased that Democrats are moving to impeach him, believing that it will make it easier to purge him from the party, according to people familiar with his thinking.

The lobbying started in the House after the January 6 attack on the Capitol and in the days leading up to impeachment. But it’s now more focused on Sen. Mitch McConnell, the powerful minority leader who has signaled he may support convicting Trump.

So why did Mitch McConnell change his mind so dramatically?

There are three main reasons.

First of all, it became clear that there wouldn’t be a way to get to 67 votes.  As I warned yesterday, that would probably be enough to force McConnell and his allies to back down.

Voting to convict Trump without succeeding would be political suicide for McConnell and his allies and they know it.

Secondly, Trump was threatening to start his own political party if he was convicted.

The “Patriot Party” would have split the votes of conservatives in every state, and it would have made it absolutely impossible for Republicans to take back control of the House or the Senate in 2022.

In fact, splitting conservatives between the Republican Party and the Patriot Party would have ensured one party rule in Washington for the foreseeable future.

As much as McConnell would like to get rid of Trump permanently, regaining the majority in the Senate is much more important to him.

Thirdly, other Republicans in the Senate were threatening to boot McConnell from his position as minority leader if he voted to convict Trump…

“No, no, no,” Sen. Ron Johnson, a Wisconsin Republican and Trump ally, told CNN when asked if he could support McConnell if he voted to convict Trump, calling such a vote a “dangerous precedent” and adding: “I don’t even think we should be having a trial.”

McConnell is a political survivor, and he could see the writing on the wall.

So he backed off.

But if he could figure out a way to get rid of Trump without any consequences, he would pull the trigger in a nanosecond.

Unfortunately for McConnell, now that everyone knows what he tried to do, he has been greatly weakened politically.

He may survive for a while, but the days remaining in his political career are definitely numbered.

If the Republicans are not able to regain control of the Senate in 2022, I have a feeling that Senate Republicans may decide that it is time for a new standard bearer.

Of course a lot could still happen between now and then, and my regular readers already know that I am not optimistic about America’s future at all.

Our country is literally falling apart all around us, and decades of incredibly foolish decisions by our leaders are now catching up with us in a major way.