Americans celebrated their independence for the 242nd time this week. The annual celebration on the 4th of July is often accompanied by national pride, remembrance of the Founding Fathers and talk of individual liberty. But what really motivated the patriots of the late 1700’s to take the monumental risk of going to war with the British Empire?

If you grew up in the US public school system like I did, you were likely taught only a miniscule portion of the truth. Young kids are taught that the reason for the war was the 1765 Stamp Act that was imposed on the colonists. This law required colonists to pay a tax for every piece of printed paper they purchased. It applied to legal documents, licenses, newspapers and even playing cards. Even though the tax was very small, the colonists didn’t like the precedent it set (taxation without representation). But did it really anger the colonists enough to go to war?

A deeper analysis of the time period leading up to the American Revolution reveals other potential triggers for the war. For example, in the Declaration of Independence, the founders complain about King George stifling the flow of immigration to the colonies. Bigger populations usually mean higher economic output and an all-around more dynamic society. The founders were angry that they weren’t allowed to grow their population.

Another reason the colonists were angry with Britain (as stated in the Declaration of Independence) was King George’s efforts to cut the colonies off from trade with the rest of the world. This caused even more economic turmoil in the American colonies. However, there was an act by the British elite far more damaging to the colonies.

The American Revolution was fought over several compounding economic factors, but the fight over the issuance of currency was the main cause of war. Benjamin Franklin said it himself in the following quote: 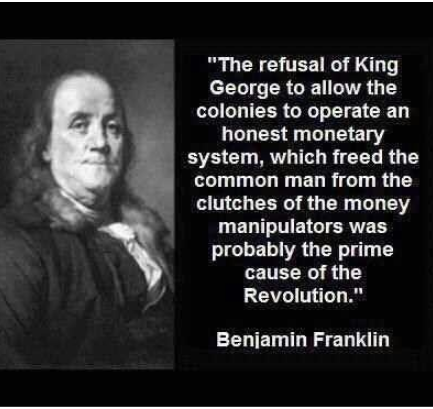 So, why aren’t we taught about the American Revolution being a revolt against British banks? Probably because we face the same tyrannical rule today. The Federal Reserve is the main money manipulator in the modern era. The Fed has slowly robbed this country of its purchasing power for over 100 years. But they don’t want you to know that. It’s best for them if you think the revolution was simply over the “no taxation without representation” principle.

Banking institutions have been the scourge of civilizations for thousands of years. The Founding Fathers were smart enough to recognize this, and brave enough to fight back. Will the tyranny of the Federal Reserve be recognized by a group of brave citizens in the modern era? For the sake of all that we celebrate on Independence Day, let’s hope so.