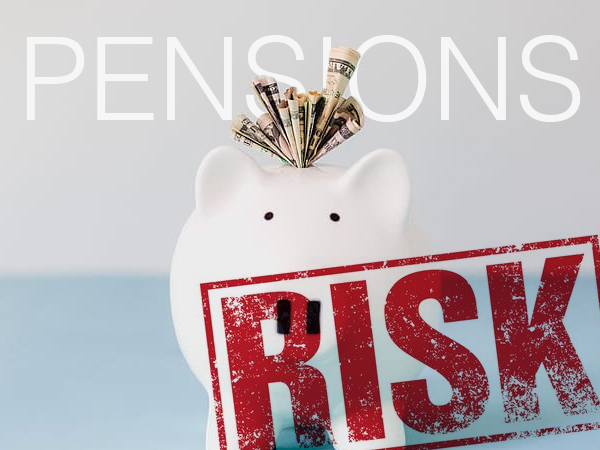 The bull market in stocks over the last decade hasn’t helped public pensions much. Officially, they acquired $8.8 trillion in liabilities, yet they remain 48% underfunded.

You can see the dramatically-widening gap between assets and liabilities on the graph below, which shows the latest available data from PEW: 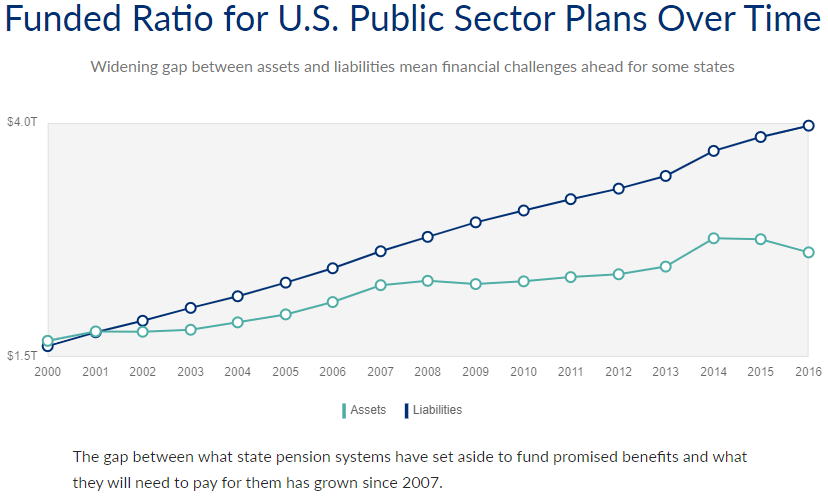 Even with the support of a bull market that has delivered record household wealth, a recent Barron’s piece delivered more bad news about public pensions (emphasis ours):

Standard & Poor’s says the median assumed return of state retirement funds is 7.25%. But according to Wilshire Trust Universe Comparison Service, the median public defined-pension plan’s return was 6.79% as of June 30, down from 8.40% a year earlier.

With the lack of returns thus far, public pension programs won’t have much choice but to consider moving into more risky investments to make up for their losses, with the Barron’s piece noting, “Private equity and emerging market stocks are forecast to return over 8%, but with correspondingly higher risk.”

The problem is, this bull market may be on its last legs. Put another way, if you’re driving a jalopy, it’s pretty risky to floor the accelerator.

On top of a potential recession, public pensions are underfunded at a rate almost equal to half of their liabilities.

In the public sector alone, there have been a few desperate attempts to shore up the pension funding deficit. But so far, it seems like pensioners will end up footing the bill.

So that begs the question… are there any solutions?

One “Simple” Solution (And Why It May Not Work As Intended)

The public pension conundrum is complex. That might leave you thinking the solution to the problem wouldn’t be an easy one.

But to two controversial thinkers, Stephanie Pomboy and Harley Bassman, the solution is “simple.” Just print the money.

According to the Barron’s article that highlighted the controversial idea:

When the downturn eventually comes, the Fed will once again expand its balance sheet to repair the bursting of the bubble in asset values, notably corporate credit, to which pension funds are heavily exposed.

Their “simple” idea is based on a hotly-debated economic theory known as modern monetary theory (MMT). The basic idea behind MMT is this: the government leverages currency like a monopoly to control public economic outcomes.

In a separate article, Barron’s sums up MMT nicely:

Governments can do whatever is necessary to satisfy the “public purpose” as long as they maintain their authority over the populace. The U.S. government was able to run budget deficits worth more than 20% of gross domestic product during World War II without risking either inflation or its own creditworthiness—but it needed to use rationing, wage and price controls, and financial repression to do so.

In this case, the U.S. appears to be hoping the Fed will start expanding its balance sheet (by creating money), in an effort to reduce the risk pension funds would be exposed to if a recession starts.

Using a “simple solution” like creating money to solve a complex economic problem feels a lot like gambling, especially with retirees’ futures riding on the outcome.

Most retirees don’t have a backup plan to protect them if their pension payments are reduced, or if the public pension system starts to go under. (Corporate pension plans are at risk, too.)

And if the U.S. is heading into a recession, it will be much more challenging than it is today.

Don’t put your retirement at risk by hoping any “simple” solution will fix pension programs that are already on the verge of collapse. Instead, consider better ideas like diversification and seeking out a retirement plan that’s known for its security and reliability.