Barrels of ink have been spilled covering the geopolitical conflicts in the South China Sea over the past few years, with plenty of speculation over whether these diplomatic tensions could explode into genuine warfare as China pushes further and further into the territory. The disputed area includes both islands and maritime areas that are the subject of contentious claims on the part of Brunei, Taiwan, Indonesia, Malaysia, the Philippines, and Vietnam.  The main source of these tensions has arisen from China’s continued military presence in foreign waters and dubious claims to land and sea that belong to other sovereign nations. The reason? The usual: oil. Just last month, though overshadowed by the pandemic’s endless news cycle, the South China Sea burst back into headlines as the geopolitical tensions in the region heated up, in no small part thanks to U.S. involvement. An article by Asia Times, entitled “Oil and gas fueling South China Sea tensions” reports that “Vietnam’s crucial offshore energy industry is being squeezed as US-China tensions rise in the South China Sea.” 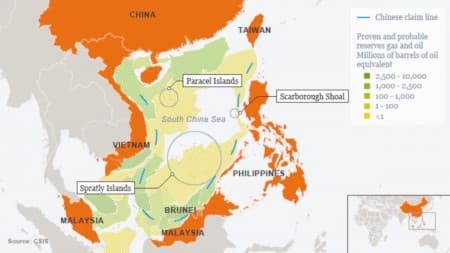 Not to be left out of any geopolitical skirmish worth its salt, Russia is also involved in the most recent conflict. According to Asia Times, “China is pressing for the termination of a Vietnamese offshore development with Rosneft Vietnam, a joint Russia-Vietnam venture that recently canceled its contract for London-based Noble Corp’s semi-submersible exploration rig.”

But while these oversteps and complex international tensions, which have only become exacerbated by the economic crisis spurred by the COVID-19 pandemic, have led to much speculation about an impending oil war, a foreign policy op-ed published by Lawfare this week says that these concerns are overblown.

While the confrontations spurred by China’s repeated interference with Vietnamese and Malaysian oil and natural gas exploration in the South China Sea “have prompted concerns that they could provoke a larger military conflict, especially as China exploits the unsteadiness created by the coronavirus to become more aggressive in its various international territorial disputes,” columnist Emily Meierding says that it’s highly unlikely that this will come to pass.

“Happily,” Meierding writes, “the historical record indicates that China and its neighbors are unlikely to escalate their energy sparring. Contrary to the overheated rhetoric, countries do not actually ‘take the oil,’ to use President Trump’s controversial and inaccurate phrase. Instead, my recent research demonstrates that countries avoid fighting for oil resources.”

And that historical record referenced by Meierding is as robust as it is lengthy. Not just in China, but around the world, resource-rich territories have been breeding grounds for geopolitical tensions virtually as long as there have been civilizations, a phenomenon which went on to explode along with the industrial revolution. “Between 1912 and 2010, countries fought 180 times over territories that contained—or were believed to contain—oil or natural gas resources,” Meierding writes, citing specific clashes and so-called oil wars from World War II to the Falklands War. “However, a closer look at these conflicts reveals that none merits the classic ‘oil war’ label. Although countries did fight over oil-endowed territories, they usually fought for other reasons, including aspirations to regional hegemony, domestic politics, national pride, or the contested territories’ other strategic, economic, or symbolic assets. Oil was an uncommon trigger for international confrontations and never caused major conflicts.”

Oil, in other words, is undoubtedly a factor in these conflicts, but rarely, if ever, the factor. Why? “In fact, classic oil wars are extraordinarily costly,” the op-ed argues. “A country that aims to seize foreign oil faces, first, the costs of invading another country. International aggression is destructive and expensive under the best of circumstances. It may also damage the oil infrastructure that a conqueror hopes to acquire. Next, if a conqueror plans to exploit oil resources over the long term, it faces the costs of occupying seized territory. As the United States has learned from its ‘endless wars,’ foreign occupation is extremely challenging, even for the world’s most powerful country.”

If this argument holds water, and if China has learned anything from this long historical record, or has any vested interest in self-preservation during this particularly vulnerable chapter in world history, the conflict in the South China Sea will remain just that–a series of skirmishes and tensions–and will not fester into the all-out war that looms in the headlines.