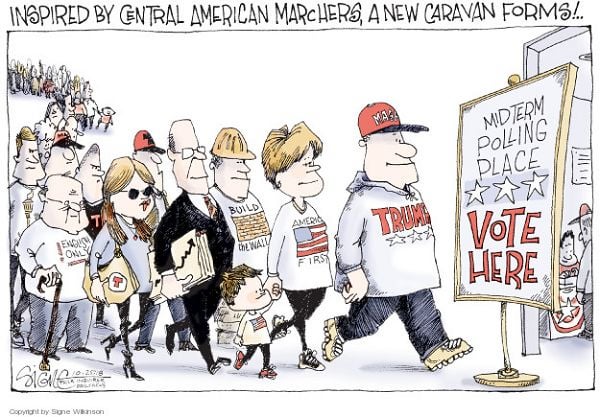 This is all about the midterms, just so you’re all aware. Don’t forget.

We know we are going to win.

Trumptards aren’t behind this.. Its the democrats trying to stir sh*t up!!

Coincidental this happens right before the midterms and the caravan! Just bad timing! Coincidental!

ANDREW MCCARTHY: The Pipe-Bombs Story: Another Example of Why No One Trusts the Media. “There is plenty of media commentary at the moment about incivility, in the form of incendiary rhetoric and actions. This is entirely appropriate. But I’m at a loss to understand how the climate is improved by spicing up reports with thinly veiled suggestions that President Trump may have triggered a series of potentially murderous attacks on political opponents. When Bernie Sanders supporter James Hodgkinson opened fire on the Republicans he targeted and nearly killed Representative Steve Scalise, I don’t recall much Times speculation about whether he could have been set him off by Democrats urging their supporters to get aggressive — ‘get in their face’; ‘if they bring a knife, we bring a gun’ — when dealing with political adversaries.”

READ  THE INDOCTRINATION ISN’T GOING AS WELL AS HOPED:

That’s different because shut up.

Flashback: Hillary Clinton Says Democrats Can’t Be Civil Until They’re Back in Power.

SURE. HE’LL DO IT AS SOON AS THE LEFT APOLOGIZES FOR THEIR WORDS INSTIGATING VIOLENCE, AND THE VIOLENCE THEY INSPIRED:  Schumer, Pelosi: Trump Bomb Condemnation ‘Hollow’ Until ‘He Reverses Statements That Condone Violence’.

ME TOO:  Done with all the Fake Bomb stuff.

Update: So Chris Hayes is saying the ISIS flag on those bombs was actually a … ‘Get Er Done’ sticker?

The STILL REPORT: The Red Tide Gets Harder To Hide!
Note: Report begins at 1:14.