Snap, which owns the vanishing messaging app and is developing cameras, climbed 44% on its first day of trading, closing at $24.48 after opening at $17. There was a huge enthusiasm about Snap among small investors generally, driven by the publicity the IPO produced and the extensive use of Snapchat.

Snap’s main product is the app by the name of Snapchat. It’s been the one of the hot trending social media app of the last 5 years. This app lets users send and receive photos, videos, and text messages. It include many unique features such as the timers for photos and videos, along with self-deleting message histories, letting users send content to friends that they otherwise would likely never upload onto something like Facebook, Instagram, or Twitter. But since we are here today talking about a company with a market cap north of $28 billion, it seems like that feature is quite popular among the masses.

“These are people that have pride of ownership, they love Snapchat, they use it everyday, and they want to own what they love,” Dan Schatt, a StockPile executive, told Benzinga, an investing website.

Despite all this, sentiment is very strongly against Snap. Many different authors told people to avoid the SNAP stock in a few days span of its going public. In the short term, that consensus avoid call was correct. SNAP stock initially tilted to the downside, falling from $24 to $20. However, that wouldn’t be the end of the story – the stock found its low, and has come roaring back over the past week: 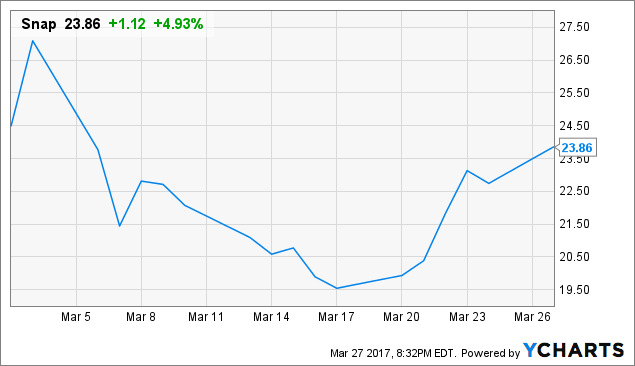 “Snap has a remarkably small float of publicly-trading stock at the moment. Only about 12% of Snap’s overall outstanding stock can trade on the stock exchange at present. This means that while Snap has its absurd $30 billion or whatever valuation, only a few billion dollars of stock can actually be purchased on the open market. This artificial scarcity of shares allows the stock to trade far over its actual market clearing price. Low-float IPOs have been popular as of late, leading to a common trend where these companies run up; often dramatically, in the short run. Then lock-up expirations finish, allowing insiders to sell a lot more stock. Once this happens, the artificial imbalance between supply and demand is lifted and the stock in question craters. Some recent examples of this are Twilio (NYSE:TWLO), GoPro (NASDAQ:GPRO), Acacia (NASDAQ:ACIA) and Shake Shack (NYSE:SHAK).” seekingalpha

In a nutshell, there are decent odds that Snap will go up, or at least sideways, in the short term. Shorting the stock, or buying puts, is probably not going to work out well, particularly given the steep cost of going short and high odds of a squeeze. When the conventional wisdom is all agreed on a stock being a dud, and yet it goes up anyways, as we’ve seen this past week, it suggests there’s a more complex market mechanism at work.