Because of its wide availability and exceptional conductivity, copper is found in everything from consumer products to automobiles to semiconductors. Last year global demand for the red metal stood at 23.6 million tons, and by 2027, it’s projected to reach just under 30 million tons, representing an average annual growth rate of about 2.6 percent.

This phenomenal growth is attributable not just to the rise of middle class consumers. It’s also thanks to our steady rotation into clean, renewable energy such as wind and solar—which is good news for copper demand going forward.

As I’ve shared with you before, renewables require many more times the amount of copper as traditional energy sources. A typical wind farm—those that blanket whole areas of West Texas, California and some other states—can contain as much as 15 million tons of the metal.

2018 Was a Record-Breaking Year for Renewables

Whether you’re a believer in renewable energy or not, the tipping point may have already occurred. Among the fastest growing jobs in the U.S. right now are wind turbine service technician and solar panel installer, for whatever that’s worth. And according to a report by Bloomberg New Energy Finance (BNEF), corporate purchasing of renewable energy more than doubled from 2017 to 2018. Globally, companies bought 13.4 gigawatts (GW) last year, compared to the previous record of 6.1 gigawatts in 2017. Over 63 percent of the purchasing activity occurred right here in the U.S. Facebook alone was responsible for consuming 2.6 GW of renewables, three times as much as the next biggest corporate energy buyer, AT&T.

The trend toward renewables is expected to accelerate at a white-knuckle pace for years to come. Take a look at the chart below, courtesy of McKinsey’s “Global Energy Perspective 2019.” Analysts believe that, by 2035, renewable energy will account for more than half of all power generation as its price falls below that of coal and gas-generated energy. Fifteen years after that, nearly three quarters of total energy consumed around the world will be derived from renewable means, chiefly wind and solar. 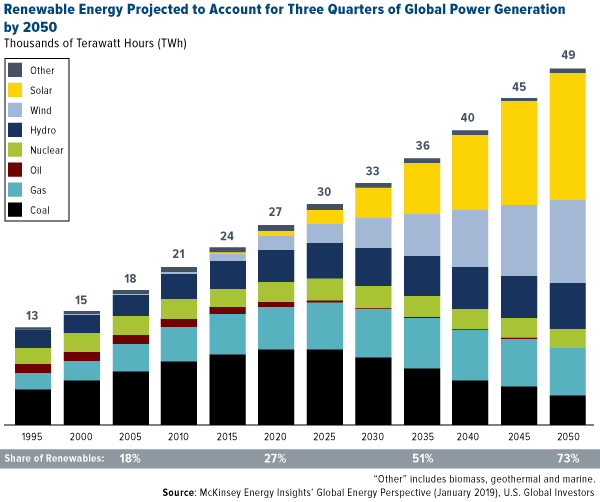 If this is compelling at all to you, now might be an excellent time to start participating. One of the best ways, I believe, is with exposure to high-quality, well-managed copper miners as well as funds that have a large position in copper mining.

And we haven’t even mentioned electric vehicles (EVs), which are notorious copper gobblers. As I’ve shared with you before, EVs consume between three and four times the amount of copper as traditional internal combustion engines.

China is leading the world in EV adoption and will likely continue to do so for some time. In the fourth quarter of last year, China was responsible for 60 percent of global EV sales, according to Bloomberg, which adds that the country holds half of all vehicle-charging infrastructure. By the end of last year, electric cars made up about 7 percent of total new vehicle sales in China, with a compound growth rate of 118 percent since 2011. In about a decade, the Asian country will account for nearly 40 percent of the global EV market, followed by Europe (26 percent) and the U.S. (20 percent), according to BNEF. Not only does China have national subsidies in place, but its carmakers are also incentivized to manufacture EVs thanks to the country’s “New Energy Vehicle” credit system. The system acts as an EV quota, requiring carmakers to generate credits through the sale of electric cars. According to BNEF, this is the “single most important piece of EV policy globally and is shaping automakers’ electrification plans.”

Adding to this acceleration is the fact that China has elevated the adoption of new “Phase 6” emissions standards under its anti-pollution “Blue Sky Defense” action plan. Just as we’re seeing in parts of Europe right now, China will soon begin banning the production of the most polluting diesel engines.

Many cities in China see the writing on the wall and have already enacted restrictions on gasoline-powered vehicle sales. In 2018, Shenzhen and Shanghai collectively led the world with more than 165,000 EV sales. That’s more than Norway and Germany combined.

With demand for EVs so high, it’s little wonder that China’s copper imports climbed to 479,000 tonnes in January, the second-highest on record.

Last week Morgan Stanley joined Citi and Goldman Sachs in making a bullish call on the metal. The investment bank projected a 14 percent upside for copper in 2019, based on a widening supply deficit and the likelihood of a resolution to the U.S.-China trade spat.

As for copper miners, Morgan Stanley upgraded Freeport-McMoRan, while Goldman Sachs recently upgraded Rio Tinto. Piyush Sood, lead analyst at Morgan Stanley, said in a note that Freeport’s “earnings sensitivity to copper is still the highest among its peers, and combined with its high trading liquidity, we believe it will emerge as the go-to large-cap stock for exposure to a copper price rally.” Shares of the Phoenix-based company’s stock jumped nearly 7 percent on the news last Wednesday.

Singapore-based DBS Bank also sees a copper shortage over the mid-term. Analysts expect supply to be in a deficit each year between now and at least 2022, when it could be at its widest since 2004.

“Copper is king for this electrification trend taking over the global economy,” Matt Gilli, CEO of Nevada Copper, told Reuters. “We see demand increasing steadily in the years ahead and, so far, supply is not keeping up.”

To meet surging demand, four U.S. copper projects are set to open by next year, the first to do so in decades, according to Reuters. And Ivanhoe Mines, founded by my friend Robert Friedland, is in the process of developing the Kamoa-Kakula copper deposit in the Democratic Republic of Congo, which Robert describes as the second-largest copper mine in the world.

“You’re going to need a telescope to see copper prices in 2021,” Robert told us when he visited our office last year.