Nearly a decade following the Fukushima Daiichi 2011 nuclear disaster, Japan is trying to reassess its energy prospects. One of the most energy dependent economies globally, nuclear energy has traditionally been the energy source that combines reliably low costs and zero carbon dioxide emissions. Fukushima, however, has shifted the previously positive public sentiment towards widespread protests demanding a full nuclear ban. Time has healed some wounds and has allowed to take stock of what Japan has on its hands yet most of the concluding observations could barely exhilarate Japanese policy makers. With no real alternative if Japan is to stick to its commitments of carbon neutrality, neutral energy is slowly making its way back into the nation’s life.  The Fukushima nuclear incident has resulted in a “lost nuclear decade” for Japan – before 2011, Tokyo was dreaming big about bringing nuclear energy’s share in the national electricity generation tally even higher, beyond 40% by 2020 and to 50% by 2030. Such plans were considered to be really ambitious, considering that in 2010 (i.e. the last “normal” year for nuclear generation in Japan) the share of nuclear power stood at 25%. On the back of the public outcry, further aggravated by the new 2012 regulatory requirements stipulated by Japan’s Nuclear Regulation Authority (NRA), nuclear went into a tailspin and zeroed out in 2014. Although Japan has been restarting some reactors from 2015 onwards (Sendai 1&2 in 2015, Takahama 3&4 in 2016, Genkai 3&4 and Ohi 3&4 in 2018), the share of nuclear is still at a meagre 6-7%, a fraction of where it was a decade ago.

Graph 1. Nuclear Energy in Japan’s Electricity Generation in 1990-2019 (in Terawatt-hours). 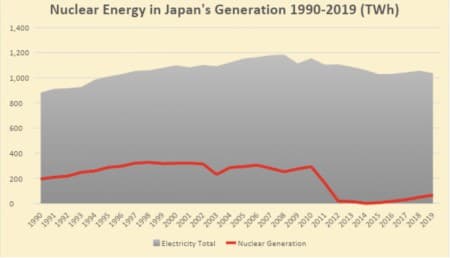 Japanese grid operators are now doing their utmost to bring unused capacities, primarily the ones which were on the verge of commissioning when the Fukushima nuclear disaster happened. Take, for instance, the Kashiwazaki-Kariwa nuclear plant, temporarily damaged and hence idled following a previous earthquake in 2007. Now it’s merely a couple of steps away from being restarted. TEPCO has filed for safety assessments of the Kashiwazaki-Kariwa units 6 and 7 way back in 2013 and by 2017 the Japanese Nuclear Regulatory Authority approved a preliminary report that both units conformed to national standards, all the while listing the additional safety measures that the reactor needed to have (seismic reinforcements, filtered venting systems, seawall). Reportedly TEPCO is expecting to be ready with these works this December, paving the way for the units’ restart.

Nuclear reactors that sustained significant damage in the 2011 Great East Japan Earthquake are also seeing their safety revamps validated, bringing them closer to the point of reopening. The Onagawa Nuclear Plant will most likely become the first nuclear object to come back from the deadly tsunami – the NRA safety inspection was carried out in February 2020 and the reactor restart already received the political support of all relevant constituencies. As with Kashiwazaki-Kariwa, the plant’s operator, Tohoku Electric Power, has outdone itself in making the nuclear plant as tsunami-proof as our current technological expertise can allow, including a 29-meter high coastal levee and a reactor fortification system.

The root cause of Japan’s willingness to go down the nuclear road again is fairly self-explanatory, profitability. If we are to revisit the case of the Kashiwazaki-Kariwa plant’s two units, according to TEPCO estimations the Japanese firm would increase its earnings by almost $1 billion per year if it restarts them. It needs to be pointed out that the missing volumes of electricity generation were met by increasing LNG imports which have increased quite significantly within the 2010-2012 timeframe, jumping from 96 BCm in 2010 to 120 BCm in 2012-2014. Although the slow restart of some nuclear capacities and the demand slump have carved down the erstwhile record highs, Japan’s LNG imports remain higher than they were before the Fukushima disaster. 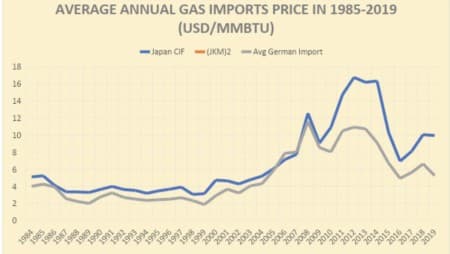 Up until 2011 the average gas price Japanese companies have paid for their LNG imports roughly corresponded to European levels (see Graph 2 for comparison with German import prices). The Fukushima disaster, however, has decoupled the two and sent Japanese LNG prices skyrocketing into double digits for most of the 2010s, all this of course borne by business and taxpayers. Thus, when one is to understand the state of mind with which Japanese authorities have taken the decision not to phase out nuclear power, it is against this background that the dilemma should be put. The ascent of Shinzo Abe to the top of Japan’s politics has coincided with a strategic reorientation towards nuclear power, labelling it the nation’s “most important energy source”.

Nuclear plants have been a landmark feature of Japan’s energy policy in the post-1973 era. Before that, when oil accounted for two-thirds of electricity generation despite the high rates of economic growth and industrial production, it depended on fossil fuel imports. Today, as immediate fears of Fukushima repeating itself again have subsided slightly, Japan is once again dependent on fossil fuels, this time natural gas being the main source. Of the 54 nuclear reactors available in the pre-Fukushima period, only 9 operate today (17 were assessed to be too obsolete to be retrofitted).

All this leads up to the million-dollar question – should Japan relaunch its nuclear drive? Its recurring earthquakes and tsunamis point in the opposite direction, however per-unit profitability of nuclear still surpasses any other energy source. The new government of Yoshihide Suga has vowed not to build new nuclear plants until 2050, concurrently maintaining that nuclear should compose 20-25% of Japan’s future electricity generation, i.e. tripling current nuclear output. As difficult it may seem to decide between one’s heart and their mind, Tokyo will need someone to take the brave step of authorizing further nuclear startups should the NRA find the reactors adequate, otherwise it is going to cost the taxpayer even more.

By Viktor Katona for Oilprice.com