The ECB held its monetary policy stance steady. Meanwhile, the U.S. fiscal deficit reached its all-time high. What does it all mean for the gold prices?

On Thursday, the members of the Governing Council of the ECB met together to undertake monetary policy decisions. They decided to leave the interest rates and the conditions of the quantitative easing unchanged. This lack of action was widely expected, so attention shifted to the fresh economic projections and the Lagarde’s press conference. Importantly, the ECB lifted its growth forecast for 2020 from -8.7 to ‘just’ -8.0 percent. With inflation projections almost unchanged, the recent monetary policy statement sounded a little bit more hawkish than the previous one.

However, the most important part was what Lagarde said during her press conference. Or, actually, what she did not say. First, she did not provide any clues about the expansion or extension of the monetary stimulus. Lack of any dovish hints is supportive for the euro and the price of gold – against the U.S. dollar.

Second, she did not say that the recent appreciation of the euro constituted a problem. Lagarde emphasized that the ECB is not targeting exchange rates as it is not a monetary policy tool. So, for the Governing Council, the recent euro’s rise was generally in line with economic fundamentals. Not surprisingly, after Lagarde’s comments that suggested lack of any aggressive measures in order to weaken the bloc’s common currency, traders took the euro higher. The appreciation of the euro against greenback is supportive for the gold prices which like the weakening dollar.

Hence, the latest ECB meeting strengthened the euro against the dollar, which should be welcomed by gold bulls. However, it would be too early that they open a bottle of champagne, as inflation in the eurozone has turned negative, falling from 0.4 percent in July to -0.2 in August, according to Eurostat’s flash estimate. With deflation in the euro area, the additional monetary measures are just a matter of time. Moreover, there is resurgence in coronavirus infection in many European countries, which may decrease investor and consumer confidence and hamper the economic recovery. In such circumstances, it is more than certain than Lagarde will ease her stance. It’s bad news for gold, as the divergence between the monetary policies in the U.S. and the eurozone will increase, supporting the U.S. dollar against the euro and gold. As one can see, the divergence in the Treasury yields for the United States and Germany has already bottomed out in April and stabilized somewhat since then. 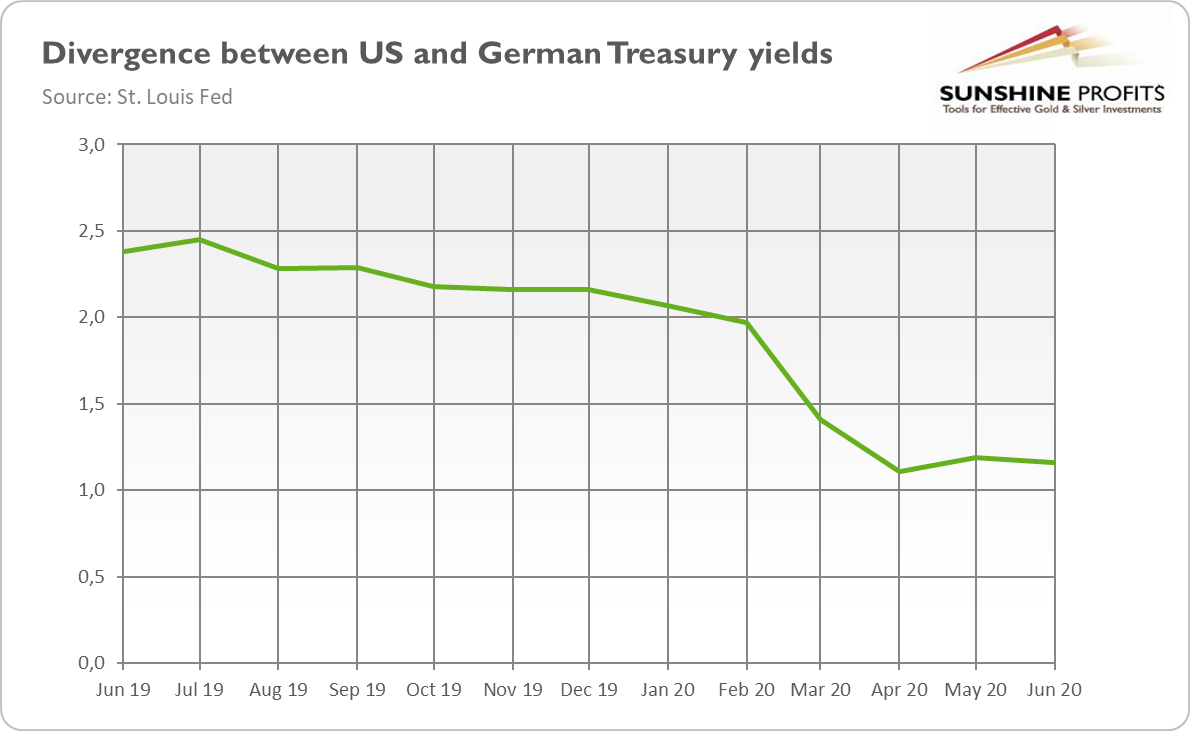 However, last week Treasury Department published an interesting report that could raise investors’ doubts about the strength of the U.S. dollar. It turned out that the U.S. federal budget deficit was above $3 trillion for the first 11 months of fiscal year of 2020, more than double the deficit for full 2019. And with one month to go, September, the fiscal deficit could go even higher, possibly to about $3.3 trillion. In August alone, the U.S. government created debt worth $200 million, as the chart below shows. 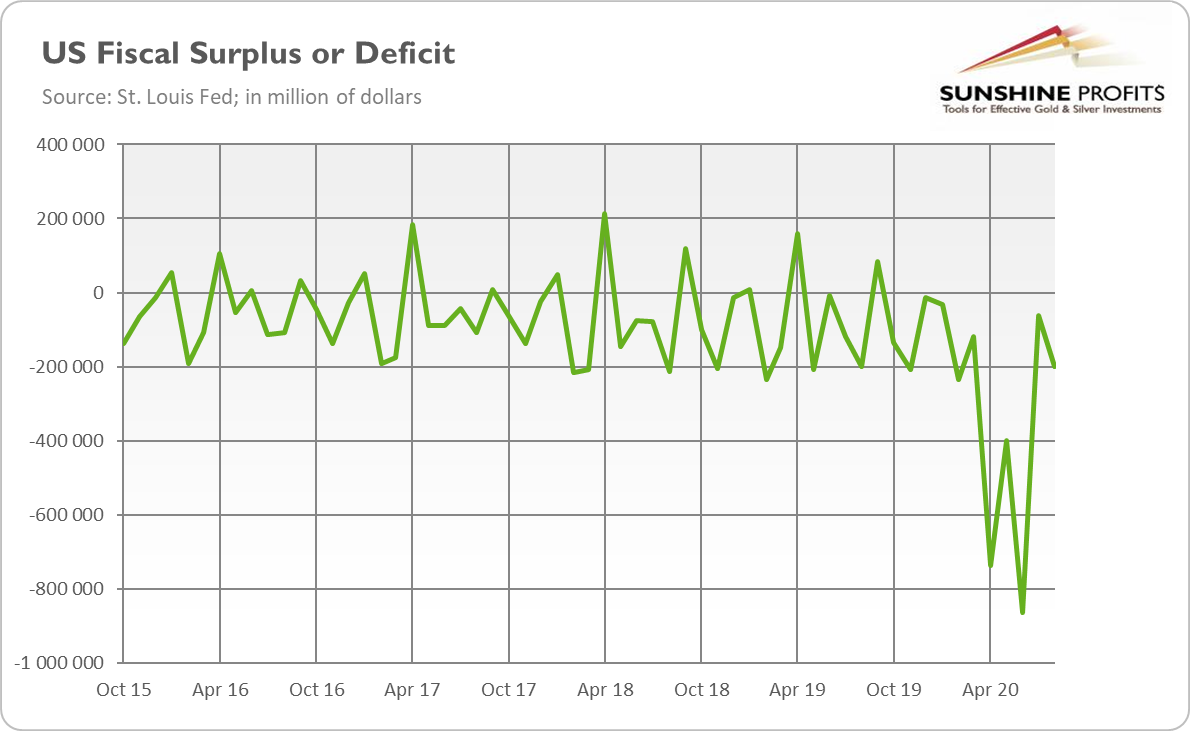 Curiously enough, the government’s interest cost to finance is down 10 percent this year, despite the enormous increase in federal debt. Long live low interest rates! Does anyone still have any doubts about the true motives of the ultra easy monetary policy? The very low interest rates do not help anyone but the government! As long as they are low, both Steven Mnuchin, Secretary of the Treasury, and gold are happy.