The concept of ‘retirement’, of enjoying decades of work-free leisure in your golden years, is a relatively new construct. It’s only been around for a few generations.

In fact, the current version of the relaxed, golfing/RV-touring/country club retirement lifestyle only came into being in the post-WW2 boom era — as Social Security, corporate & government pensions, cheap and plentiful energy, and extended lifespans made it possible for the masses.

But increasingly, it looks like the dream of retiring is fast falling out of reach for many of today’s Baby Boomers. Most will outlive their savings (if they have any at all).

And the retirement prospects look even worse for Generations X, the Millennials, and Gen Z.

While the US enjoyed a wave of unprecedented prosperity throughout the 20th century, the data clearly shows that halcyon era is ending.

Real wages (i.e., nominal $ earned divided by the inflation rate) for the average American worker have hardly budged since the mid-1960s: Yet the cost of living has changed dramatically over the same time period. Note how the rate of increase in the Consumer Price Index (CPI) started accelerating in the late ’60s and never looked back:

Squeezed between stagnant wages and a rising living costs, perhaps it should be little surprise that so many Americans are having difficulty finding anything left over to save for retirement.

We’ve written about this extensively in our past reports, such as Let’s Stop Fooling Ourselves: Americans Can’t Afford The Future and The Great Retirement Con. But as a way of driving the point home, here are some quick sobering stats from the National Institute On Retirement Security: 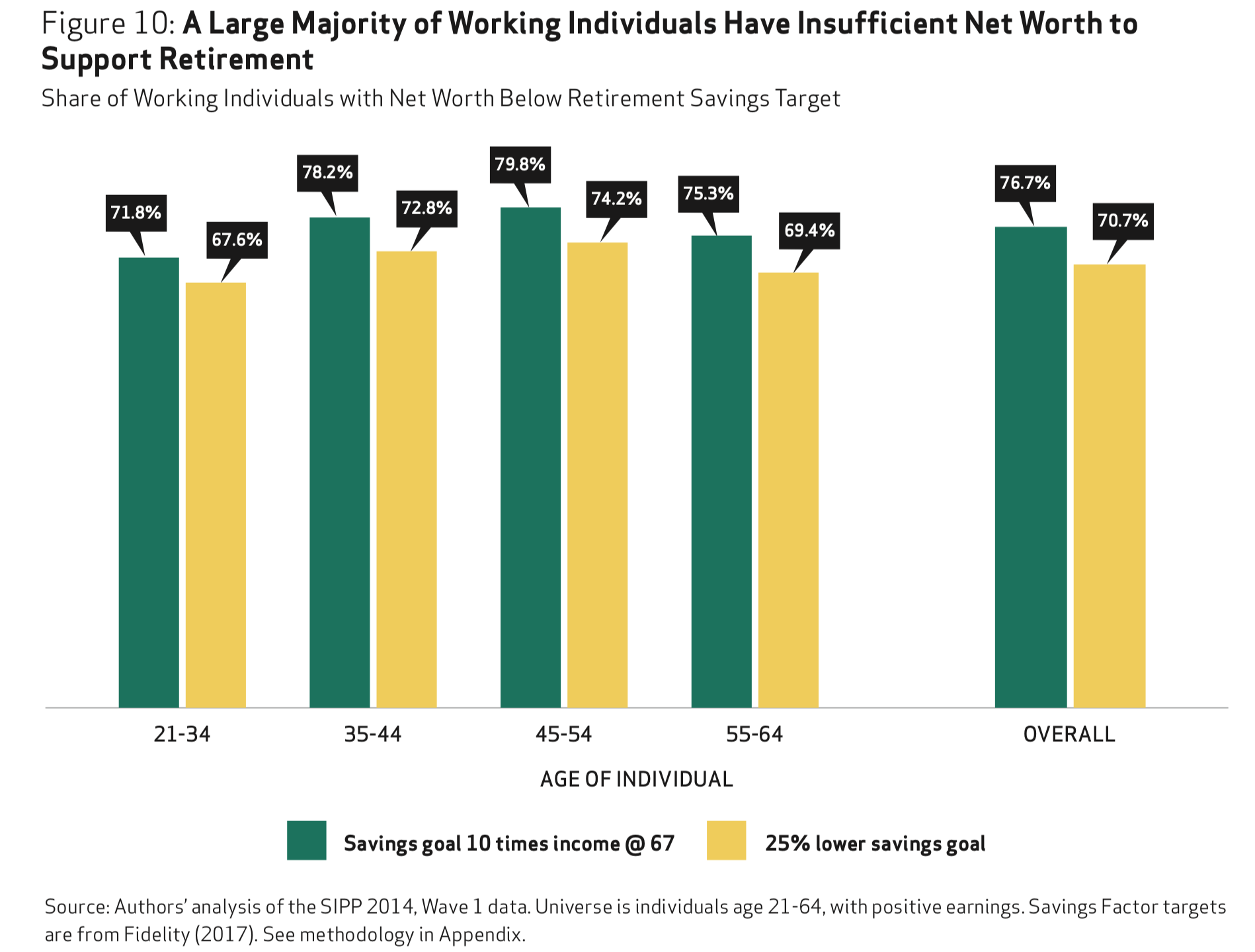 To these grim stats, we have to add in the likely additional challenges that will be brought by the coming epidemic of failures of underfunded public and private pension plans, the loss of jobs due to automation/outsourcing/competiton from younger workers/layoffs during the next recession, the extra years of funding demanded by longer lifespans, falling home and asset prices as interest rates rise, and the vaporizing of any existing savings as the Everything Bubble finally bursts.

We’re already seeing a new term appear in the research: senior poverty. We’re going to hear this term a lot more over the coming decades

Keep in mind that things have gotten this bad during the longest bull market in US history. How much worse will it get during the next downturn?

The problem is growing as more Baby Boomers reach retirement age—between 8,000 to 10,000 Americans turn 65 every day, according to Kevin Prindiville, the executive director of Justice in Aging, a nonprofit that addresses senior poverty. Older Americans were the only demographic for whom poverty rates increased in a statistically significant way between 2015 and 2016, according to Census Bureau data. While poverty fell among people 18 and under and people 18 to 64 between 2015 and 2016, it rose to 14.5 percent for people over 65, according to the Census Bureau’s Supplemental Poverty Measure, which is considered a more accurate measure of poverty because it takes into account health-care costs and other big expenses. “In the early decades of our work, we were serving communities that had been poor when they were younger,” Prindiville told me. “Increasingly, we’re seeing folks who are becoming poor for the first time in old age.”

This presents a worrying preview of what could befall millions of workers who will retire in the coming decades. If today’s seniors are struggling with retirement savings, what will become of the people of working age today, many of whom hold unsteady jobs and have patchwork incomes that leave little room for retirement savings? The current wave of senior poverty could just be the beginning. Two-thirds of Americans don’t contribute any money to a 401(k) or other retirement account, according to Census Bureau researchers. And this could have larger implications for the economy. If today’s middle-class households curtail their spending when they retire, the whole economy could suffer.

OK, so the masses are screwed. Retirement is nothing but a pipe dream for them.

But what about for you?

Will Your Retirement Fail To Launch?

When attempting to shoot a rocket into space, you need to make sure it’s travelling fast enough to get out of the Earth’s gravity well.

Not enough speed, and your rocket plummets back to the ground (catastrophically). Just enough speed gives your rocket orbital velocity, where it stays in contant motion circling the Earth. Anything faster than that achieves escape velocity, sending your rocket out into the larger solar system: 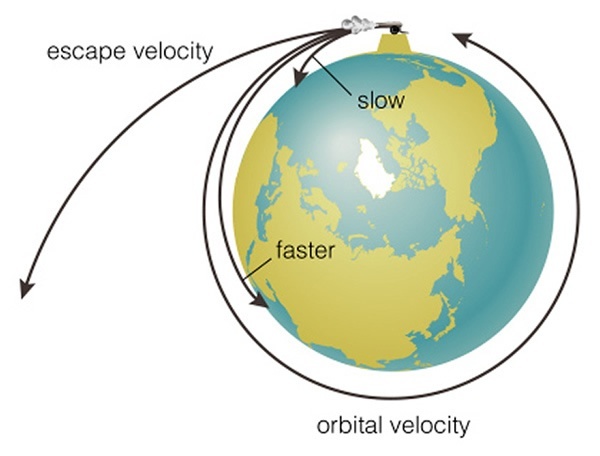 This is a good analogy for retirement planning:

The critical question each and everyone reading this needs to ask themselves is: Are my retirement efforts on track to achieve escape velocity?

Statistically, for most of you, the truthful answer is: No.

So get started by getting clear about what your current shortfall may be (we’ll talk about steps for addressing any shortfall later on below).

As a jumping off point, use the Multiply By 25 Rule. Many financial planners use this as a general rule of thumb: to be able to afford to retire, you should have at least 25x your desired annual income saved up before you hang it up at the office.

What’s your current household’s annual burn rate? Do you want to maintain that same standard of living as a retiree, or are you willing (and able?) to get by on less?

Don’t forget that the older you live, the higher the probability you’ll need to enter assisted living or a nursing home at some point. Here are some figures for you on that (from the Genworth 2017 Cost of Care Survey):

Whatever the final estimate, given your current savings rate, is it realistic to expect you’ll have 25 times that amount saved by the age you’d like to retire?

If you’ve never yet done this simple math, do it now.

If the numbers reveal you’re on or ahead of track, congratulations! And if not, at least you have a sense of what the gap is and can get to work on devising a credible plan for either closing it or ratcheting your retirement goals downwards.

(Of course, the Multiply By 25 Rule is just a rough guideline. The correct multiple for you may be higher or lower depending on your personal situation and goals. As always, we recommend working with your professional financial advisor — or the one we endorse at Peak Prosperity — when developing your retirement plan.)

For as they say, to fail to plan is to plan to fail. Workers who plan to fail rarely succeed in achieving retirement escape velocity:

The media is increasingly peppered with heartwrenching stories of seniors unprepared to support themselves.

Many have spent their lives working, but were simply unable to put enough away:

Scott, a divorced mother of two grown children, has been teaching for over a quarter century but never received the tenured position she hoped for. After years of financial struggles — including the loss of a home — she has no money saved for retirement.

Some are seeing their cost of living escalate much faster than expected, depleting their savings more quickly:

Property taxes are up 38 percent year-over-year in Clark County, Nevada.

Others are learning that the pension promises made by their employers are in jeopardy:

A pension plan covering more than 72,000 truck drivers and warehouse workers represented by the New England Teamsters union is the nation’s second most underfunded multiemployer pension plan, and is on track to run out of money within a decade, according to a new study.
Nationwide, the study said, 121 multiemployer plans covering 1.3 million workers are underfunded by a total of $48.9 billion and have told regulators they could slip into insolvency within 20 years.

And remember, this is all happening at a time of record-low unemployment, low interest rates, record high stock and real estate prices, 3%+ GDP growth, and relatively affordable energy prices:

Again we have to ask: How much worse will things get when the next recession hits?

Everyone reading this is on a one-way path to old age. Whether you plan ahead for it or not.

For the majority of us who hope to avoid spending the rest of our lives *having* to work but do not yet have our retirement fully funded, the following strategies will prove critical:

So the good news is that the retirement dream is still attainable. You’re just going to have to remain laser-focused and disciplined in your pursuit of it.

There are strategies and behaviors that, if adopted now, will make it much more likely for you to be able to afford to retire — and in a way you can enjoy.

If you haven’t already read it, be sure to read our report Success Strategies For Retirement by Charles Hugh Smith. It details out a number of the best practices needed for a solvent retirement in today’s environment, including providing 14 specific action steps you can start taking right now in your life that will materially improve your odds of enjoying your later years with grace.

For far too many Americans, “retirement” will remain a perpetual myth. Don’t let that happen to you.