“I was satisfied that I wasn’t personally to blame and that I hadn’t known about those things. I wasn’t aware of the extent of the crimes.
But one day I went past the memorial plaque which had been put up for Sophie Scholl in Franz Josef Strasse, and I saw that she was born the same year as me, and she was executed the same year I started working for Hitler.
And at that moment I actually sensed that it was no excuse to be young, and that it would have been possible to find things out.”
Traudl Junge, Hitler’s Secretary

What is surprising is not that we are called to do so much, but rather, so little.
Love and be grateful to God, treat people as you would like to be treated with respect, kindness, mercy and forgiveness.  Do not lie or steal or cheat,  do not be proud and look down on your fellow creatures, and act with honor and respect for the gifts of His creation.
And when we fail through weakness, we are readily forgiven if we are but genuinely repentant for our misdeeds, by action or omission.
But all too often we bargain away our souls, one piece at a time, rebelling from even these small and reasonable requests to goodness—  and for relatively so little in return.   A little more money, some prestige and recognition from the worldly, and a feeling of being superior to the rest of humanity.  They are fools, but I am smart, and fully deserve everything that we have been given, owing nothing to anyone, including God.
And we may hold on to that poisonous bargain out of stiff-necked, stubborn pride and a willful blindness to repent and admit our errors, until we fall into the abyss, often bringing our family and friends with us.  Misery loves company, and the sinful insulate themselves from a recognition of the foulness of their hearts by attempting to convert those around them to the same wickedness.
You will serve what you love the most, and sacrifice for the love of what you serve.  Whether it be God, a political ideology, yourself, or some other idol of the world.  No one can serve two masters equally.
But I do strongly fear that we are once again fallen into a time of general apostasy from those things that make us fully human.   And I am afraid that most will be deceived, even among the faithful.

“Again, the devil took him to a very high mountain and showed him all the kingdoms of the world and their riches and splendors.  ‘All this I will give you,’ he said, ‘if you will bow down and worship me.’”

For what does it profit a man, to gain the whole world, but lose his soul. 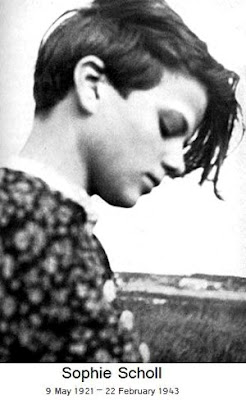 The White Rose
Second Leaflet
Munich, 1942
We will not be silent.
It is impossible to engage in intellectual discourse with National Socialist philosophy, for if there were such an entity, one would have to try by means of analysis and discussion either to prove its validity or to combat it. In actuality, however, we face a totally different situation.
At its very inception this movement depended on the deception and betrayal of one’s fellow man; even at that time it was inwardly corrupt and could support itself only by constant lies. After all, Hitler states in an early edition of “his” book (a book written in the worst German I have ever read, in spite of the fact that it has been elevated to the position of the Bible in this nation of poets and thinkers): “It is unbelievable, to what extent one must betray a people in order to rule it.”
If at the start this cancerous growth in the nation was not particularly noticeable, it was only because there were still enough forces at work that operated for the good, so that it was kept under control. As it grew larger, however, and finally in an ultimate spurt of growth attained ruling power, the tumor broke open, as it were, and infected the whole body.
The greater part of its former opponents went into hiding. The German intellectuals fled to their cellars, there, like plants struggling in the dark, away from light and sun, gradually to choke to death.
Now the end is at hand. Now it is our task to find one another again, to spread information from person to person, to keep a steady purpose, and to allow ourselves no rest until the last man is persuaded of the urgent need of his struggle against this system. When thus a wave of unrest goes through the land, when “it is in the air,” when many join the cause, then in a great final effort this system can be shaken off.
After all, an end in terror is preferable to terror without end.
We are not in a position to draw up a final judgment about the meaning of our history. But if this catastrophe can be used to further the public welfare, it will be only by virtue of the fact that we are cleansed by suffering; that we yearn for the light in the midst of deepest night, summon our strength, and finally help in shaking off the yoke which weighs on our world.
We do not want to discuss here the question of the Jews, nor do we want in this leaflet to compose a defense or apology. No, only by way of example do we want to cite the fact that since the conquest of Poland three hundred thousand Jews have been murdered in this country in the most bestial way.
Here we see the most frightful crime against human dignity, a crime that is unparalleled in the whole of history. For Jews, too, are human beings – no matter what position we take with respect to the Jewish question – and a crime of this dimension has been perpetrated against human beings.
Someone may say that the Jews deserve their fate. This assertion would be a monstrous impertinence; but let us assume that someone said this – what position has he then taken toward the fact that the entire Polish aristocratic youth is being annihilated? (May God grant that this program has not yet fully achieved its aim as yet!)
All male offspring of the houses of the nobility between the ages of fifteen and twenty were transported to concentration camps in Germany and sentenced to forced labor, and all the girls of this age group were sent to Norway, into the bordellos of the SS!
Why tell you these things, since you are fully aware of them – or if not of these, then of other equally grave crimes committed by this frightful sub- humanity? Because here we touch on a problem which involves us deeply and forces us all to take thought.
Why do German people behave so apathetically in the face of all these abominable crimes, crimes so unworthy of the human race? Hardly anyone thinks about that.
It is accepted as fact and put out of mind. The German people slumber on in their dull, stupid sleep and encourage these fascist criminals; they give them the opportunity to carry on their depredations; and of course they do so.
Is this a sign that the Germans are brutalized in their simplest human feelings, that no chord within them cries out at the sight of such deeds, that they have sunk into a fatal consciencelessness from which they will never, never awake?
It seems to be so, and will certainly be so, if the German does not at last start up out of his stupor, if he does not protest wherever and whenever he can against this clique of criminals, if he shows no sympathy for these hundreds of thousands of victims. He must evidence not only sympathy; no, much more: a sense of complicity in guilt.
For through his apathetic behavior he gives these evil men the opportunity to act as they do; he tolerates this “government” which has taken upon itself such an infinitely great burden of guilt; indeed, he himself is to blame for the fact that it came about at all…
Please make as many copies of this leaflet as you can and distribute them.

See also  THIS IS WHY EMPLOYERS ARE WILLING TO PAY WOMEN TO ABORT ELSEWHERE: It costs $20,000 to give birth in the US, study finds.
See also  This economy is shitting the bed harder than most understand or are willing to accept...
Help Support Independent Media, Please Donate or Subscribe: Trending: Views: 2

4 thoughts on “Willing Blindness and the Gradual Seduction to Evil”